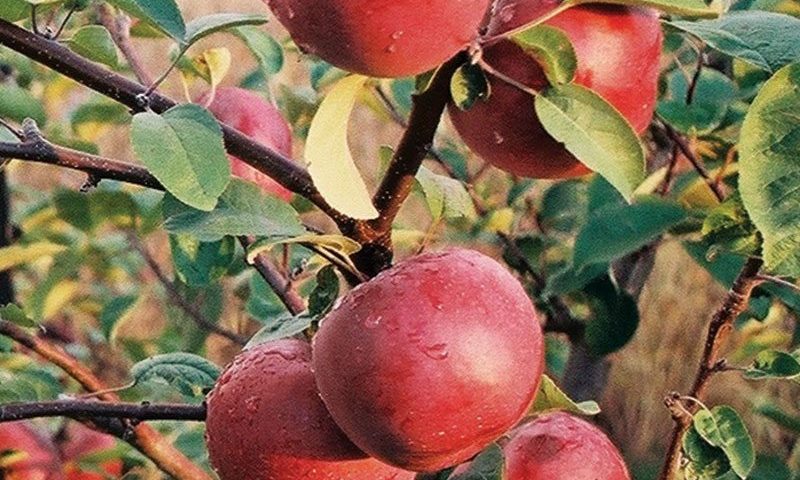 McIntosh apple was discovered as a chance seedling by John McIntosh in the early 19th century. While the exact parentage is unknown, it is thought that Fameuse (snow apple) is possibly one of the parents as it has the same distinct flavor that McIntosh has. McIntosh is truly an heirloom apple that is still popular today. While excellent for eating and cooking, it is not a crispy apple. It excels for making smooth textured applesauce that cooks up quickly.

We offer this variety on M7 rootstock which is semi-dwarf and free-standing.

This variety is extremely susceptible to apple scab and also is known for lots of fruit dropping off the trees just as the fruit nears maturity. All McIntosh and many McIntosh crosses show this characteristic. Since apples are prone to many insect and disease issues, preventative spraying or growing the fruit in bags (organic) is suggested to obtain a quality fruit crop. Find a spraying guide and more information on Best Pesticides For The Home Orchardist.

Although McIntosh originated in Canada, it was brought into the U.S. early in the 19th century. It does best when grown in cold climates and thrives especially well in the New England area and in other areas with similar growing conditions. A very popular variety in Wisconsin. Fruit quality can be poor when this variety is grown in the south or west coast where they have long hot summers. McIntosh has been designated the national apple of Canada.

McIntosh Apple must be cross-pollinated with a crabapple or different apple variety to produce fruit.