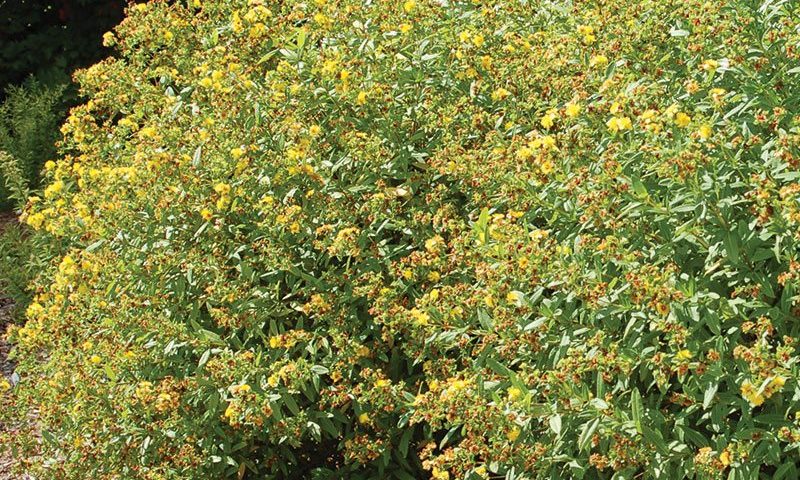 St. John’s Wort is an adaptable, small-stature shrub that works well as a mass, border, wildlife garden, or for naturalizing a space. Its long flowering period (up to six weeks) makes it an excellent choice to add long-lasting midsummer color.

St. John’s Wort is an excellent nectar source for bees, butterflies and hummingbirds. Expect to see many visitors on this plant in midsummer with its showy flowers. Birds, such as Finches, will eat the seeds during the winter months.

If you desire to shape St. John’s Wort, use the Haircut Method for pruning. You can also shear off the seed heads in early spring before new growth occurs.

St. John’s Wort has no major pest issues, further cementing it as a tough, durable plant.

St. John’s Wort is a native Wisconsin shrub found in a variety of sites, although usually on rocky and sandy soils. It is a component of both our Sand Dunes and Sedge Meadows. When traveling through central Wisconsin or Door County in June, keep an eye out for the profuse yellow flowers of St. John’s Wort.

After shedding its leaves in fall, St. John’s Wort shows off its attractive exfoliating bark on the older stems. Its younger stems are distinctly four-sided- a good trick if you’re trying to identify this plant in the wild.

St. John’s Wort is named for the feast day of St. John the Baptist, which happens to be during the plant’s heaviest flowering. Wort is a historic word for plants which were known for medicinal properties or food.

The specific epithet kalmianum is named after Peter Kalm, the student of Linnaeus that discovered the plant in the mid 18th century.

490 species of Hypericum exist in the wild. Not all are shrubs, however- they range from forbs to even small-stature trees! The genus is divided into 36 sections, which are further divided into their own subsections. St. John’s Wort belongs to the Myriandra subsection, which includes shrubs and perennials that can grow up to 15 feet tall.