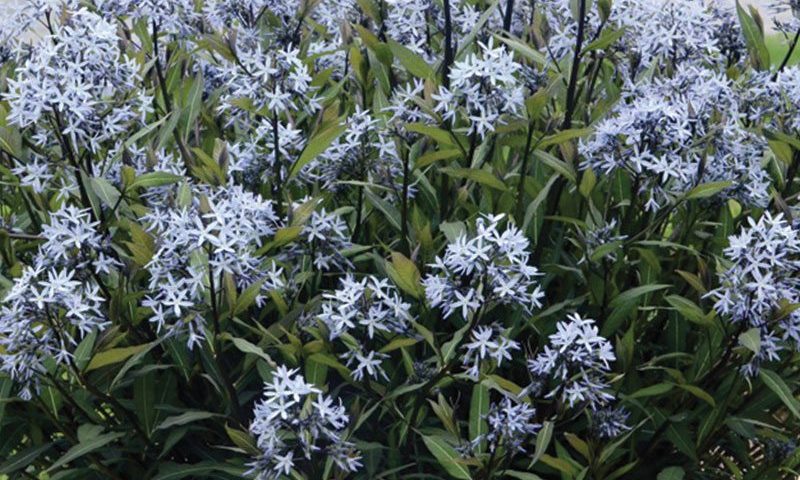 We’re excite to announce the 2017 spring plant draft picks. Tulip blooms dotting the landscape aren’t the only sign that spring has arrived. Football fans eagerly watch to see who their favorite teams will acquire to create a winning line up in fall. These players are fresh out of college teams, full of hope, skill, waiting to be tested in the real world. This process reminds me a lot of the new plant varieties flooding garden centers. “Ooohh, that one is tempting, but will it do well in my yard? Is it worth the high price point, just for its newness? Will it become aggressive or not survive at all?”

I’ve created my own list of 7 Spring Plant Draft Picks. Newbies that show promise and cause my horticulture heart to flutter.

I love Willowleaf Amsonia. Its airy green leaves provide a great texture in the garden and can be used in a grouping or as an accent, due to its shrub-like proportions. What I don’t like is how readily it reseeds in the garden if you don’t cut it down before the pods burst. Also, it has rather short-lived spring color. ‘Storm Cloud’ might be a game changer. In spring, new stems emerge almost black with silver-veined green leaves. The light blue flowers are a stunning contrast with the smoky stems and, supposedly, has an extended bloom time.

Aralia cordata is also known as Japanese Spikenard (we have a native version that is great for dry shade Aralia racemosa). In Japan, young aralia shoots are a culinary treat, said to taste like asparagus (could find no info on if it has the same effect on urine). However, the new variety Sun King, I wouldn’t waste on the dinner plate. The golden leaves might be just what I need to brighten the narrow, shade garden on the side of the house.

I’m also excited about this yellow version of Elderberry. In the past, I was underwhelmed with an older, larger version called ‘Sutherland Gold’. I thought it never looked as good in person as in photos. Plus I’m not willing to give up so much space in my yard to an Elderberry. Lemony Lace™ would be perfect in a corner that gets morning sun. The large clusters of white flowers emerge in early spring, before the finely dissected bright yellow foliage, edged in red. The bright foliage ages to an attractive chartreuse. The bright red berries in fall attracts birds and wildlife.

Nikko Slender Deutzia has been around for a while, a real showstopper when the pearl-like white buds open to star-shaped flowers. Yuki Cherry Blossom™ has emerged on the scene as a dwarf alternative with deep pink buds that open to masses of pale pink flowers. It has the same willow-like foliage that turns a deep burgundy-purple in fall. Could be a nice option under low windows. However, unless they have also bred repellent qualities into the shrub, I’m assuming that I’ll still need to spray it to keep the rabbits away.

Gro-Low Sumac has been an MVP, by default, for a shrubby groundcover to stabilize slopes and it is used in almost every mall parking island. But until it turns bright red in fall, I don’t think Gro-Low is very interesting. The University of Connecticut has introduced a tempting alternative. Adaptable from moist to dry soils, it has the same white flowers of native Black Chokeberry, followed by the same blue-black fruit (loved by birds) and brilliant red fall color. The only downside I anticipate from this plant is that the rabbits will probably chew on it over winter. But that could also be a benefit- consider it as “natural pruning”. As I write this, we expect Low Scape® to arrive in late July, so if you are interested, definitely reserve them!

Tor Birchleaf Spirea is one of my favorite shrubs. I only wish it bloomed longer, and maybe came in another color. Pink Sparkler™ Spirea is Tor’s flamboyant new sister. Though a little larger than Tor, Pink Sparkler™ has a natural rounded shape that requires little pruning and great burgundy fall color. An introduction from the Bailey Nursery First Editions® program, she breaks the mold with masses of early summer pink flowers, then re-blooms in the fall, with smaller-sized flowers.

Zagreb Coreopsis is an old, trusted perennial for a sunny garden. Able to withstand hot, dry conditions, it will happily spread to fill whatever space you allow. But the gold flowers can be a bit too bright. In 1992, the spin-off variety ‘Moonbeam’, with soft yellow blooms that were touted to last for months, was named the “Perennial of the Year”. People went nuts for it, pounding down the doors of garden centers, foaming at the mouth, like werewolves. Alas, reality did not live up to the hype and ‘Moonbeam’ was a dud. It lacked vigor and rarely survived the winter. But like a phoenix, a new ‘Full Moon’ is rising, sure to excite the werewolves again. Full Moon Coreopsis could be worth the hype of its older counterpart. It is said, the 3″ flowers are held aloft on strong stems and will bloom from summer into early fall. Is it another myth? A marketing ploy? Only time will tell.

Like the NFL Draft, those who get to choose first have the best selection. Since these are all new 2017 spring plant varieties, availability will be limited and I highly recommend calling ahead to see if the plants are in stock, or better yet, reserve the plants in advance. I did. Gardening isn’t a game, people. It’s survival of the fittest- only the strong plants will survive. It’s competitive- who hasn’t bragged to a fellow gardener about having something they don’t? It’s not a hobby, it’s a way of life. If you cut me, I bleed green. Go Team!