A Tree For Me, Hickory 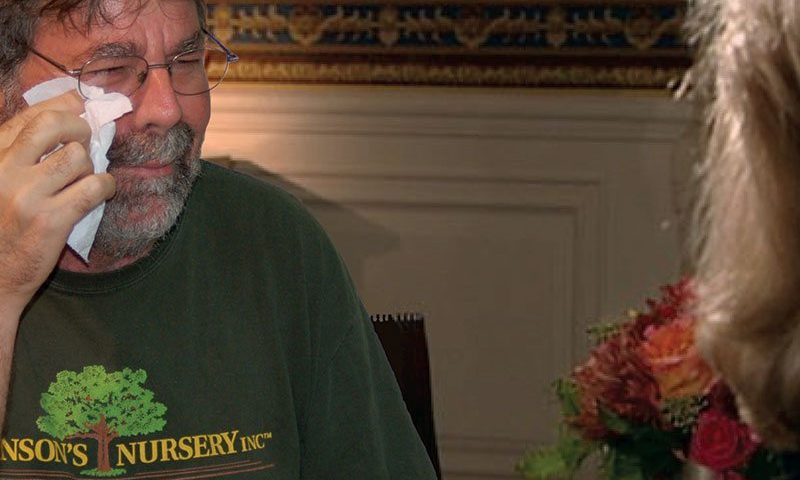 A Tree For Me, Hickory

If I were to be so fortunate as to someday be interviewed by Barbara Walters, I would be ready to answer her famous question, “If you could be a twee, what kind of twee would you want to be?” (“twee”, meaning “tree” in Barbara Walter-eese).

A Shagbark Hickory to be specific. You see, just thinking about the tree brings back sentimental thoughts of my youth. It brings a tear to my eye. Barbara Walters would be proud. She loves to make people she interviews cry. She loves to tear at your heartstrings just like Shagbark Hickories do to me.

When I was a little boy, as far back as I can remember, my brothers and sisters and I would go out to the creek. This was a wild area only a few blocks away from our home on the south side of Burlington, Wisconsin in western Racine County. We’d pack a lunch, or mom would, and off we’d go for a day of fun and adventure in our native woods.

Us kids, aged 7 to 12 or so, would visit our favorite trees to load up on hickory nuts to later crack on the concrete stoop that was our front porch. It was a big event. We prepared for it each year. We would scout out the trees weeks beforehand to see which ones had nuts. There was only one tree that would produce every year. The others would bear fruit every other year. When they were ready, we would gather them and put them in piles under the trees. Then we would husk them so that we wouldn’t have to haul home extra weight. We’d fill multiple paper grocery bags full of nuts. We were very productive, squirrelly kids.

It wasn’t like it was work though. We’d have fun! Nature’s distractions were all around us. We’d throw sticks and husks at each other or go over by the creek to see if there were any frogs. There was just a lot of cool stuff out by the creek and hickory nuts were just one of those things.

Once we got back home we would get some hammers and start cracking. As I said before, we’d go on the front stoop of the house. Cracking Hickory nuts is a fine art. Getting them out in the biggest piece possible was the desired feat. If you got an entire half of nut meat out in one piece, you’d scream for joy! Most of the time it was tiny bits and pieces with an occasional shell mixed in. This could be extremely painful if you vigorously chewed on your tasty accomplishment which we usually did. It was competitive nut-cracking. The reward was to be able to stick a handful of half nut-meat pieces into your mouth and smile as your cohorts watched you. We sure had fun!

Just like out in the woods we would eventually get distracted and go running from our positions on the front stoop to go play games in the back alley or some other kid activity. Meanwhile the hammers, bags of nuts, and bits and pieces of broken shells were strewn all over in the front of the house. You wouldn’t believe how far some of those shells will fly when hit with a hammer. Anyway, our mother used to like to walk around in her stocking feet. When she would eventually encounter one of the sharp shells she’d scream at us to clean up the front porch. We’d scatter even further than the nut shells. This would happen every fall, as sure as you could count on the trees turning color.

That was Hickory nut season then and it sticks with me to this day. I’ll love those trees forever.

After growing of Hickory nut trees here at Johnson’s Nursery. I’ve come to appreciate them in an adult way, but no more important way than I knew as a child.

Hickories have been used by people for numerous purposes over the years. Native Americans used hickory wood to make bows for hunting. A syrup flavored by an extract from Shagbark Hickory bark was used by Native Americans and is currently a delicacy in fine restaurants throughout the U.S. Hickory is a favorite wood to use for smoking meats. Because of its strength, durability, and beauty, hickory lumber is used to make furniture, paneling, dowels, tool handles, and ladders.

There are two species of Hickory native to Wisconsin, Shagbark Hickory (Carya ovata) and Bitternut Hickory (Carya cordiformis). They are closely related to Pecan (Carya illinoiensis) which is good eating in its own right (and a lot easier to crack). Unfortunately, it’s difficult to get Pecans to bear nut crops in the short Wisconsin growing season. That’s why Shagbark is the Carya species of choice for our area. Both native species are not commonly found in garden centers, yet both are successfully grown by Johnson’s Nursery. Serious disease and insect problems are not common on Carya species in southeast Wisconsin. I have seen a canker disease, probably Poria spiculosa, doing significant damage to trees east of Portage, WI.

Shagbark Hickory is native to every state bordering the Mississippi River and east with the exception of Florida. In Wisconsin, the tree is quite common in the southern half of the state, but is not native up north. It is most prevalent in dry, open woodlands. You’ll often see it with Hill’s Oak (Quercus ellipsoidallis), Bur Oak (Quercus macrocarpa), White Oak (Quercus alba) and Black Cherry (Prunus serotina) to name a few. Where it really excels is on sandy soils where Sugar Maple (Acer saccharum) struggles. It will tolerate heavier soils and performs perfectly well in them. It is just not as competitive in these soils in the wild. Shagbark Hickory is easily identified by its long exfoliating 1-2” wide strips of gray bark. Its leaves are 8-14” long with leaflets that range from 4-6” long and ½ to 2-1/2” wide. Fall color ranges from clear yellow to rusty-orange to tan to golden brown. Individuals are quite variable in fall color. One of the most ornamental characteristics of the tree is its colorful new growth as it first emerges in the spring. The beautiful pinks and chartreuses are as dramatic as most flowers. The nuts are typically borne every other year in husks that are 3/16” to 3/8” thick and, of course, are the tastiest of any nut in existence. My grandmother used to feed all the kids in the neighborhood her famous chocolate chip cookies. When she put Hickory nuts in them, they weren’t as readily available to the neighbors. They had to be rationed.

As an adult with experience and education, my Hickory nut picking and cracking have become more sophisticated. Let me explain. Each hickory tree grown from seed has nuts with their own unique set of genes which determine its nut characteristics; just like us humans each have our own individual characteristics. All the nuts from a particular hickory tree will be identical. So each tree will have nuts with their own specific size, shape, and convolution pattern on the inside. It’s just like an apple tree bearing apples with a distinct size, shape and taste. It’s just like each of us having our characteristic finger print that differentiates us from all others. The same goes for Hickory trees. You may be wondering why I am going on and on about this. It all relates to getting the Hickory nuts out in halves instead of little bits and pieces. I’m still obsessed with that. The point I want to make is that some Hickory trees produce nuts that can be more easily cracked out of the shell in big pieces. Some have convolution patterns in the interior of the nut that are not as deep as others. This convolution pattern is called the key (see picture to left). When the key has shallow convolutions it is much easier to get the nuts out in halves. Bingo!!! This is the point. This is the answer to the ultimate question of how to have consistent hickory nut cracking success! You check the trees for their key before picking them up so you only gather from trees that will increase the likelihood of cracking out in halves. This is done by cutting the nuts tangentially to see the key before picking up quantities of the nuts. This technique will allow an increase in cracking efficiency. Selecting nuts with thinner shells and using improved nut crackers rather than a hammer can make things even better.

Left: Shagbark Hickory keys. The top are two identical nuts from the same tree with the same key. The bottom is three different keys from three different trees | Right: Hunt’s Nut Cracker, one of the best for Hickory

The other species of Hickory native to Wisconsin is Bitternut Hickory (Carya cordiformis). This tree differs from Shagbark with sulfur yellow buds that are quite noticeable in the winter. It has a smooth gray bark without any exfoliation. Mature specimens can have a vase form similar to an elm. Bitternut Hickory is most commonly found in Sugar Maple or Oak forests in more moist shady situations than you would find a Shagbark Hickory. They are quite common in the hedgerows around the nursery in Menomonee Falls. The nuts of Bitternut are not edible as they are very high in tannins. Squirrels and chipmunks usually avoid them for a while until they have run out of their preferred foods. The nuts are generally smaller than Shagbark with a thin husk that is about 1/16” thick. It is a fast growing hickory when compared to Shagbark. We can grow Shagbark Hickory to 1-1/4” diameter in about 10 years. A Bitternut Hickory will reach that same size in about 8 years. It is a gorgeous tree and should be used more for landscaping.

Growing Hickories is a slow process. However, contrary to much that is said about them being difficult to transplant B&B, we have not found this to be the case. We can successfully dig both native Hickory species in late fall and early spring with very few losses. Watering and mulching is critical to success in the first two years of establishment. You must make sure they have an even supply of water available to the newly establishing root system throughout this time period.

I hope I have been able to touch each and every one of you with a bit of my Hickory knowledge and sentimentality. Just remember.

When you are no longer hearing from me,
and you see a Hick-o-wee,
take a close look at the twee,
It could be me!!!!