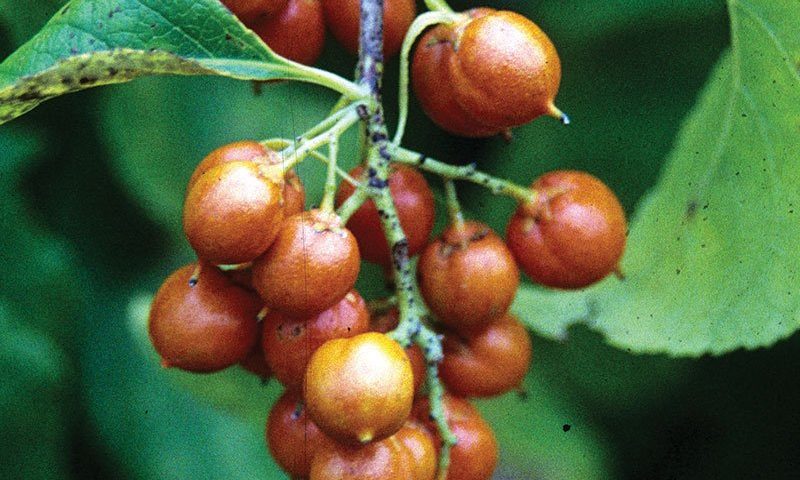 American Bittersweet is a Wisconsin native climbing vine with colorful clusters of orange fruit capsules that open to reveal red seeds. Celastrus scandens is dioecious, meaning you need a male and a female plant to get fruiting. This is a multi-season vine, offering fragrant white flowers in spring, dense foliage in summer, with fall color and a fruit display in autumn.

It’s a great option for woodland gardens and naturalized areas. As a fast-growing vine, it quickly covers fences, arbors, trellises, posts, walls, or other structures in the landscape. It can also be used as a groundcover to camouflage rock piles or old tree stumps.

It is a prized plant by florists as a cut plant for its orange berries or branches in dried arrangements.

Although reported to be poisonous to humans (all mammals), the fruit is attractive and desirable for all birds in fall and winter.

Prune off any dead or diseased vines in the fall all the way back to healthy wood. Old shoots that have not produced berries or are crowding out newer growth can be pruned off as well. Do not remove more than 20% of the plant in a season. Pruning can also be done in late winter while the plant is still dormant to encourage lush new growth.

American Bittersweet has no serious insect or disease problems.

Avoid growing vines up small trees. This can rapidly girdle trunks and branches, leading to the death of the tree. American Bittersweet suckers quickly to form large colonies. Euonymus scale and two-marked treehoppers may cause significant damage in some areas.

American bittersweet grows over the eastern two-thirds of the US (except for Florida), on the western edge of the range from Texas and Oklahoma to Wyoming and Montana, and across southeastern Canada from Saskatchewan to New Brunswick. All parts of this plant have been reported to be poisonous, but the inner bark has been used by Native American tribes as an emergency food source.

Hydrangea, Chinese Lantern, Ornamental Grass. Hydrangeas have similar foliage but produce large flowers that can compliment berry clusters. Chinese Lantern Plants (which we do not sell) have a similar look and mature at the same time (at the end of the growing season – early fall) if you want consistency from a companion plant. Grasses will help fill in and cover the bottom of the vine as it matures upward.