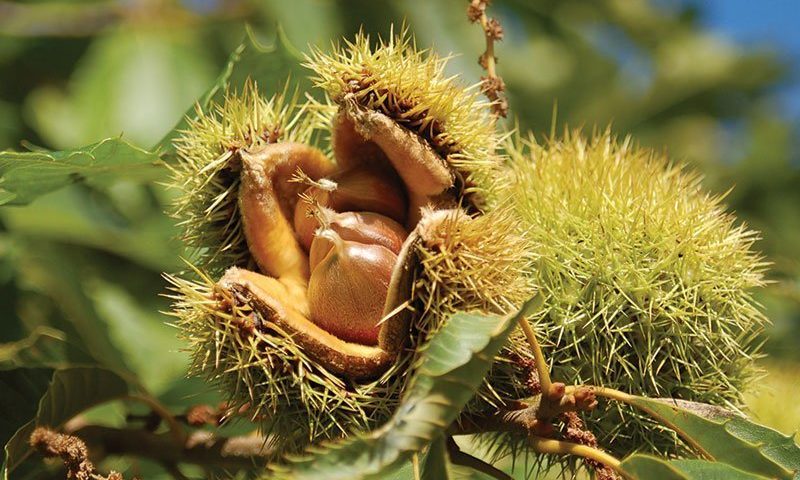 Over a hundred years ago, American Chestnuts were so common that it was said that a squirrel could jump from tree to tree all the way from Georgia to Maine. This commonly quoted statement may be hyperbole, but it sure does paint a picture. The American Chestnut tree was synonymous with our American forests. Mature trees grew to 100 feet and their trunks could reach 5 or more feet in diameter!

The American Chestnut looks beautiful in full bloom with its creamy white catkins on full display at the end of each growing tip. Chestnuts are released in the fall from a spiky husk that is framed by green leaves that are noteworthy for their sharp teeth.

When the blight came it decimated the population within 50 years of its arrival. The economic and ecological effect of the disappearance of the American Chestnut was profound. Since then, countless people have worked tirelessly to attempt to grow an American Chestnut with resistance to the blight.

Today, planting it singly, with no other Chestnut nearby, would greaten its chances of survival. There are very few mature American Chestnuts. The thing they have in common is that they are isolated so there are no other trees in their area that could expose them to the fungus. Wisconsin is slightly off the beaten path of the American Chestnut’s historic range, which roughly followed the Appalachian Mountains. This is advantageous in that the blight, although it does exist in Wisconsin, is not as prevalent. Regardless, the risk of the tree becoming infected is far outweighed by the benefits the tree provides.

An American Chestnut begins producing nuts at about 8 years old. Even if the area in which it is planted proves to have blight, this tree will still produce these high-quality nuts for over a decade. A tree infected with blight will likely live for two decades. Plant the tree, along with other native species to support wildlife.

There was a time when an estimated ¼ of the trees in the forest (this survey was conducted in Pennsylvania) were American Chestnut. Mature trees could produce 10 bushels of nuts or more! For deer, bears, game birds, squirrels, and raccoons this was a major food source. The nuts were more reliable than oaks as the flowers avoided frost damage by blooming in June. The trees grew faster than oak, matured sooner, and the nuts had higher carbohydrates although they are equal to acorns in protein content. The void left by the decimation of the American chestnuts in eastern forests was simply unable to be filled by other trees such as hickory and oak due to their sheer numbers and the quality of the food they provided. Five species of insects are recorded to have become extinct as a direct result of the functional extinction of the American Chestnut. More insect species populations suffered tremendous losses. This is to say, the consequences for wildlife were simply catastrophic.

Trim off any dead branches in early winter/ late spring.

If pruning is necessary, contact a certified arborist to shape your tree for structure and health. We invite you to check out the Arborist For Hire lookup at the Wisconsin Arborist Association website to find an ISA Certified Arborist near you.

Cryphonectria parasitica is the cause of Chestnut Blight. This fungal disease hitchhiked to North America in the trunks of Asian Chestnuts, which were resistant because they had evolved with the blight. Within 50-years of its arrival, the Chestnut blight had rendered the American Chestnut all but extinct. The roots are still viable and produce shoots, but the tree no longer reaches maturity in its native range. This means you could still potentially see an American Chestnut in the forest, but it will not live to old age.

There is no way to quantify the amount of work that has been put into finding a blight-resistant tree. Generations of people. From scientists to regular Joes. For some, the connection to the American Chestnut and the inspiration to plant it comes from stories told by their grandparents. There are many anecdotes of private landowners trying to save their chestnuts by patching cankers and protecting their trunks from infestation by using mud, saran wrap, and even aluminum foil.

Breeding programs, conducted by scientists and concerned citizens, are attempting to propagate a blight-resistant American Chestnut through the selection of the fittest. Some are using genes of blight-resistant Asian chestnut species. Other scientists have focused on the pathogen and injected the virus into the fungus with the hope of slowing its progress. This would give the tree time to heal itself before being girdled by the subsequent canker. All these experiments take time as a tree takes years to grow to the point at which it will demonstrate resistance. Regardless, many hope to walk in a forest and see mature American Chestnuts in the woods once again.

Due to the blight, the chestnuts that you are roasting over an open fire are in fact a chestnut species native to Japan.

People relied heavily on this tree prior to the 1900s. This tree grew fast, tall, and straight, making great, rot-resistant lumber that was used to build housing, fencing, and countless other everyday items. The logging industry provided employment for rural families. The plentiful amount of nuts produced provided not only food but another source of income. Tanneries, which processed leather, used chestnut heavily as it was high in tannic acid, a substance used to soften and darken leather.

Understory plants such as American Filbert, American Elderberry, Zig Zag Goldenrod, Bigleaf Aster, Giant Solomon’s Seal, Ostrich Fern, Spikenard, and Spiderwort would all do fine in the shade of an American Chestnut.