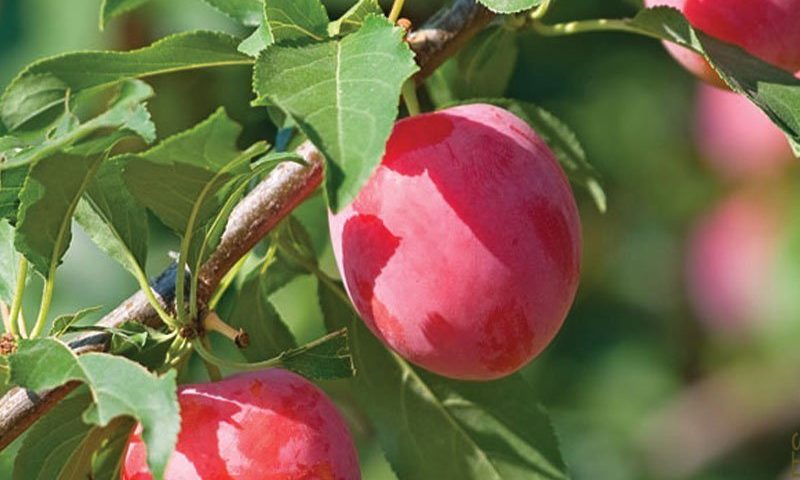 American Plum is a Wisconsin native, large scale shrub or small scale tree that can be grown as a single stem or suckering into a shrubby colony. It’s adaptable to a wide variety of soil and climate conditions, and it produces small white flowers in mid-spring followed by edible red-purple fruits in mid to late summer. A great plant for its wildlife value. May also be known as wild plum, sand cherry, Osage plum, hog plum, and sloe.

American plum is a great small tree or suckering large shrub for a woodland border or other natural setting where full sun may not be possible. Drought resistant, this can make a great windbreak in wide open areas. This Wisconsin native species that provides food and nectar for wildlife while providing a semi-showy, pleasant, white bloom in May.

The fruits are edible to humans, though they will likely not compare with cultivated store-bought plums. Their best use is in jams and jellies where sugar can be added. The plant will generally bear a heavy crop one year, followed by a light crop, and so on.

The plums are eaten by a variety of wildlife including turkey, black bear, grosbeaks, and quail. The suckering habit can provide a dense thicket for birds and other wildlife to shelter in. Twigs and foliage provide moderate-quality browse for deer species. Pollinated primarily by honeybees, it’s also a larval host plant for butterflies such as the Coral Hairstreak, Eastern Tiger Swallowtail, and Spring Azure.

Suckers should be removed if you don’t want the colonizing effect. Do this in the summer once the new growth has flushed. Water during the first growing season to get it established, being careful not to over-saturate the soil. Once established, they will require water only in extended periods of drought. During the dormant season, prune out any dead or diseased limbs. Be sure to sanitize pruners after each cut!

American Plum makes a great, clean single stem large shrub or tree. Or allow the suckers to colonize for a dense hedge thicket.

There are no serious pest and disease issues. A homeowner should be cognizant of its tendency to sucker, and plant for the future when siting. It can also produce thorny lateral branchlets, so care should be taken if children are going to be playing nearby.

American plums generally taste more sour in the eastern part of the country, and sweeter in the west. This phenomenon lends credence to the theory that humans were responsible for dispersing the species westward, by selecting and transporting those phenotypes with greatest eating quality.

The indigenous Omaha scraped and boiled the bark of the tree to make a poultice to treat abrasions. The Mesquakie used a similar preparation to treat canker sores. The Navajo produced a red dye from the tree’s roots.

Create a multi-layered native wildlife hedge by planting with Running Serviceberry (Amelanchier stolonifera) and Prairie Phlox (Phlox pilosa) which will explode with pollinator-friendly flowers in May. You won’t regret it when you are making serviceberry and plum jams and jellies later in summer. Pair as an understory species for Chinkapin Oak (Quercus muehlenbergii) another widely adaptable, hardy species with great wildlife value. For the butterflies, consider planting purple-flowered native perennial species such as Liatris and Echinacea.