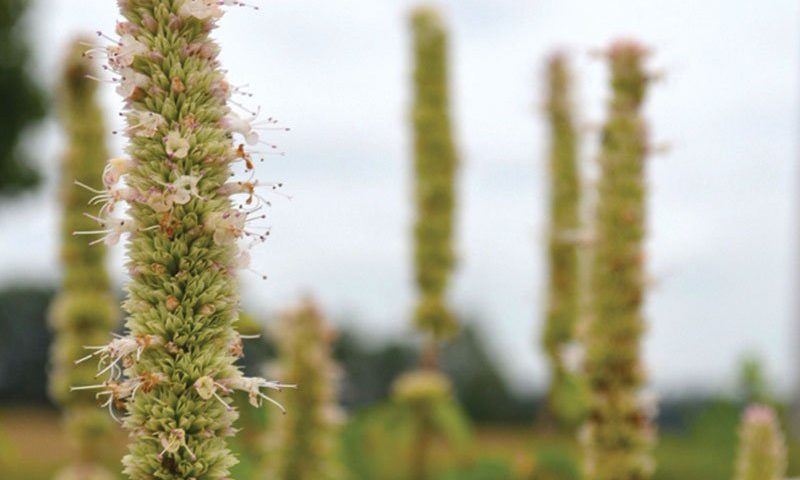 Anise-Hyssop is a Wisconsin native with flowers born on long spikes that can range from purple to pink and white. The flowers bloom for months and, with their high nectar content, attract hummingbirds, butterflies, and insects from July to September. A member of the mint family, the leaves are very fragrant and emit the scent of licorice when crushed.

Anise-Hyssop is found on the banks of streams and rivers, on rocky slopes, and in open forests and forest edges. It is commonly found in moist to wet, disturbed sandy soils, and performs better than Blue Giant Hyssop in hot and dry conditions.

The nectar-rich, ornamental flowers of this perennial make it a popular choice for pollinators, wildlife, and cut flower gardens. When sited well, Anise-Hyssop can reach 6 feet, making it a great choice as a backdrop to smaller perennials, or as a screen to cover unsightly fencing or utility boxes in the background.

We list Anise-Hyssop as not Urban Approved because it will readily spread. If you plant it somewhere that’s mainly dirt or unoccupied space, it will reseed happily.

Anise-Hyssop is a valuable plant for pollinators and a gem for gardeners interested in attracting them. Abundant nectar and a long blooming season bring Halictid bees, leaf-cutter bees, honey bees, bumblebees, hummingbirds, and many types of butterflies to the flowers.

The seeds that appear when blooming act as feed for sparrows and goldfinches.

Deer and rabbits tend to avoid Anise-Hyssop due to the fragrance of the foliage, but there is some anecdotal evidence that suggests they may rely on it at times. Learn more about Deer Protection, Buck Rub & Resistant Plants.

Anise Hyssop is protected in several eastern U.S. states due to the loss of habitat from new construction and loss of farmland, competition from non-natives, and the natural succession of land from disturbed areas, to prairies and meadows, to forest ecotypes.

As an early succession species, Anise Hyssop thrives in the disturbed soils of open fields and meadows and is often short-lived, likely due to being out-competed. Thin out surrounding plants to minimize competition for space and resources.

Anise-Hyssop reproduces by seed and underground stems called stolons. To reduce unwanted spread, deadhead to prevent it from dropping seeds. There will still be some spread through stolons.

The leaves of Anise Hyssop are susceptible to powdery mildew and rust. To help mitigate this, site in full sun and provide enough space to allow for good air circulation.

Genus name: Agastache is formed from two Greek root words, ‘agan’ and ‘stachys’ which when combined mean, “many ears of grain.” This refers to the sight of many flowers spikes while Anise-Hyssop is in bloom.

A decoction of the roots was used as a diuretic by North American tribes. The fragrant leaves are edible and added to tea for flavor.