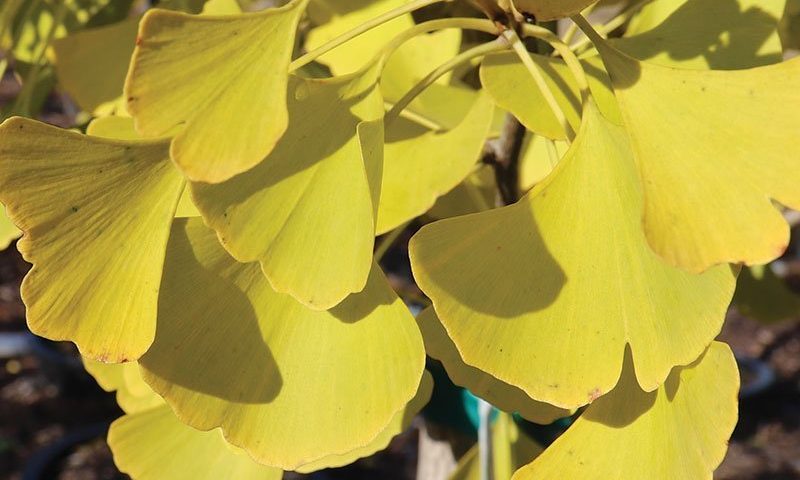 Autumn Gold™ Ginkgo, is a versatile tree with unique fan-shaped leaves. Whether you’re looking for a low maintenance shade tree for your yard or a boulevard street tree, you’ll find Autumn Gold™ can accommodate a wide range of needs. Easy to transplant, this Ginkgo grows in acidic, alkaline, loamy, rich, well-drained and clay soils. The history behind the Ginkgo may just fascinate you as well! May also be known as Maidenhair Tree.

Use Autumn Gold™ Ginkgo for a variety of spaces. It’s an excellent choice for a shade tree, street tree or even as a vertical accenting lawn tree with its outstanding ornamental features. It’s commonly used in city parks and commercial building landscapes. For a narrow space, try cultivar Princeton Sentry® which has a 15’ spread. Use as a specimen tree with rich yellow fall color, creating a golden blanket at the base of the tree when its fern like-fan shaped leaves drop.

For a similar shade tree, but a more columnar canopy, look at Princeton Sentry® Ginkgo.

Little to no wildlife value as Autumn Gold™ Ginkgo is a seedless (male) cultivar, so it does not attract birds. The female Ginkgo produces a fruit which is known to bring an unpleasant smell with it, making it industry standard to sell male cultivars.

Site Autumn Gold™ Ginkgo in a full sun location when available, and part shade when necessary. Ginkgo may grow slow initially in the landscape but will pick up later with proper water supply. It is suitable in a variety of soils ranging from sand and loam to heavy clay, however, do not plant in a poorly drained location. We recommend a 2-3” deep mulch ring around newly planted trees. Autumn Gold™ Ginkgo requires little to no pruning to attain strong branch structure. Ginkgo are known to transplant easily. What a fantastic low-maintenance tree!

Autumn Gold™ Ginkgo does not have any significant pests or problems. As a practically pest-free tree with storm damage resistance you can hardly go wrong with the Autumn Gold™ Ginkgo. Tolerant of sandy to compact clay soil, as well as air pollution this is a strong, long lived tree. It is resistant to gypsy moth, and non-susceptible to Verticillium Wilt.

Autumn Gold™ Ginkgo is a slow growing tree, which in youth can look somewhat sparse. The branching structure will fill out as it matures. This adds to its unique “rick-rack” look during winter.

Ginkgo trees are a living fossil, with leaf impressions dating back 270 million years!! It is also a readily available medicine throughout the world. A lot of trees claim to be resilient, but how many can say their species has survived an Atomic bomb dropped in Hiroshima? Roughly 170 Ginkgo biloba survived the blast in 1945. Talk about a living legend! A true symbol of longevity, this tree will most likely outlive generations to come. A single Ginkgo tree can live for over 1,000 years. Autumn Gold™ Ginkgo, can be expected to do the same.

Pair Autumn Gold™ Ginkgo with part-shade perennials or shrubs at its base, to create a complete look. Consider plants like All Gold Japanese Forest Grass, Hot Lips Turtlehead, Coralbells, Gro-low Sumac, or Creeping Juniper. To create a true Japanese/Zen Garden, add specimen plants such as Dwarf Hinoki Cypress or Niobe Willow to the mix.