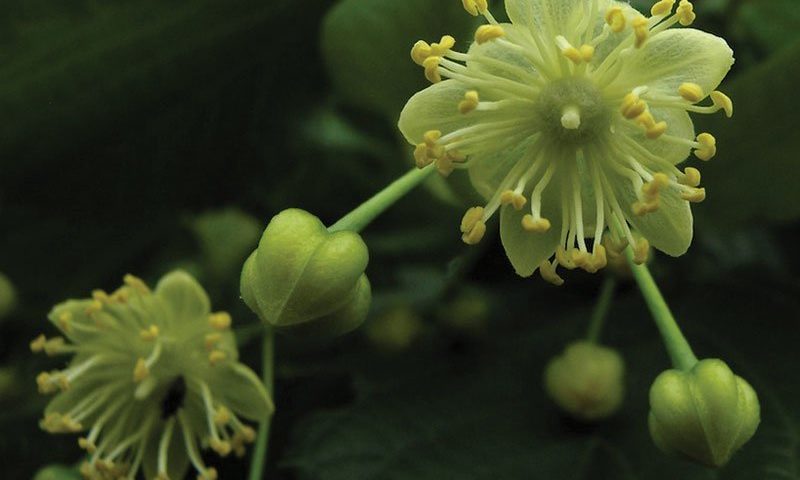 There are so many things to love about this tree I don’t know where to begin! Basswood’s beautiful large green leaves, larger than my hand, set it apart from the rest and provide a nice dense shade. When it blooms, the Basswood comes alive, its aromatic flowers make a high-quality (nutritious) nectar that attracts pollinators from all around. Moreover, the Basswood is tolerant of many soils. Look no further if you want a beautiful, fast-growing, native shade tree!

May also be known as American Linden and Beetree.

Basswood can be used as a shade tree in the landscape as well as a specimen tree due to its aromatic flowers and large leaves.

Use it to naturalize an area as it has great value as a native and is very useful to wildlife.

Many species find basswood delicious. The flowers attract honeybees, bumblebees, and flies. Honeybees prioritize all flowers based on nutritional value and availability. Honeybees prefer this flower to any other flower that blooms during the same time. This results in crops of honey made purely from Basswood nectar. This is a big honey tree for beekeepers. When you stand underneath a Basswood in full bloom and hear pollinators hard at work you will understand why it is also called the Beetree.

Songbirds eat the seeds. Rabbits, mice, squirrels, chipmunks eat the seeds and seedlings as well the stems of the tree. Deer feed on basswood stems, trunk, and leaves. The trunk tends to hollow out after death, providing dens and shelter for wood ducks, pileated woodpeckers, other birds, and smaller mammals.

Be sure to mulch around the base when planted to keep the soil moist. Basswood is not a fan of dry soil, during drought it would benefit from some water.

Trim any branches that grow inward toward the crown during dormancy.

Wrap the trunk or cage the lower part of the tree to prevent rodents and deer from chewing on bark and stems. Check out more on Deer Protection & Buck Rub.

Linden borers make tunnels at the base of trees; very young and very old trees could be damaged. Linden Looper, Basswood Leafminer, Japanese Beetles, cankerworms, Whitemarked Tussock Moth, and the Gypsy Moth can cause defoliation. Mice and voles feed on the stems and could potentially girdle the tree, especially when young. Use a cage to prevent this.

A word on pesticides: Some people may be tempted to use a pesticide as many insects feed on lindens. When the Japanese Beetles descended upon my newly planted Basswood in July, I was indignant. I immediately wanted to go on the defense. But then I remembered that the effect these insects will have on the tree will be aesthetic and are very rarely fatal. This tree is a boon to the wildlife around it.

It is so heavily used by wildlife that the use of a systemic pesticide would be harmful, nay, tragic. In fact, many systemic pesticides state clearly on their labels that they should not be used on lindens (Basswood belongs in this group). Have patience! The insects will eventually move on in their life cycle and in spring the leaves will be good as new. Take comfort in the fact that the tree you have in your yard has contributed to the ecosystem in your neighborhood.

Many diseases can befall the foliage. Anthracnose, black mold, and leaf spot can all affect the leaves but these issues are aesthetic.

Exposed wood from pruning or damage can lead to canker and yellow cap fungi. Pruning during dormancy can help to prevent this.

The largest known Tilia Americana is in Kentucky and measures 102-feet tall with a spread of 85.5-feet!

Tea can be made from flowers. If consumed too often, tea from flowers has been known to cause heart damage. Young leaves can be eaten raw or cooked. The sap is said to be sweet and refreshing and can be boiled down into syrup.

Wild Basswood is found in forests along with Sugar Maple, American Beech, Ash, Shagbark Hickory, and Oaks. In western Wisconsin, it grows in forests alongside Sugar Maple as a dominant species. Native Wisconsin shade-loving perennials and groundcover such as Spikenard, Giant Solomon’s Seal, and Canada Wild Ginger would be at home under a Basswood. Virgin’s Bower, Common Snowberry, and Goldenrods do well nearby.