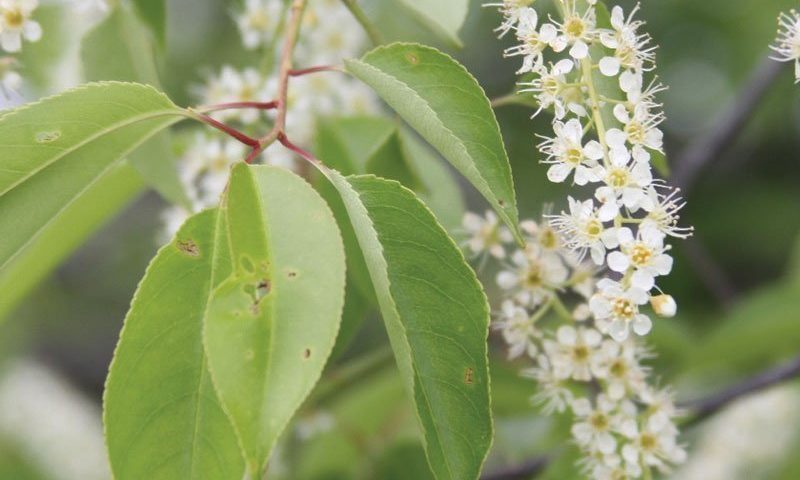 Black Cherry is a medium-to-large sized deciduous tree that is native to much of eastern North American, Mexico, and Central America. It typically occurs in both lowland and upland woods and along streams. It is noted for its fragrant white flowers, attractive glossy green foliage, and fall color. Black Cherry is one of the few plants that can compete with oaks as far as insect use and wildlife benefits. This native cherry may also be called Wild Cherry or Wild Rum Cherry.

Black Cherry is known for its fragrant flowers which make their appearance in May. Small, 5-petaled white flowers appear in masses on 3-6 inch long pendulous racemes. Its respectable mature stature and fragrant blooms make it a worthy ornamental or shade tree that is sure to fill your landscape with a lovely aroma in spring. When fall arrives, its glossy green foliage shifts into a lovely display of colors from yellow to red.

Black Cherry isn’t just appealing to your eyes and nose, but the wildlife too! This plant provides nectar for a plethora of pollinators and is a larval host plant for several species of butterflies. Because of its benefit to wildlife, this tree fits well in any native restoration site or natural area.

There is a significant amount of genetic diversity in Black Cherry due to its wide range. Trees in Wisconsin, for example, are noted for their larger than average seed weights compared to those found in other states. These differences are why it’s imperative that your plants are a local ecotype. Southern plants will break dormancy earlier and experience more winter damage than Wisconsin Black Cherries. Planting northern plants in more southern locales is also undesirable as they will exhibit slower growth than locally adapted trees.

Before we dive into the benefits to wildlife, first it should be known that the leaves, twigs, bark, and seeds are poisonous to livestock and household pets like cats or dogs. These parts of the tree contain a cyanogenic glycoside which releases hydrogen cyanide when chewed or digested. It has been observed that most livestock poisoning comes from the consumption of wilted leaves, which contain more of the toxin than fresh leaves. White-tailed deer and rabbits, however, browse seedlings and saplings without harm. Both of these animals may browse Black Cherry seedlings heavily. In some areas, this can lead to a diminished population of the tree species.

The fruits are an important food source for several species of passerine birds such as the loggerhead shrike, black-billed magpie, black-capped chickadee, tufted titmouse, and Cedar Waxwing. Game birds, like grouse, turkey, and quail, as well as many mammals such as the red fox, raccoon, black bear, squirrel, and rabbits, are also frequent consumers of the fruit.

Good seed crops are produced on individual trees every 1 to 5 years but stands with multiple trees tend to have consistent annual production. In Wisconsin, the fruit ripens near the end of August, and between September/early October.

In addition to its blooms drawing in pollinators from far and wide, Black Cherry is a larval host plant for many species of butterflies. You may see coral hairstreak, tiger swallowtail, spring azure, and numerous species of viceroy relying on Black Cherry.

Black Cherry has an extensive native range; it is found throughout much of eastern North America. It grows well on a wide variety of soil texture and moisture conditions except for the very wet or very dry. Black Cherry should be grown in full sun as it is a shade-intolerant species that is found primarily as successional vegetation or in forest openings. You may also find this species growing naturally in old fields or along fencerows. Black cherries are found most often as scattered individuals in various types of mesic woods and second-growth hardwood forests. Because of long-distance seed dispersal by birds and mammals, seedlings are often abundant in sites with no or few reproductive black cherries.

Black Cherry is usually a tap-rooted species which historically makes them difficult to transplant. We grow our black cherries in containers – and with our light mix, they develop nice fibrous root systems – which transplant readily.

This species requires little pruning to develop a strong structure. Remove damaged or diseased branches as needed. We invite you to check out the Arborist For Hire lookup at the Wisconsin Arborist Association website to find an ISA Certified Arborist near you.

Black Knot is a fungal disease that all who grow plants belonging to the genus Prunus should be aware of. The fungus Apiospornia morbosa is also commonly, yet less formally known as the “poop on a stick fungus.” Black Knot primarily affects plum and cherry trees, although it can also infect other stone fruit, such as apricots and peaches. The disease causes serious damage to the branches, twigs, and fruit. This disease is easy to diagnose because of the distinctive worty-looking black galls that completely encircle the stem. The infected areas of the tree will produce excess wood tissue that becomes swelled and light brown in color. These swellings, or galls, will continue to increase in size and will eventually rupture, releasing its spores into the air which further the spread. Black Knot spreads in spring. Smaller twigs may die within a year of infection, while larger branches can last for several years before the disease eventually kills them. The tree will slowly weaken and eventually die if left untreated.

Black Knot is a disease that is just a part of life when it comes to the genus Prunus. If there is a specimen you wish to protect, the first step in treatment is to cut away branches and stems that are infected. If possible, do this in winter while the tree is dormant. The fungus may extend further inside the tree than what is visible on the outside. Cut 2-4” below the gall to make sure you are cutting back to disease-free tissue. We recommend burning the diseased branches to prevent further spread.

After the diseased parts are removed, if you wish to continue treatment, the second stage is to apply a fungicide. We recommend contacting an ISA Certified Arborist near you to assist you with the pesticide application and product selection.

Other pest and disease issues you may encounter include leaf spot, powdery mildew, scale, tent caterpillars, and fireblight.

Members of the Prunus genus can be found in every state and almost every county of the United States, and Black Cherry is no slouch. Prunus serotina var. serotina, the Eastern Black Cherry, is abundant throughout the eastern US; from the Florida panhandle to northern Maine; as far west as eastern North Dakota; and as far southwest as eastern Texas. It is found in every county of Wisconsin. There are also four other recognized varieties in the US although I’ve read conflicting names and ranges for each.

The wood of Black Cherry is a rich reddish-brown color and is strong, hard, and close-grained – it’s one of the most valued woods for cabinets and furniture in North America. It’s also used for paneling, interior trim, gun stocks, handles, crafts, and scientific instruments. The highest value use is in veneer production, which involves shaving ultra-thin sheets of wood off the main trunk and applying them to low-quality wood products like plywood, OSB, or fiberboard.

The fruit has been used to flavor rum and brandy (“Cherry bounce”). Pitted fruits are often enjoyed raw or used in wine and jelly.

The oldest and tallest Black Cherry in North America is located at the Cook Forest State Park in Cooksburg, Pennsylvania. It’s an astounding 139-feet tall, with a spread of 76-feet. The estimated year of planting/germination was 1730. This old-timer is older than the United States itself!

If planting in a landscape, Black Cherry pairs well with other wildlife magnets such as Buttonbush, Butterflyweed, Coneflowers, Dogwoods, Serviceberries, and Bee Balm.