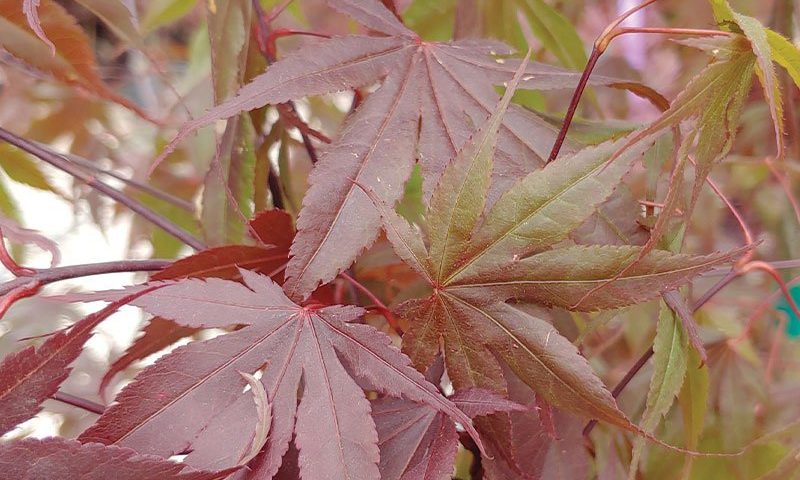 The ‘Bloodgood’ Japanese Maple is one of the most popular Japanese Maple cultivars, particularly in the northern United States. The tree acts as a beautiful ornamental or accent tree for a yard looking for an eye-catching pop of color. Although this variety of Japanese Maple is a common sight in many yards in and around the Milwaukee area, it’s still quite susceptible to harsh winter wind. It’s recommended you plant them somewhere sheltered.

The Bloodgood Japanese Maple is typically used as an accent tree in yards in need of color diversity. Because their leaves keep their maroon color until fall, they are a great choice for someone looking for a splash of red to contrast with the green of the rest of their yard. They can also be used as a shade tree once they reach their full height and spread.

Because ‘Bloodgood’ Maples are not native and produce no desirable fruit for local wildlife, the maple does not have any significant value for the local critters. Insects may feed off of the foliage of the tree, though this is more opportunistic feeding rather than something necessary for the native ecosystem.

Japanese Maples prefer consistently moist soil, so it’s a good idea to place mulch around the base of the tree in order to prevent evaporation and keep the roots cool on hot days. Pruning isn’t required to keep the plant healthy.

‘Bloodgood’ is typically an ornamental tree left to grow wild. If you intend to shape the tree for specific aesthetic purposes, like a bonsai, this is best done in late fall to mid-winter.

The most challenging part of owning a ‘Bloodgood’ is the struggle of keeping them through the winters. Acer palmatum is naturally found in warmer climates where winter isn’t as harsh as in the Midwest, so they tend to have trouble surviving. To best keep ‘Bloodgood’ Maples during the winter, it’s important to plant them somewhere that shelters them from harsh winter winds like up against a side of the house.

In the Milwaukee area, we recommend planting your Bloodgood on the Southeast side of your house to shelter it from the Northern winds. Additionally, due to Lake Michigan’s effect on our local climate, ‘Bloodgood’ Maples do best closer to the lake where it’s warmer in the winter.

Since ‘Bloodgood’ and other Japanese Maples are marginally hardy in our area, we don’t warranty them here at Johnson’s.

While this tree doesn’t have any serious pests or diseases directly associated with it, it can suffer from illnesses like Stem Canker, Leaf Spots, Botrytis, Anthracnose, and root rot. It can contract Verticillium Wilt, which is incurable and can quickly lead to death. Additionally, aphids, borers, and mites could also be a problem as they can with most other trees. Because Japanese Maples prefer slightly acidic soil, Chlorosis may occur if its site has too high a pH level. If the ‘Bloodgood’ is left in a full sun area and allowed to dry out, foliage scorch can occur.

Japanese Maples are a highly coveted landscape plant for many good reasons. However, since they are marginally hardy, they require special consideration. In this article, we discuss history, sunlight, Wisconsin’s winter winds, common issues, and alternatives. Learn more about Growing Japanese Maples in Wisconsin.

If you’re looking for some plants that match the look of the ‘Bloodgood’, various Astilbe work well as they prefer shade. The Chocolate Shogun Astilbe looks particularly beautiful with its dark leaves and cream-colored flowers and the Visions of Pink Astilbe provides a nice pop of color underneath the maple. Hostas, another shade-loving perennial, are also a great choice. Empress Wu Hostas grow large, impressive, blue-green leaves that would contrast well under the ‘Bloodgood’. If you want some simple groundcover, Green Carpet Pachysandra is a fine choice.