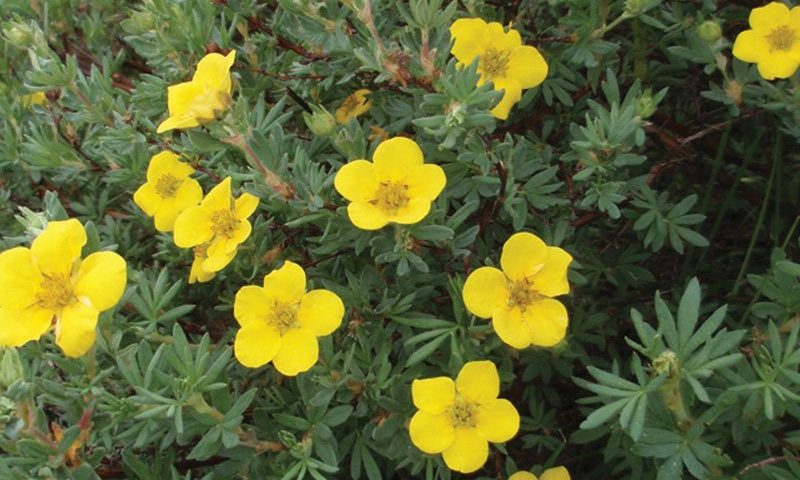 Bush Cinquefoil is found from Asia to Europe to North America. This is a cold-hardy, low-maintenance shrub. The sweet little yellow flowers are plentiful and showy with a long bloom time. It prefers moist, well-drained, sandy soil but can handle many conditions, from wet to dry, and sand to clay. In the eastern US and Canada, this native Potentilla is commonly found in riparian zones, meadows, marshes, forest edges, and prairies. Although it prefers well-drained soils it is also associated with fens and peat bogs in other parts of the world. This is to say, this is one adaptable shrub.

May also be known as Potentilla, Golden Hard-hack, Shrubby Cinquefoil.

Potentilla can be planted along a border or walkway. It can also be used as a low hedge and is an appropriate size for a foundation planting that would add plenty of interest while in bloom.

Plant in a pollinator garden, butterfly garden, or edible garden to attract pollinators.

Plant for erosion control on a slope or bank. Low maintenance requirements and its tolerance of many soil types and moisture levels make it a nice option for an area where aftercare would be difficult.

This native Potentilla is very low maintenance. Prune canes in late winter, this will keep the plant looking its best as canes will start to look their age over time. It can also simply be cut to the ground.

Bush Cinquefoil may get mildew in humid, hot summer. Also look out for fungal leaf spots and spider mites. Overall, none of them are a big issue, as the plant is hardy and can be cut down for a fresh start in winter.

Name: Common name Cinquefoil is broken down into ‘cinque’ meaning “5” for its 5-petaled flowers and 5-lobed leaves. ‘Foil’ means “leaf.”

Historical Uses: Leaves are used to make tea and have an astringent effect. Flaky bark can be used as tinder to start fire. Stands of pure Potentilla are rather flammable, especially if surrounded by grasses. This could be a concern in the western United States.

Bush Cinquefoil is found in Wisconsin amongst Bog Birch, Big Bluestem, Little Bluestem, and Prairie Dropseed. Also plant along with sedges that like full sun such as Fox Sedge, Long-beaked Sedge, and Pennsylvania Sedge. Due to its ability to be tolerant of many conditions there are many options that would go fine with Bush Cinquefoil.