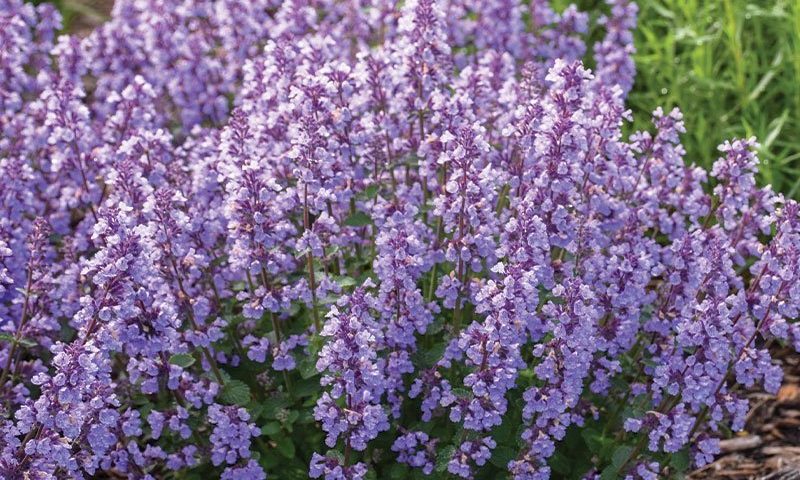 Cat’s Pajamas Catmint is unlike other Catmint varieties. While others only produce flowers at the top of the stems, ‘Cat’s Pajamas’ blooms all along the stem – from the base to the tips. It’s also significantly more compact and begins blooming much earlier than other Nepeta, providing a cushion of blue in the garden as early as May. Critter-resistant, drought tolerant, and long blooming, it truly is the “Cat’s Pajamas”.

Being smaller and more compact than most other Nepetas, ‘Cats Pajamas’ is especially well-suited to placement in the front of the border. It’s small enough and drought tolerant enough to a great addition to the Rock Garden.

Bees and other beneficial insects heavily visit all Nepetas. Their long bloom season makes them particularly valuable as a food source for pollinators.

Nepeta ‘Cat’s Pajamas’ is a low maintenance perennial. It’s pest free, not browsed by animals, and is tolerant of drought and poor soil.

As with many Nepetas, it can benefit from a mid-summer shearing to rejuvenate its growth and encourage more profuse re-blooming. This is accomplished by cutting the stems down to several inches if/when the habit becomes unruly or the flowering seems to have declined. Within a couple of weeks the plant will regrow to form a fresh crop of leaves and flowers. This mid-season pruning is not necessary but may be beneficial to keep the plant looking its best.

‘Cat’s Pajamas’ Nepeta is not subject to any major insect or disease issues.

The mint scented foliage and flowers make it unpalatable to most browsing wildlife, including deer and rabbits.

It is, however, appealing to cats who may damage the shape of the plant by rolling around on it.

It begins blooming very early in the spring and continues throughout most of the summer. It can be effectively paired with many different perennials. Its early blue flowers pair nicely with the pinks or whites of Dianthus. Its mounding form contrasts well with the more vertical form of summer blooming Ornamental Onions and dwarf daylilies. Try combining it with Stachys ‘Pink Cotton Candy’, Perennial Geraniums, Coreopsis and smaller ornamental grasses.