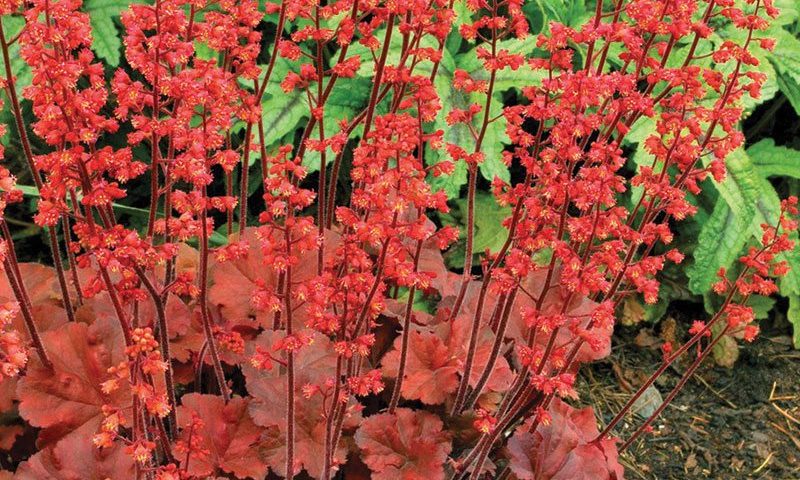 This hybrid Coralbells selection has both colorful foliage as well as a showy display of blooms. Cherry Cola Coralbells form a compact mound of lovely red-brown tone foliage with taller stems of cherry-red flowers appearing in late spring and early summer. Unlike most Heuchera cultivars, this one prefers full sun to part shade.

The versatility of Cherry Cola Coralbells means the possibilities are endless! Use as a border, or mass in the garden where some added color is desired. Coralbells do well in the dry shade often found beneath trees, making them well suited for underplanting.

While not a key species for wildlife in Wisconsin, Cherry Cola Coralbells provide value as a nectar source. The petite flowers will attract hummingbirds, butterflies, and other pollinators.

In general, Coralbells are tough plants with few problems. While tolerant of alkaline soils, Cherry Cola Coralbells can experience rot with poor drainage. Amending soil with compost when planting will mitigate this issue.

In full sun, the leaves can scorch if there is not enough soil moisture. Conversely, Cherry Cola Coralbells can get crown rot in shade with too much moisture. Divide in spring when center has become woody (typically every 3-4 years).

Cherry Cola Coralbells can frost heave in Wisconsin winters if improperly planted or not adequately protected. When planting, amend soil with compost and plant even with the surrounding soil. Applying a fall mulch of 3-4” will prevent frost heaving. If frost heaving is noticed, push the crown back into the soil to protect the roots.

Spent flower stalks can be removed when Cherry Cola Coralbells has stopped blooming. This may encourage a second bloom. The leaves are semi evergreen and may hold their color if winter is not too severe, or if adequately protected with mulch and snow cover. Damaged and withered leaves should be cleaned up in spring.

Cherry Cola Coralbells has no major insect and disease issues but can be subject to frost heaving in winter. Occasionally you may find powdery mildew, rust, and bacterial leaf spot. The plants can also be damaged by weevils and nematodes. These diseases, however, are not major and best avoided by maintaining good plant vigor and siting Cherry Cola Coralbells properly.

For the most part, Cherry Cola Coralbells are deer and rabbit resistant due to their fuzzy stems and leaves.

Cherry Cola Coralbells are a 2010 introduction in the Soda™ series from Terra Nova Nurseries.

The Heuchera genus includes over 30 recognized species, all native to much of North America. They are found on a wide variety of sites, from rocky outcroppings to wooded meadows, with a variety of different growth habits. Although useful for many landscape applications, Coralbells were not widely used until the 1980s. Today, there are a plethora of cultivars available with different foliage colors, flowers, and growth forms. At Johnson’s Nursery, we try to limit our inventory to those varieties we know are successful for our Southeastern Wisconsin soils and climate.

Coralbells are also known as Alumroot, a name derived from their medicinal properties as a pain reliever and anti-inflammatory. The genus name Heuchera is a reference to the German botanist and physician Johann Heinrich von Heucher.

The compact habit and mounded form of Cherry Cola Coralbells makes it a versatile plant for any space needing an extra splash of color, even those with more sun than typical for a Heuchera variety. In sun, combine with Caradonna Salvia for a purple contrast in spring, or consider using Little Goldstar Black Eyed Susan for a midsummer yellow. In shade, mix with Rozanne Geranium, Brunette Snakeroot, or Hot Lips Turtlehead for contrasting color and foliage.