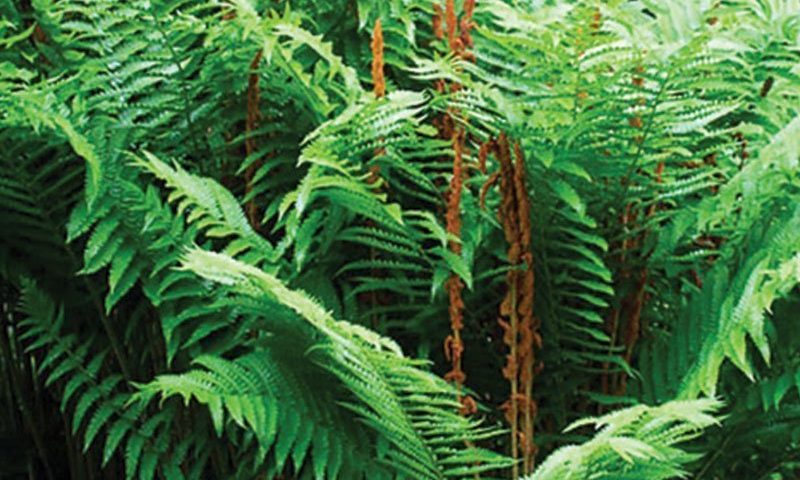 Regarded as a living fossil, Cinnamon Fern makes a great border in a shady spot, like on the north side of a foundation. The light-colored leaves contrast beautifully with the cinnamon-colored stalks of the fertile spikes and the shade of the environment. As a low-maintenance plant, it’s is a viable option for moist shady sites, that encourages our native populations.

Cinnamon Fern is an exciting plant to watch. As Spring arrives, the fern unfurls in large light-colored fronds, making way for the fertile fronds to take center stage. The contrast of the dark-color spikes and the light-color leaves is truly spectacular in the landscape. Cinnamon Fern needs an adequate amount of water, so a shady site where the soil doesn’t dry out as much is best. Dappled sunlight can be tolerated, however if excessive, the fronds may begin to brown, and the water uptake will increase substantially.

A good site, for example, is under pine trees. The acidity from the needles and the shade from the canopy creates a nice environment for the fern to thrive. This example can also be used under any canopy or shady region with useful organic matter from the trees above. The fall display of a mass of Cinnamon Ferns is spectacular, this plant truly gives season long interest. Unlike many other ferns, Cinnamon Fern doesn’t have a network of shallow rhizomes. Instead, there is a mass of fibrous roots. Rhizomes may be produced for reproduction needs, but this is not the main source of nutrient uptake or stabilization, which makes thinning and transplanting easier.

The large fronds make a mass that creates a protected environment for small mammals, lizards and frogs. Birds are a big fan of Cinnamon Fern, they enjoy frequenting the spores during winter. Additionally, new fronds produce a fuzz that native species may use for nesting material.

Cinnamon Fern doesn’t require much maintenance. The most important factor is the water supply. In shaded areas, the fern needs to be kept moist but not wet. For sunnier locations, it is critical to keep the soil moist. Cinnamon Fern can be thinned out by separating the clumps and transplanting in spring.

Cinnamon Fern has few pest or disease problems. It can be susceptible to the Osmunda Borer Moth, the sporangia-feeding plant bug or Osmunda thrips. These insects are generally not detrimental to the health of the plant. Thinning the plant out the next season helps avoid the problem.

Cinnamon Fern is a part of the Osmundaceae family, otherwise referred to as the Royal Fern Family. These ferns are among the oldest known ferns.

The fiberous roots of the crown is called ‘osmunda fiber’ and is frequently used as a potting media for orchids and other epiphytes.