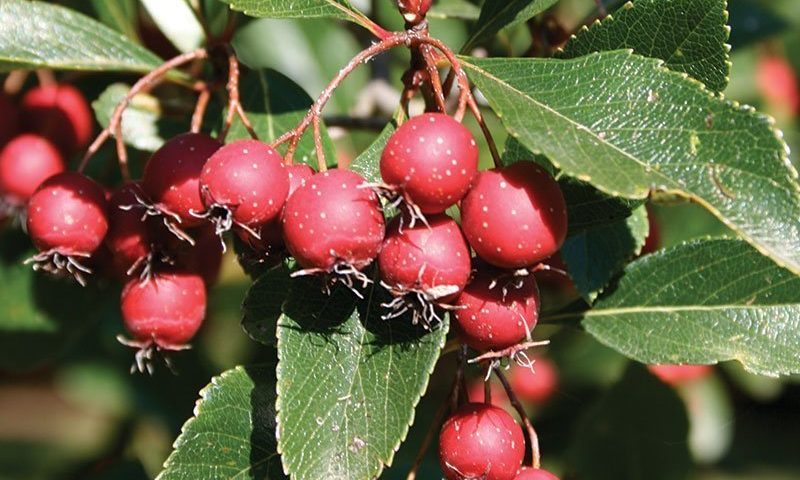 Cockspur Hawthorn is a deciduous tree that features a stunning, umbrella-shaped growth habit, spring flowers, fall fruit, and brilliant orange fall color. It’s incredibly versatile in most landscape styles. This tree has large sharp thorns. It’s best to avoid planting in areas where children are likely to be playing, as its sharp thorns can cause injury. A thornless variety, Crataegus crus-galli var. inermis, is available for situations where thorns are not acceptable.

You may notice some of the same images used on both profiles. This is because the rest of the characteristics, except the thorns, are identical.

This is a broad-rounded tree with exfoliating bark and branches armed with large thorns (1.5 to 4-inches long). Its strong, horizontal branches make it an amazing accent tree. It’s also an ideal choice for a native garden or natural landscape. This tree’s lower branches often sweep near the ground which can give it the appearance of a large, flat-topped shrub.

It tolerates challenging growing conditions which makes it a useful choice as a focal point in your landscape or as an attractive specimen tree. It has also been used for hedging and privacy borders. It’s best to avoid planting in heavily trafficked areas like playgrounds or walkways where people may come into contact with the thorns.

The flowers of the Cockspur Hawthorn are an important source of nectar for pollinators.

The dense horizontal structure also makes an excellent nesting spot for birds like the Brown Thrasher and Yellow-Breasted Chat.

Flowers are followed by rounded fruits that ripen to a deep red in the fall. These berries are a valuable food source for birds. Hawthorns can attract more than 20 different species of birds and are especially favored by the Cedar Waxwing, Ruffed Grouse, and Fox Sparrow.

Cockspur Hawthorn care starts with proper siting. This tree can tolerate part shade, but it performs best in full sun. This tree has proven to be adaptable to different soil types and is indifferent to soil pH levels. It can tolerate drought and some occasional seasonal flooding and different soil textures such as clay or sand. It’s also tolerant of urban pollution, but because of its thorns, the native species isn’t urban approved. However, the Thornless Cockspur Hawthorn, Crataegus crusgalli var. inermis, is urban approved.

This tree can be pruned easily to maintain its umbrella-like form. It can be cut back to old wood and will resprout freely. Pruning is best done in the dormant season.

We invite you to check out the Arborist for Hire lookup at the Wisconsin Arborist Association website to find an ISA Certified Arborist near you.

Cockspur Hawthorn is susceptible to Cedar-Hawthorn Rust. This is a fungal disease that causes discoloration of the leaves, fruit, and new branches. It starts on Eastern Red Cedar and Junipers then spreads to apple, crabapple, serviceberry, and hawthorns. The fungus must “move” from one type of host to another. This disease only affects the appearance of the tree and will not impact the tree’s health. You can protect trees from infection by spraying in spring and early summer with an approved fungicide. Products containing chlorothalonil and mancozeb are registered for use against cedar rust disease on hawthorns. This tree is also susceptible to other common ornamental diseases such as leaf spot, powdery mildew, cankers, and leaf blight.

Cedar-Hawthorn Rust is essentially the cousin of Cedar-Apple Rust. Both hawthorns and apples get infected by the fungal disease when near a Cedar/juniper tree, but technically the disease is not the same. They’re in the same family, but not the exact same.

The genus for this tree, Crataegus, comes from the Greek word Kratos meaning “strength” for its strong, hardwood. The specific epithet crus-galli in Latin means “leg of a rooster”. This is in reference to the purported resemblance of the thorns of these plants to a cock’s spurs giving it the common name Cockspur Hawthorn.

The Loggerhead Shrike and the Cockspur Hawthorn have a gruesome relationship. This bird may look as harmless as a mockingbird, but its behavior is closer to that of a raptor rather than a songbird. Another common name for the Shrike is the butcherbird. This nine-inch carnivore hunts a wide variety of prey like grasshoppers, beetles, lizards, frogs, and smaller birds. Because it doesn’t have large enough talons to hold the prey like larger raptors, it takes advantage of the large thorns of the Cockspur Hawthorn, the shrike will catch its prey and then impale them onto the thorns to make consumption easier.

Cockspur Hawthorn can be planted as a small tree in the landscape. It pairs well with other fruiting trees such as Crabapples and Serviceberry. Hawthorns can be pruned into an informal hedge to block views/sounds, or provide protection from wildlife. Other plants that pair well with informal hedges/screens include Quaking Aspen, Ninebark, or Gray Dogwood. We recommend planting intermittently alongside hawthorns to give your hedge a more natural look.