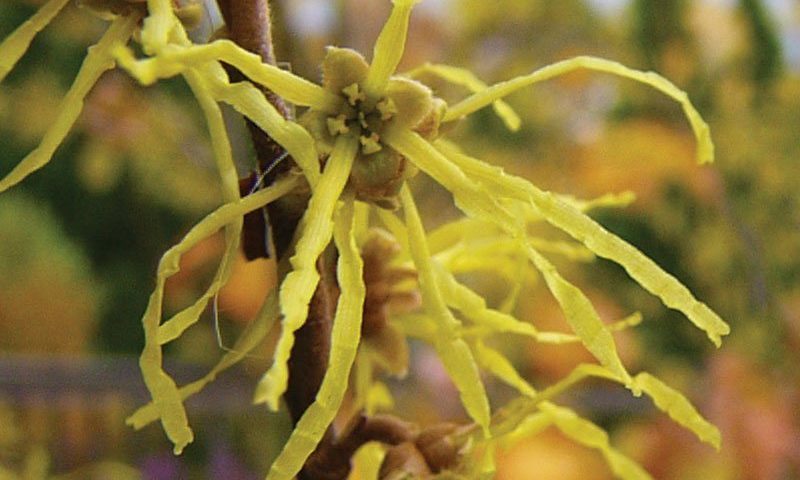 A fall blooming large scale shrub, with native habitat and wildlife value, Common Witchhazel brings year round interest to wooded areas. Fragrant, four (4) crinkly petaled, ribbon-like flowers draw in your interest towards the end of fall. Its unique crooked branched crown is a great addition to a hedge or naturalized border. Common Witchhazel’s tolerance to poor site conditions, salt, and air pollution make it a great choice for urban environments near roadways, parking lots or parks. May also be known as “Witch hazel”.

Commonly found in wooded areas, siting Witchhazel is easy if you have the space. This versatile shrub is extremely salt tolerant; therefore, its large mature size makes it a great choice along roadways or driveways as a hedge or screen. A spectacular display of fall flowers and color gives this shrub specimen qualities in a garden bed. In shady sites, it will have a more open structure making it a great for native restoration areas. And with full sun, Common Witchhazel provides unique branching and symmetrical architectural beauty. Additionally, it is tolerant of Black Walnut Toxicity and has been observed to be Deer Resistant, making this truly an excellent Wisconsin native shrub for any naturalized setting.

The fruit and seeds produced by Common Witchhazel attract a variety of birds, including wild turkeys. Witchhazel serves as a host plant for the larvae of the Spring Azure Butterfly (celastrina ladon).

A great choice for naturally wooded areas, pruning should only be used when necessary to maintain shape, which may be performed once annually or less in early spring. Otherwise, care after the plant is established is minimal with its high tolerance to many site conditions and outside factors. Common Witchhazel will grow well in full sun to full shade, it prefers moist organically rich soils and will tolerate heavy clay. Remove suckers to prevent colonial spreading of this shrub.

Early fall foliage as the dense green begins to show signs of yellow.

Flowers begin to emerge as the foliage fades.

Closeup on fall flowers on Witchhazel.

Unique branching on a mature Witchhazel.

Common WitchHazel has no significant disease or pest issues. It may occasionally develop galls on its foliage, which host female aphids, particularly when planted near birch trees. Galls rarely cause harm to the plant, and they may even stimulate the plant to produce excess tannins (protection against insects that may eat it).

Aside from its spectacular fall display of flowers, Common Witchhazel has a hidden talent. When the seed pods are ready, typically one (1) year after flowering, they will burst open and shoot seeds up to 12 feet away. This in turn, leads to another common name for the plant – snapping hazel. There are some cool compilation videos online of the seeds shooting themselves out, like, nature’s bullet if you will.

Early European settlers were taught by the Mohegan tribe of Connecticut to use Common Witch Hazel twigs for water dowsing. This practice was typically done with Hazel (Corylus[italics]) twigs in Europe, likely giving Witch Hazel part of its common name. Witchhazel’s bendable habit gives it its name, wiche in Old English meaning “pliable”. Read The Mysterious Past and Present of Witch Hazel to learn more.

Combined with water and alcohol to release tannins, the bark of Witchhazel is most commonly known as an astringent used to treat sores, bruises or other skin related ailments. The plant does not produce these tannins by accident, but as a form of protection against herbivores and to prevent the growth of fungi and bacteria that could damage the health of the plant.

Commonly found in the under story of our woodlands, combining Common Witchhazel with other native trees and shrubs for screening creates a natural look, while providing a border. Use small trees like Pagoda Dogwood, J.N. Strain Musclewood, and Chokecherry and shrubs such as Gray Dogwood, Glossy Black Chokeberry, and Common Ninebark.