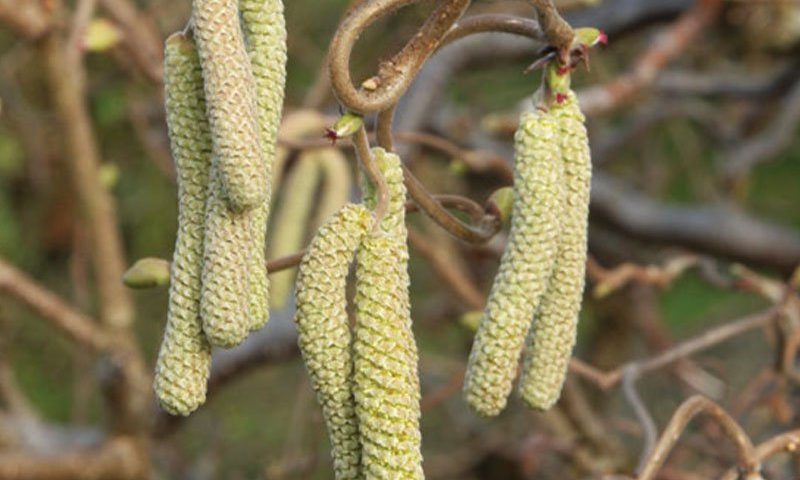 Twisted knotty trunks of Contorted Filbert make a unique ornamental statement in the landscape. Commonly referred to as Harry Lauder’s walking stick, this deciduous shrub provides winter interest with its gray gnarly (but in a good way) branch structure and dangling catkins. The small stature and shade tolerance allow for placement where other ornamental shrubs or trees may not thrive.

Adaptable to less rich soil types, Contorted Filbert prefers rich, moist and well-drained soil. Performs best in full sun to partial shade, it can be used as a hedging/mixed screen. It draws all-season interest when utilized as a specimen planting in the landscape. Compatible with a wide range of companion plants it’s an exciting feature for an ornamental landscape bed. Place near walkways, in front of homes, near patios and in ornamental gardens.

May also be grown in patio containers. Cut and dried stems are often seen in flower arrangements.

Although this species cultivars and hybrids are more often produced and grown for consumption (hazelnut) Contorted Filbert does not produce fruit (nuts). For a similar plant with less ornamental interest and more wildlife value, try native American Filbert.

Allow it to grow naturally and take a curvy form shape. Prune out some branches to allow the interesting ones to show off. Because the majority of Contorted Filberts on the market are grafted onto a different rootstock, suckers can be an ongoing issue. Prune out any suckers that arise and do not resembled the twisty stems true to the grafted species.

Corylus avellana ‘Contorta’ is known to have good resistance to filbert blight. Rarely occurring diseases include black knot, crown gall, and leaf spot. Scale may also occur. In years when Japanese beetles are bad, they may attack the foliage.

This selection was found in a southeastern English community, Frocester in roughly 1863 growing in a hedgerow. Sited by Victorian gardener Canon Ellacombe, it was eventually given the common name Harry Lauder’s walking stick. Harry Lauder at the time a very well-known singer and comedian, acknowledged for becoming the first performer to sell over a million records. Part of his stage performance included a bit where we wore a kilt (he was Scottish) and used a twisted and severely distorted walking stick. Thus, we have, Corylus avellane.