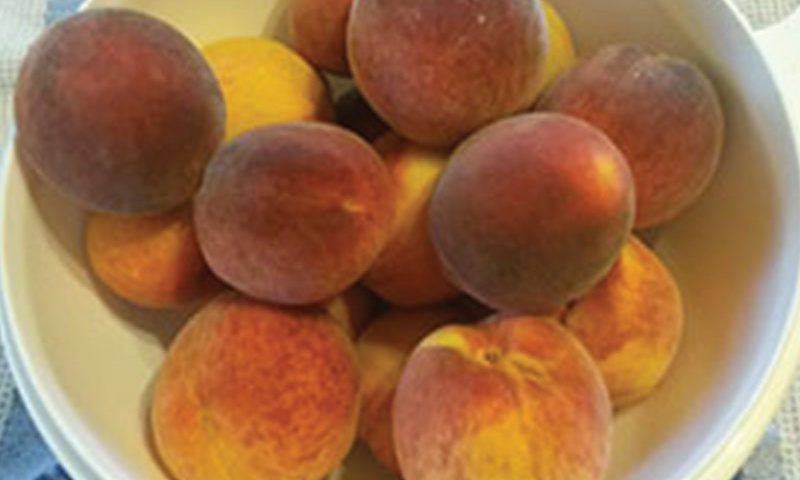 Growing peaches in S.E. Wisconsin is not a foolproof task. Due to our cold winters, success is limited by the cold temperatures and peach pests. Best results are obtained by planting very cold-hardy varieties, such as Reliance Peach, Contender, and Veteran.

Peach tree flower buds are only winter hardy to about zero degrees Fahrenheit. When we get colder than zero degrees, we start losing flower buds. Because of this, peaches sited where a microclimate exists will increase the changes of getting a peach crop. These sites include protected sites such as a courtyard or S.E. side of building. The closer you are to Lake Michigan the more protection you have (due to the lake effect). The further west you are, the less protection is afforded.

Despite these issues, the thrill of producing a crop of chin-dripping, tree ripened peaches is very rewarding. Nothing beats the taste of tree-ripened peaches!

“As far as peach pests, insect and disease problems are concerned, I find that growing peaches in S.E. WI is much easier than other fruit crops.”

Compared to apples, there are very few peach pests that might hinder production of a quality fruit crop.

In the 17 years that I have been growing peaches in Wisconsin, the only major peach pests (insect) I have encountered is Plum Curculio. The only major fungal issue I have found is Peach Leaf Curl. Yes, there are other peach pests (insects and diseases), but so far they have not been major issues on my peach crops. With only two peach pests to worry about, and only a few sprays needed for control, peaches are a relatively easy crop to grow provided you have a protected site for planting.

Peach Leaf Curl is caused by the fungus Taphrina deformans. This fungus overwinters on the bark and buds of the tree. In early spring when the leaf buds swell and the bud scales crack, this fungus gets into the meristem. Once in the meristem, it causes the leaves to be deformed as they develop. The leaves emerge very twisted and usually are puckered up with red or yellow blotches on each leaf. This issue is primarily cosmetic since it only affects the leaves. The issue will resolve itself by mid-summer as the summer heat renders the fungus ineffective and normal sized leaves will then appear on all new growth. The diseased leaves will usually drop off in July.

Although a cosmetic issue, severe outbreaks can weaken the tree over time. If enough leaves are infected in spring, those areas of the tree usually produce only very small peaches of low quality.

The disease cannot be eradicated by spraying a fungicide after the leaves are infected. Control is obtained only by spraying a preventative fungicide spray
BEFORE THE BUD SCALES BREAK.

I normally spray one application of a fungicide containing the active ingredient chlorothalonil, sometime between March 15th and April 5th. I say normally, since this timeframe works most winters for our area. In 2016, it was actually so warm in March that I sprayed early that month just to be sure I got it down before the bud scales cracked. Chlorothalonil is found in several fungicides produced by Ortho, Bonide, and Fertilome brands. A liquid copper spray will work too. The key to success is to coat the entire tree with the fungicide while it is still dormant, and before the buds swell. Peaches bud out early, so best to spray as early as weather conditions permit during this timeframe to get good prevention. Some years when I spray, I have to dodge the last of the snow piles on the ground as I walk around the trees.

The major insect pest on peaches is Plum Curculio. Plum curculios are a native snout weevil. They attack plum, peach, pear, apple and other fruits. On peaches, the female curculio will attack the fruit, when it is the size of an olive (usually June), leaving a noticeable crescent-shaped wound on the young fruit. Into the wound, the female curculio will deposit an egg. The egg will hatch and the larvae will tunnel into the center of the fruit. Infected fruits usually color up early and abort from the tree. To control, spray an insecticide during the first few weeks of June. Normally, curculio season runs from late-May to mid-late June in S.E. Wisconsin. 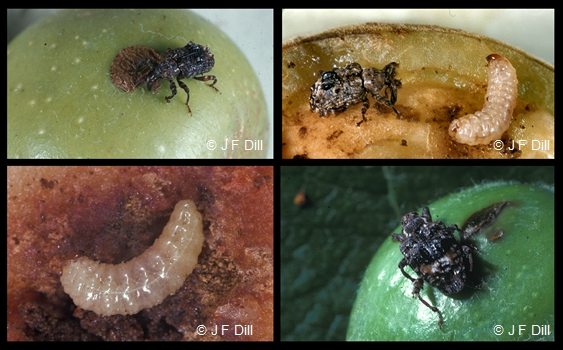 The nice thing about this crop is that I am done spraying for pests by July and usually only 2-3 sprays were needed to get excellent looking fruit! Once we reach late June/early July, I usually have no other major problems to worry about on peaches.

Should you not wish to spray, you can skip it for control of plum curculio and still get some decent fruit. I say this because peaches bear so many fruits, that I never found the curculio to be able to damage all of them. Spraying however, will get you a much bigger crop. So if you have a peach tree and want to get the most out of it, mark your calendar for these important spray times and have a peachy year!