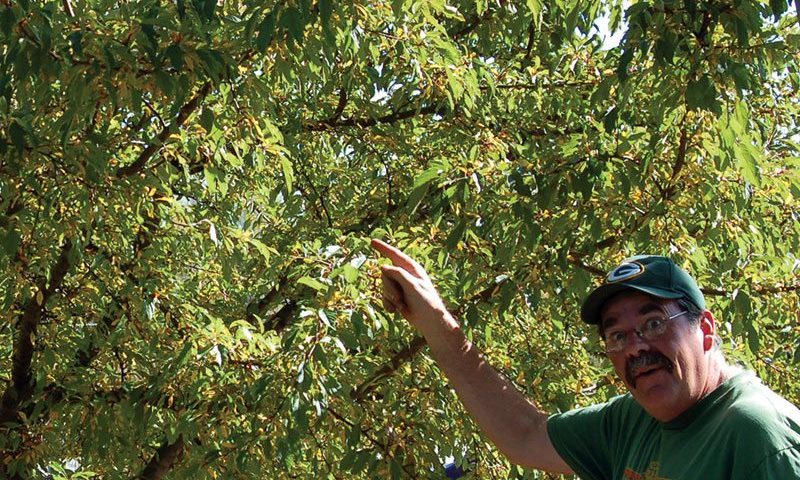 I’m sure there are some of you out there that are thinking, “Yeah crabapples are for the birds, and not for me. They have disease problems (scab) that knock the leaves off the trees by August and the big, stinking fruit that drops all over the sidewalk that causes me to have to go out and rake them instead of watching the Packer game.”

Well, all I can say to people like you is this– go get a beer, put on your 2011 Super Bowl champion T-shirt, and finish reading this article!!!

Left: Robin in crabapple tree | Right: The fruit of Golden Raindrops® is squishable, perfect for birds to enjoy.

I ain’t talking about crappy crabapples here! I’m talking about trees without those problems. Ones that are truly for the birds to feed on. Ones that all of us can commune with in a natural, “kumbaya” sort of way. These are the trees that bring us together. Cedar Waxwings, robins, cardinals, and an occasional squirrel, are all attracted to these trees. It’s a wonderful thing to be able to watch them come alive with beautiful natural birds pecking away at the tiny fruits. You see, many ornamental crabapples on the market today have little fruits that soften at various times throughout the season from fall through early spring. If a person wants, he or she can plant a mixture of various cultivars to feed the birds all through our leafless seasons.

Crabapples for birds are often determined by the size and the hardness of the fruit. The various cultivars typically become soft after a series of frosts in the fall and winter. Some become soft rather quickly. Malus baccata ‘Jacki’, Malus ‘Cinderella’, Malus ‘Louisa’, Malus sargentii, Malus sargentii ‘Tina’, and Malus ‘Golden Raindrops’ are examples of trees that are eaten first by the birds in mid to late autumn.

Golden Raindrops® Crabapple has abundant clusters of tiny, golden-yellow fruits that are eaten by birds in fall.

The cultivars whose fruit softens in late winter often provide a little pick me up for the birds. I guess you could call it a little extra toot for the snoot. The fruits will have a bit of alcohol in them. It’s fun to watch! Two of these cultivars are ‘Bob White’ and ‘Sentinel’.

Two cultivars that I know of have fruits that soften very unevenly. These are ‘Birdland’ and ‘Ormiston Roy’. They feed the birds from mid-autumn all the way into spring. I would say they are the ultimate in crabapples for birds.

A common misconception in the trade that yours truly had fallen prey to earlier in his career is that all small-fruited crabapples are taken by the birds. This is not true. Malus ‘Donald Wyman’, Malus ‘Red Jewel’, Firebird® Crabapple, and ‘Adams’ Crabapple are cultivars that retain their fruit all through winter. The birds mostly leave them alone. The little crabapples drop from the trees before flowering in spring. These are still among the finest ornamental crabapple trees for fruit color persistence in the winter. It’s just that they are not good plants for attracting birds or for siting in areas where fruit drop is not acceptable (by walkways or patios).

The list I have compiled is by no means comprehensive, but is a start in helping you plan ornamental crabapples for birds.

Some of these crabapples are no longer available, please check our Public Inventory prior to inquiring about availability.