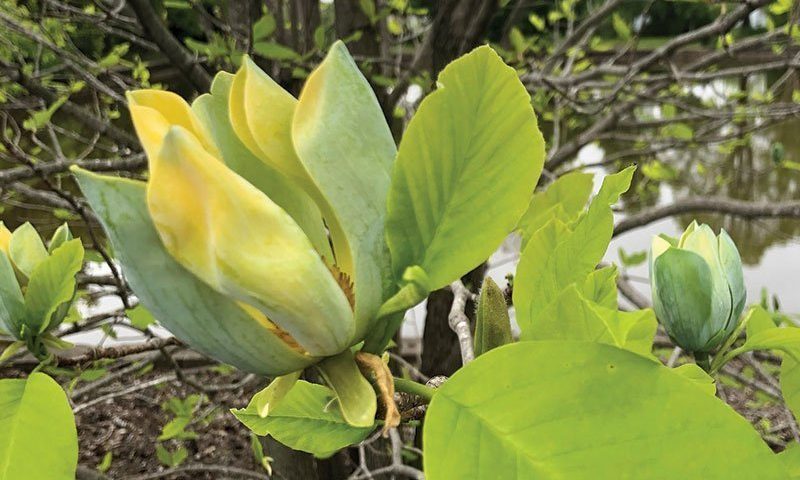 Cucumbertree Magnolia is a large, cold-hardy, fast-growing shade tree native to a large area of the United States and Ontario, Canada. This majestic tree has a tall, broad, symmetrical pyramidal growth habit and is perfect for a park or large open area. Cucumbertree Magnolia thrives in the foothills of the Appalachian Mountains where it enjoys rich, cool moist soil and consistently humid conditions. Large shiny leaves, fuzzy yellow buds, and showy fruits provide an ever-changing display of beauty.

Cucumbertree Magnolia is the hardiest magnolia native to the United States. This regional native is not found in large numbers. There are a few scattered around the upper Midwest, including Michigan and Ontario, Canada. Seeds and seedlings are sensitive to environmental conditions, and many are eaten by animals, which is why the Cucumbertree is found sparsely around its native range. Cucumbertree Magnolia is also the only Magnolia native to Canada, where it’s considered endangered.

The name “Cucumber Tree” comes from the immature green fruits which resemble cucumbers and turn a brilliant pink-red in late summer. Cucumbertree Magnolia maintains a very upright growth habit from a young age, like Tuliptree. Considered a large mature tree, it will reach an average diameter of 24 inches and live for 80-120 years. In ideal conditions, the trunk can reach 3-4’ in diameter! It’s considered easy to transplant as it has deep and deep widespread roots.

This unique deciduous beauty boasts huge leaves, broad pyramidal form, and four-season interest. Large fuzzy yellow buds adorn the tips in winter, blossoming into symmetrical greenish-yellow flowers in spring. Many flowers are sheathed in a blueish-green bract that might be the closest thing possible to a blue-flowered tree in Wisconsin! The flowers give way to the tree’s namesake, cucumber-like seed pods that mature to a bright showy red-pink by late summer.

Seeds eventually separate and hang from slender hairs in fall. The huge leaves are shiny and bright green with pubescence on the underside. Young bark has prominent round lenticels, turning dark brown and gray with age and deeply furrowed. All these unique features, plus its considerable stature, dense and symmetrical crown, make for an impressive shade tree with ornamental flair.

Cucumbertree Magnolia is not a wildlife magnet; however, birds and small mammals will eat the seeds. Blackbirds and Grackles enjoy the young fruit. White-tailed deer may occasionally browse young branches and buds.

Cucumbertree Magnolia is a host plant for the Eastern Tiger Swallowtail butterfly caterpillar. Papilio glaucus is a beautiful common butterfly found in southern Wisconsin, named for its yellow coloring with black striping on wings.

Cucumbertree Magnolia is a low-maintenance tree you site it properly. Appropriate cultural conditions are important for this tree to survive and thrive.

It requires a large growing area, good drainage, and consistently moist soil. It doesn’t do well in soil that’s compacted, too dry, or too wet. It prefers cool moist soil rich in organic matter, and a somewhat humid climate. Cucumbertree Magnolia thrives in the valleys and slopes of the southern Appalachian Mountains where conditions are optimal. Cucumbertree Magnolia is tolerant of a wide soil PH range, with a preference for slightly acidic soil.

Cucumbertree Magnolia is susceptible to leaf scorch if planted in an area that is very hot or dry and is also sensitive to an early frost. Sapsucker damage is commonly observed, but generally doesn’t seriously affect tree health.

Cucumbertree Magnolia doesn’t have any major pest problems but can be afflicted by scale insects and Nectria canker, which looks like sore-like wounds on twigs, branches, and trunks. Magnolia scale is fairly widespread in Wisconsin and any stressed Magnolia can be susceptible. Scale insects remove plant fluids, reduce flower and foliage production, and in some cases, can kill the tree. To avoid this issue, ensure proper siting and keep a young Cucumbertree Magnolia well-watered during hot dry periods, and protected during early frost events.

Magnolia was one of the first species of flowering plants to develop on this planet!

The specific epithet acuminate comes from the Latin meaning “long pointed leaf tip”, although the large leaves of the Cucumbertree Magnolia are more ovate than the traditional narrow-tapering acuminate.

According to the Native American Ethnobotany Database, Cucumbertree Magnolia was used by the Cherokee tribe to build structures, furniture, and make paper. As a medicine, it was used for stomach cramps, toothache, sinus infection, and indigestion. The Iroquois tribe reportedly created a decoction for venereal disease and the inner bark could be chewed to ease toothache.

Cucumber Tree wood is straight-grained and durable, similar to Tuliptree (Liriodendron tulipifera) (a.k.a. Yellow-poplar). It’s a valuable lumber source in states bordering the Appalachian Mountains, where Cucumbertree Magnolia wood may be combined with and sold as Yellow-Poplar. The lumber is used in pallets, crates, doors, siding, trim, fixtures, and furniture.

Cucumbertree Magnolia is a parent of the popular hybrid Magnolia ‘Butterflies,’ a much smaller variety growing to about 20-feet high by 15-feet wide, with beautiful yellow flowers.