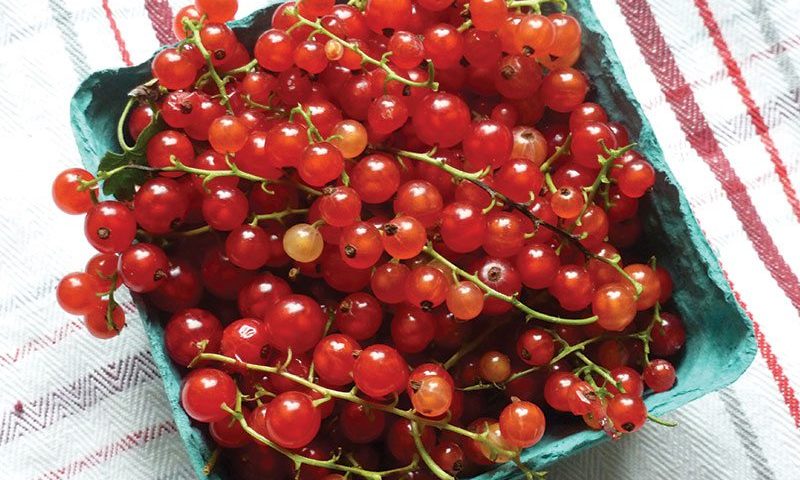 Red Currants (Ribes rubrum) and Black Currants (Ribes nigrum) are very popular and commercially produced in Europe. What would a British afternoon tea be without a Red Currant Scone amongst the offerings? The Germans call it “Johanissbeeren”, after John the Baptist whose birthday is celebrated June 24th, around the same time as the berries ripen, and use them in desserts and meat dishes. Russians create “Kissel” out of Red Currants, a sweetened juice that can be drunk or thickened with starch to dress everything from ice cream to pancakes. Both kinds of berries are extremely high in vitamin C and antioxidants, though Red Currants are the more palatable of the two eaten raw. Black Currants are more pungent so are usually processed into juice, jams, and jellies - the French use them to make Cassis liqueur.

Black Currants were a staple in the home medicine cabinet. Fresh leaves were rubbed onto minor wounds and insect bites. Tea made from the leaves was gargled for hoarseness and a sore throat. A spoonful of jam in hot water prevented respiratory infections. Sometimes they're called Quinsy Berries for their history in treating quinsy, an advanced complication of tonsillitis.

Currant production used to be huge in the United States, until they were dubbed “the forbidden fruit”. When European colonists began arriving to North America, they discovered that Eastern White Pine was an ideal timber species, especially for tall ship masts. In 1705, a Lord Weymouth arranged to ship North American pine seedlings to be grown overseas. Blister Rust first began appearing on White Pines in Germany and Russia and quickly spread, the cause of it unknown. Demand for American White Pine lumber increased and by the 1800’s deforestation was taking a toll so seedlings from Europe were brought back to America to re-establish the tree stands. When it was discovered that Ribes species were necessary to complete the pathogen’s life cycle, a federal ban on growing them was implemented. Nowadays, the ban has been lifted in most states (including Wisconsin) as new, disease-resistant cultivars have been introduced, and our native White Pine has grown more resistant to the pathogen.