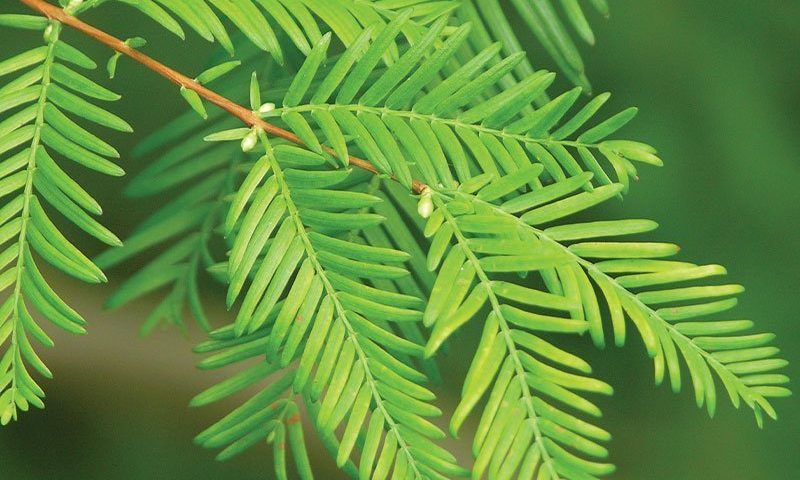 Dawn Redwood is a deciduous, coniferous tree that has an upright, pyramidal form slowly reaching heights of up to 100 feet. New foliage emerges light green in spring and turns into an appealing red-bronze color in fall. This conifer is deciduous, meaning it sheds its soft, feathery foliage before winter. This tree also features beautiful exfoliating bark which becomes the star of the show in winter after the foliage drops.

Sequoia trees are the largest trees in the world. Due to their size, they are typically too big for gardens and landscapes unless you have acres to spare. However, Dawn Redwood doesn’t get as large as its colossal family members. This makes it a viable option in most Wisconsin landscapes, with the exception of smaller gardens and urban lots. It’s an amazing specimen in public parks, large estates, farms, and boulevards. This tree likes consistent moisture and can tolerate some flooding, making it a good choice for larger rain gardens.

In terms of soil preference, this redwood is versatile. It prefers sites with consistent moisture that are slightly acidic to neutral pH. It grows best in a well-drained loam but will tolerate other soil textures like sand or clay.

Foliage progression from Spring to Winter on Dawn Redwood.

Dawn Redwood is relatively free of pests. Metasequoia Rust is an uncommonly occurring fungal disease in spring. When the fungus invades, leaves will lose their green and turn yellow. There are yellow-to-brown protruding spores on the surface of the disease spots. They can be observed on the back of leaves, petioles, and leaf veins. In serious cases, and if left untreated, the leaves of the entire tree may wither and fall off. If your tree is infected with Metasequoia Rust, simply contact a certified arborist to remove the infected branches and leaves.

We invite you to check out the Arborist For Hire lookup at the Wisconsin Arborist Association website to find an ISA Certified Arborist near you.

Dawn Redwood is an ancient tree that only existed in fossil records dating back 50,000,000 years ago to the Mesozoic era. It was thought to be extinct until the species was discovered by Chinese forester, Gan Duo, and Chinese botanist, Wang Zhan when a small population was found in a remote valley of the Szechwan province in 1941. Villagers who lived near the trees called them “shui-shan” meaning “water fir” and had long revered them as gods. Shrines were built beneath them where offerings commonly were left. One of these trees was later sampled to produce the entire seed source for trees grown outside of China. It was later introduced to the United States in 1947. That same year, a more detailed exploration revealed that the species had a range over an area of about 800 km2. The center of the population, which supported about 6,000 trees, was in the nearby Shuishaba valley. In that valley, an isolated specimen was discovered and is currently the tallest Dawn Redwood ever recorded. It was approximately 165 feet tall. It was unfortunately killed by a lightning strike in 1951.

The tallest Dawn Redwood still standing today is 123 feet tall, living at Longwood Gardens in Kennet Square, Pennsylvania. It is estimated that it was planted around 1950.

Dawn Redwood is the sole living species of the Metasequoia genus.

Where you site your Redwood will determine what plants would do well planted near it.

If planted in a site with acidic soil, we recommend planting alongside other acid-loving plants such as Rhododendron, Hydrangea, Azalea, Japanese Pine, Fothergilla, Pachysandra, Ferns, or Holly.

If you are planting in a wet site, then we recommend planting alongside moisture-loving plants such as Aster, Harlequin Blue Flag Iris, Spiderwort, Great Blue Lobelia, or Sedges.