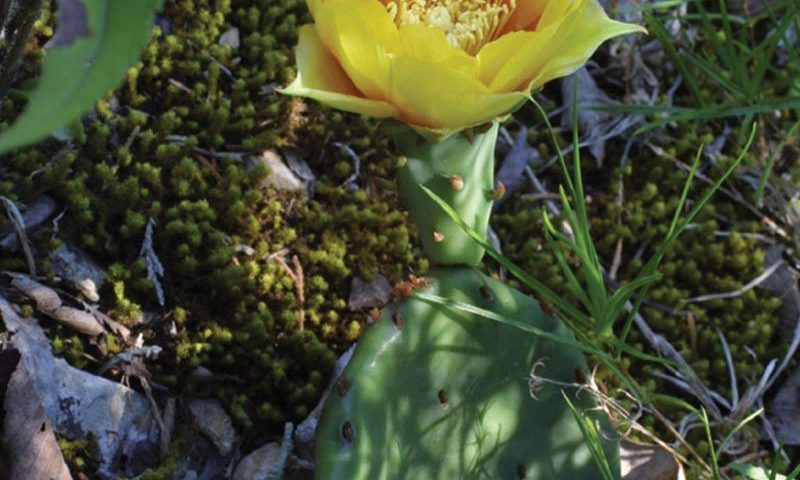 Eastern Prickly Pear is a Wisconsin native perennial cactus. Opuntia humifusa, commonly known as the Eastern Prickly Pear, is readily found in the southern part of the state. The foliage is in the shape of flattened paddles covered with sharp spines. Its bright yellow flowers give way to edible, reddish fruit.

The Eastern Prickly Pear cactus may also be known as the devil’s tongue because the pad-like foliage of this cacti resembles a tongue covered in stout spines. One or more flower buds can develop on the top curbed margin of each pad. The showy yellow flowers are diurnal, meaning they last only about a day. Usually, many flower buds give the plant about a month of blossoming. The blooms are followed by edible, ovoid sessile fruits, which are a red to reddish brown color. The fruit’s flesh is green to red and either sour, sweet, or bland depending on the stage of ripeness and local ecotype.

Opuntia humifusa is a low-growing, slow-spreading plant. The upper pads will occasionally break off from the lower pads and fall to the ground. The detached pads can develop new roots, creating new plants that are clonal offsets. Eastern Prickly Pear would be a great addition to dry planting locations such as rock gardens, sandy slopes, and sandy prairies and could even be used as a ground cover in a small area. Technically, the pads are evergreen, although they usually turn a little yellowish/brown and look quite scraggly in winter, although the pads green up nicely again come spring.

Eastern Prickly Pear attracts a myriad of pollinators. Both long and short-tongued bees will visit the flowers, including the bumblebee, leaf-cutter bee, carpenter bee, and halictid bee. Some insects feed on the pads, such as the larval stage of the Eastern cactus-boring moth and Arge tiger moth. The fruits and seeds are eaten by low-foraging avian and mammalian visitors, such as wild turkeys, squirrels, striped skunks, white-tailed deer, and ruffled grouse. Typically, wildlife avoids eating the pads of Eastern Prickly Pear because of the spines and bristles; however, the ornate box turtle has been observed feeding on the pads and fruit. If the pads become large enough, it provides nesting habitat for the bobwhite quail and a protective cover for snakes.

The typical native habitat of this cactus includes sandy woods, savannas, and prairies, as well as rocky bluffs, sandstone, and limestone glades, rocky or sandy slopes along rivers and lakes, or even gravelly areas alongside railroad tracks. This is an easily grown cactus thanks to its tolerance to drought, humidity, and cold winter weather.

We recommend using thick gloves when handling the pads due to the barbed glochids. They can easily pierce human skin.

There aren’t any insect or disease issues you need to worry about when growing Eastern Prickly Pear. Various kinds of root rot may occur when grown in soils with poor drainage or excess moisture.

Despite having edible fruit and pear in the name, Eastern Prickly Pear is not a member of the pear family.

The genus name, Opuntia was used by Gaius Plinius Secundus (A.D. 23-79) or more famously known as Pliny the Elder, a Roman author, naturalist, philosopher, and commander of the Roman Empire’s navy and army. Pliny used the term Opuntia about a Greek town called “Opus” where a cactus-like plant grows. Although, the cactus-like plant that does grow in the town of Opus is completely unrelated to the Eastern Prickly Pear. The specific epithet Humifusa is derived from a combination of two Greek words, ‘humus’ meaning “soil” or “earth”, and ‘fusus’ meaning to “spread out” or “extend”.

Opuntia humifusa is native to all but 11 of the westernmost United States. It’s rare in Pennsylvania and endangered in Massachusetts. Unfortunately, it has been purposefully eradicated from many locations across the United States due to its sharp thorns. It is often listed as a weed; although it’s not a weed, it’s not invasive; it’s a native plant!

There is a long history of Eastern Prickly Pear being eaten by Native Americans and Mexicans. The fruits are edible and can be eaten raw after removing the skin. Jellies, candies, and other sweets are also often made from its fruit. The pads are also edible and have been roasted and eaten as a vegetable. Today, the plants are farmed, and both the pads (known as Nopalito) and the fruits (known as Tuna) are found in groceries across the U.S. and Mexico. There are many recipes on the internet for using both Tuna and Nopalito. David Griffith’s “The Tuna as Food for Man” published in 1907 and supported by the U.S. Department of food and Agriculture, discusses the consumption of Optunia and its culinary usage.

Instead of foraging wild plants, we recommend purchasing them through a grocery store and letting the wildlife enjoy the rest.

Because Eastern Prickly Pear thrives in hot, sunny, and dry planting locations, consider pairing with other plants that would thrive in the same conditions, such as Sedum (Stonecrops) or Sempervivum (Hens & Chicks)