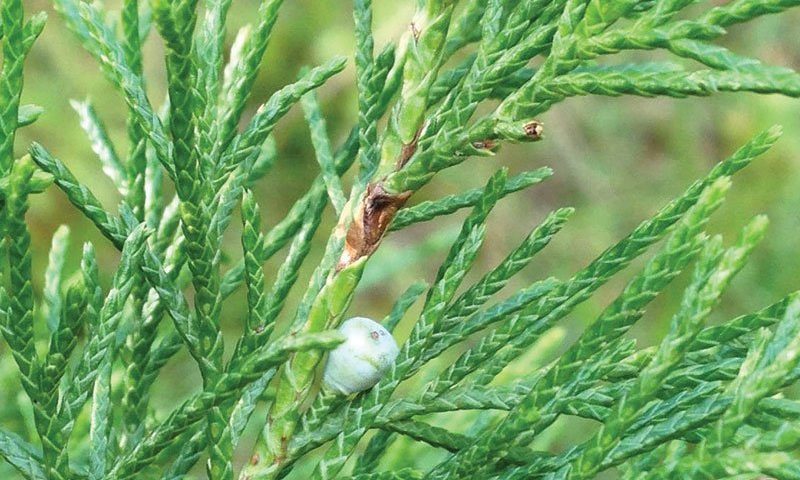 Eastern Red Cedar is a hardy evergreen native to much of the eastern United States. Commonly found in rocky, dry soil it is best to simply leave it be once established. Notable for its pretty, reddish, exfoliating bark and evergreen leaves that develop a brownish/purple hue in winter. Females produce small modified cones late in the season that looks like beautiful little blueberries.

Windbreak or Screen: Dense foliage provides excellent coverage. Due to its hardiness, this tree can be put in an area with compact soil or clay, as well as thrive in rocky soil or even in an area prone to drought. Though Eastern Red Cedar will flourish where many others would not, do not plant in a site with full shade or with soil that is constantly wet.

It should be noted that there is some variance in a general form. Eastern Red Cedar often grows as a pyramidal evergreen but can grow columnar or oval in other conditions/environments. There is also variance in size. This is seen when comparing red cedar thickets that grow on rocky bluffs, where their shape is more irregular and shrubbier, to the trees that are seen in landscaping situations.

Eastern Red Cedar is a host to Cedar Apple Rust. When using in any landscape, avoid planting near crabapple and apple trees as this creates more nearby available hosts. It would be beneficial to provide at least a hundred yards of clearance if there is an apple orchard or crabapple in the vicinity. Read more on Cedar Apple Rust below.

Game birds and songbirds depend on this tree during the winter, using the foliage as a cover in the winter and a safe place to nest during the breeding season. Juniper berries are a high-energy food and are loved by many. Cedar Waxwings are the most notable, they are seen eating them so often that Cedar is their first name! Many other songbirds and gamebirds (i.e turkeys) eat the seeds of the pretty blue cones, conveniently dispersing the seeds as they pass their waste. Bear, fox, opossum, chipmunk, and mice feed also feed on seeds.

Deer rely heavily on red cedar in the coldest of winter. They use the trees as cover from cold and tough weather, making the base of this tree a nice place to find sheds. In a particularly difficult winter where nothing else is available, they may forage on the leaves of mature trees. Young plants (1-3 years) have spiky, pricklier leaves that are much less palatable.

Eastern Red Cedar tendency to brown in winter – do not be concerned.

The lowest branches may need to be pruned to provide clearance along sidewalks, streets, or driveways so people or vehicles can pass. If possible, consider using Eastern Red Cedar with enough space so that pruning isn’t necessary. On the plus side, if you choose to prune it, the bark is attractive.

Bagworm, Juniper scale, Juniper webworm, and mites cause yellowing and browning of the needles. They can be picked off or treated when found.

Eastern Red Cedar can experience dieback if ice develops and persists on the branches.

Its range is expanding farther west due to fire suppression. Eastern Red Cedar is highly flammable, its bark is even used as tinder to start fires. In a location where the terrain is difficult and fire suppression is enacted, Eastern Red Cedar establishes itself and grows in thickets, replacing the native prairie plants that normally follow in succession after a fire.

The spores can travel over a mile. The visual effect of this fungus is different for each plant species, but the key component is that it will be a rust color. In the case of Eastern Red Cedar, the fungus forms in early spring after rainy weather and manifests as a rather large, rust-colored, Koosh ball-shaped, spherical structure called a telial horn. Eventually, spores are released. In the case of apple trees (Malus), the spores land and germinate on the leaves or fruit, giving the leaves rust-colored spots. Cedar Apple Rust can affect fruit yield in an apple tree and can potentially weaken or kill Eastern Red Cedar. It can be treated with a fungicide. Do your research as some areas have local restrictions concerning planting hosts of this disease near apple orchards.

The oldest known Eastern Red Cedar was found in Missouri and aged to be 795 years old!

The wood is naturally rot-resistant. Early settlers used its wood to build furniture, rail fences, and log cabins. A chemical in the oil of the wood repels insects and, historically, leaves and wood chips were used as an insect repellent. The leaves can also be crushed and used to flavor soups or teas. Native Americans used it for coughs, colds, and dysentery, as well as to expel intestinal parasites. The berries were also chewed to treat mouth ulcers.

Chests are made from this wood, both because it smells good and also in the hopes that it will keep the moths out. Essential oil from the wood is used in soap, insecticide, moth repellents, deodorant, floor polish, perfume, and much more. This stuff smells wonderful! Berries are rather ornamental and used in Christmas wreaths and swags. The tree itself is sometimes sold as a Christmas tree, although the foliage can be a bit prickly, thus proving no evergreen is ever safe during the Christmas season. Juniper berries are sometimes used as a flavoring in alcohol.

Cedar wood contains oils and chemicals that work well as pesticides but can cause health problems when inhaled by mammals. Sometimes called “Pencil Cedar”, this wood is commonly used to make pencils. Workers exposed to cedar dust in mills also experience a higher occurrence of asthma.

In the past, using cedar bedding for small mammals was common practice as the smell helped mask the odor and keep the insects at bay. It is no longer recommended and hard to find in pet stores as the use of cedar bedding has been proven to cause respiratory issues and dermatitis in small mammals.

There are several cultivars of Eastern Red Cedar:

In a landscape setting, plant with other native shrubs that enjoy full sun and dry soil such as Running Serviceberry, American Filbert, or Bush Cinquefoil.

Big Bluestem and Prairie Dropseed would complement the color and texture of Eastern Red Cedar. Butterflyweed, Prairie Blazing Star, Wild Bergamot, and Hairy Wild Petunia are all beautiful natives in their own right and would look fabulous planted by Eastern Red Cedar.