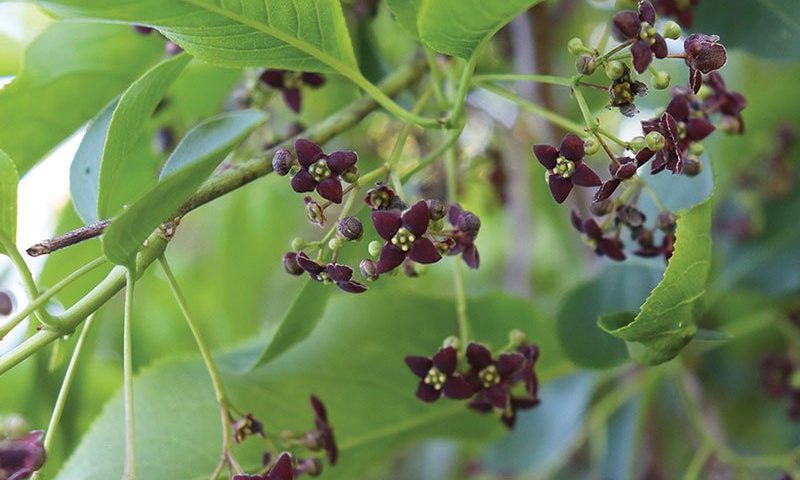 There is only one Wisconsin native shrub that turns observers into an Italian plumber who saves the princess in their spare time. Finding this shrub growing in the wild is sure to make you jump with one first raised and scream out “Wahoo!” like Mario. We also often refer to Eastern Wahoo (Euonymus atropurpureus) as the native burning bush.

Eastern Wahoo is a large growing shrub that can eventually obtain small tree status. This plant is most well-known for its showy, four-pointed star-shaped fruit and its brilliant fall color. You’ll find this shrub growing naturally in mesic woodlands, shaded riverbanks, and woodland borders. In a woodland setting, it’s most found in Maple-Basswood, Maple-Beech, and other similar deciduous woodlands. The largest and healthiest specimens are usually found in deep, rich humus soils, limestone soils, and lowland woods.

This shrub is a great choice for a naturalized area or restoration project that needs some lively colors. In a landscape setting, this shrub would make a fine specimen or as a hedge or screen. The gothic red and purple flowers aren’t particularly showy, the main ornamental value of this plant comes from its fruit and fall color.

Just because the flowers aren’t exactly show-stoppers, that doesn’t mean they aren’t important. Bees, especially the Green Sweat Bee, are frequent visitors when this shrub is in bloom. The foliage of the Eastern Wahoo is enjoyed by several species of moth larvae such as the Saddleback Looper, Pyalid Moth, American Ermine Moth, and the newly discovered Euonymus Leaf Notcher. The fruit of this shrub isn’t the most popular with birds, although the Northern Flicker, Brown Thrasher, Eastern Bluebird, and Eastern Towhee do consume the fruit to a limited extent.

Caring for Eastern Wahoo starts with proper siting. This shrub prefers dappled sunlight to light shade with moist to mesic conditions. It can tolerate a wide range of soil types so long as they are well-draining. While this plant can deal with compacted soils, it needs to be on the dry side as Eastern Wahoo is intolerant of being waterlogged.

This shrub grows to be large and quite gangly. Pruning can be done via the Thinning Cuts Method of Pruning to improve form if desired. We invite you to check out the Arborist For Hire lookup at the Wisconsin Arborist Association website to find an ISA Certified Arborist near you.

When it comes to the Eastern Wahoo, it’s generally free of serious pest or disease problems; however, there is one exception, the Euonymus Scale (Unaspis euonymi).

Euonymus Scale is a species of armored scale that can completely defoliate or even kill plants in the Euonymus genus. This insect also attacks several other plants such as lilac, hibiscus, and pachysandra. In general, plants growing close to buildings are more susceptible to damage because there is less air circulation and less moisture. During a light infestation, yellow or whitish spots appear on the upper leaf surface. The scales themselves will typically be concentrated along the stems and lower leaf veins. In the case of a heavy infestation, plants will look water-stressed, leaves will develop yellow spots before falling, and twigs and limbs may die.

If your Eastern Wahoo has scale, we recommend contacting an ISA arborist near you to assist with a pest management plan.

Euonymus atropurpureus may also be referred to as just “Wahoo”. Although it’s named ‘Eastern’ to separate from the ‘Western’ species, Euonymus occidentalis, which you’ll find growing on the west coast.

Wahoo was a Dakota term for the plant, meaning “arrow-wood”. The bark of Eastern Wahoo was commonly used by pioneers and Native Americans, especially those belonging to the Dakota as a purgative. While this part of the plant was formally used for medicinal purposes, it should be known that all parts of the plant are poisonous if ingested.

The genus name Euonymus is derived from the ancient Greek name ‘Euonymon Dendron’, which is Latinized into ‘Euonymus’. The word “Euonymus” has the meaning ‘of good name’ or ‘a prosperous name.’

The specific epithet atropurpureus means “dark purple” and refers to the flower color.

If you plan to create a naturalized screen or thicket, great companions for Eastern Wahoo include Gray Dogwood, Bush Honeysuckle, American Filbert, and Common Snowberry.

Eastern Wahoo tolerates Juglone, the growth-inhibiting chemical produced by the Black Walnut tree. If you have a nearby Black Walnut and have always dreamt of planting a Wahoo, it makes an excellent understory planting.

If you are using Eastern Wahoo as a landscape specimen, consider pairing it with brightly colored perennials to complement its liveliness. Yarrows, Wild Geranium, Coneflower, Iris, Butterflyweed, and Asters all make great companions.