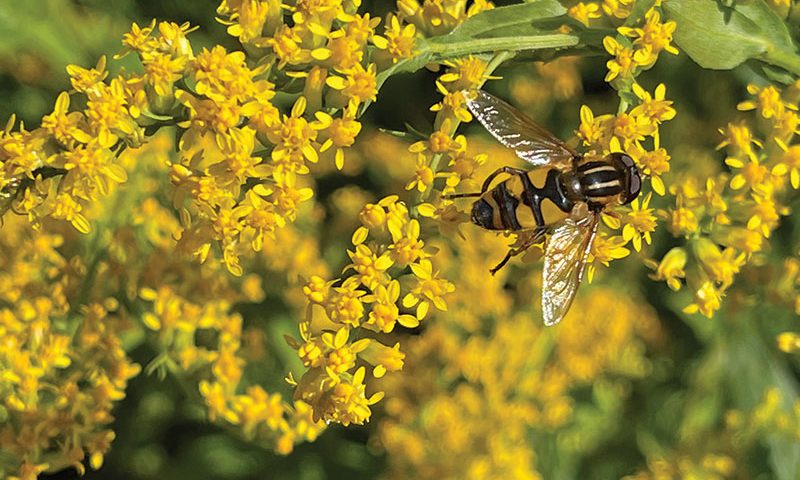 There is perhaps no greater indicator of the changing seasons than the appearance of Goldenrod. As temperatures cool and hard-working summer perennials wind down, Goldenrod takes center stage with a supporting cast of asters and ornamental grasses. Graceful arching wands are covered in luminescent yellow flowers that brighten the landscape, ushering in autumn weather while helping prepare our pollinator friends for the coming winter. Mistakenly associated with hay fever, Goldenrod is not the bane of allergy sufferers (blame ragweed) and is unfairly considered a weed by many. Trust us – it’s not!

You may also know this plant as Elm-leaved Goldenrod or Elmleaf Goldenrod.

Goldenrod is underutilized in gardens, but it shouldn’t be! With several native species in the Midwest, including Zig Zag, Riddell’s, Stiff, Showy, and Upland White, Elm-leafed Goldenrod is a particular favorite as it is adaptable, low maintenance, and a pollinator magnet! Native to dry woods in Wisconsin, Elm-leafed Goldenrod prefers well-drained, medium-moisture soil. It grows well in full sun to part shade, spreading by rhizomes to form colonies making it an excellent choice for woodland gardens and edges, along streams, and for restoration projects where it has room to spread and flourish.

The flower spikes are great in floral arrangements, both live and dried, providing nice height and texture. Fill a pitcher or Mason jar with a handful of Elm-leafed Goldenrod for a simplistic but impactful visual delight!

Blooming later in the season when most other perennials have completed their flowering cycle, Goldenrod is a boon for pollinators and is considered a “cornerstone” plant by University of Delaware entomologist Doug Tallamy. Stand nearby even just one Elm-leafed Goldenrod and observe the activity — you will be amazed at all of the different types of bees that will find their way to this smorgasbord of goodness. Imagine how much food and shelter a colony of Elm-leafed Goldenrod can provide to wildlife!

Elm-leafed Goldenrod provides vital late-season nutrients and is visited frequently for its pollen and nectar by, Cellophane, Carpenter, Long-Horned, Cuckoo, Sweat, Miner, Yellow-Faced and Leafcutter bees, Syrphid flies, and wasps. Monarch butterflies will fuel up on Elm-leafed Goldenrod nectar ahead of their migration south, and Goldfinch, Juncos, and Sparrows will eat the seeds in winter.

Soldier beetles and lady beetles, beneficial insects that muscle out those not-so-beneficial invaders, rely on Elm-leafed Goldenrod to fatten up ahead of winter. And while some might crinkle their noses when thinking of mice and voles, they too rely on the seeds of Elm-leafed Goldenrod for sustenance over the winter. Just remember that they are also an important part of the food web sustaining owls, foxes, wolves, hawks, and more!

While drought tolerant once established, it is important to keep newly planted Elm-leafed Goldenrod moist for the first several months. In triple-digit temperatures, plan on checking them more frequently to ensure they do not dry out.

Fertilization is not necessary as they do well in many soil conditions. The best way to give them a boost is to apply compost in the spring.

Elm-leafed Goldenrod can occasionally have issues with powdery mildew, rust, and leaf spot, which can be prevented by periodically thinning to increase air circulation.

Deadheading flower clusters when they’re done blooming may extend the flowering period. There is no need to cut them down in autumn, as wildlife uses the seeds for nourishment.

There are no serious insect or disease problems that affect this wonderful native perennial.

The genus name Solidago is from the Latin word ‘solidus’ meaning “to make whole” or “to heal” and ‘ago’ in reference to the medicinal healing properties of some species of plants.

The specific epithet ulmus refers to the shape of its leaves as they are said to resemble those of elm trees.

The Meskwaki tribe used Elm-leafed Goldenrod as a smudge to revive unconscious patients.

Many a poem has been written about Goldenrod and their bright yellow flowers including “Afire” penned by Canadian poet Angelina W. Wray which likens Goldenrod to flames in the forest.

Afire
Willow trees are turning,
Maples leaves are burning,
Goldenrod’s afire!
Fairy torches glimmer,
Woods are in a shimmer
And the flames leap higher!
November rain is all in vain,
Down, down, it dashes.
O’ goldenrod! Goldenrod!
You’ve burned to the woods to ashes.

Nestle amongst other tall perennials such as Sky Blue Aster, Smooth Aster, and Heath Aster for a late-season buffet for pollinators.

Elm-leafed Goldenrod is a great complement to fine ornamental grasses such as Big Bluestem, Bottlebrush Grass, or Prairie Dropseed, with its bright flowers and textural foliage.

Plant along woodland edges with Prairie Phlox, Wild Quinine, and Culver’s Root for a blend of bloom times and interesting textures.