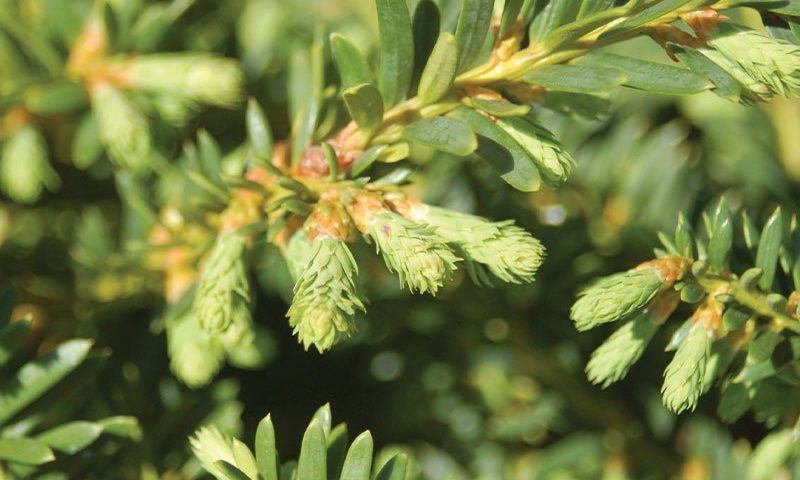 Emerald Spreader® Yew is a low-maintenance Japanese yew that is noted for its short, wide, emerald green needles that are very bright in color. The low spreading stature and extreme density of this plant makes it useful for small areas where a low plant is desired. Its shade tolerance makes it a versatile plant in hard-to-site locations.

The low, spreading form of this variety makes it an excellent choice for a ground cover for slopes. The slow growth rate, bright emerald green needles (evergreen), and wide adaptability to both sunny or partly shaded sites also makes it a wonderful plant for foundation plantings and even for rock gardens (provided it has adequate water). Very versatile in the landscape! Use as a compact, dense hedge along sidewalks, in small planting beds, or in commercial areas/parking lots as this shrub is extremely low maintenance. Emerald Spreader® fills in spaces quite nicely when used as a mass planting.

Yews are dioecious meaning they are either a male or female plant. Only the females produce fruit. Emerald Spreader® Yew is a female yew thus producing the bright red fleshy arils that female yews are prized for. Each of these tiny colorful fruits will have one seed in it. The fruit is relished by birds.

All yews are easy to shear and maintain in any form desired. They tolerate shearing well. Due to the low stature and very dense form, this variety has, little if any shearing would ever be required (unlike most spreading yew varieties that require annual shearing to control plant height). Learn more about Hedging & Shearing >>

Unlike other yew varieties, Emerald Spreader® Yew is not as tolerant of poorly drained sites. Avoid planting in wet sites as it can be prone to root rot. Even having one low dip in the grade of a planting site can cause the plant placed there to succumb to root rot while others just a few feet away flourish. Site the plants accordingly and prepare the site carefully to avoid this issue. It is susceptible to winter burn; therefore, it’s ideal to site in a location that is less exposed to harsh winds. This evergreen is rabbit resistant!

This selection was brought to the U.S. from China. The bright red berries that emerge in fall bring added interest to dark needles that retain their color year-round. Long-lived, this variety gives us the opportunity to plant Yews where they wouldn’t typically have enough space, as most other Yew varieties grow much taller.