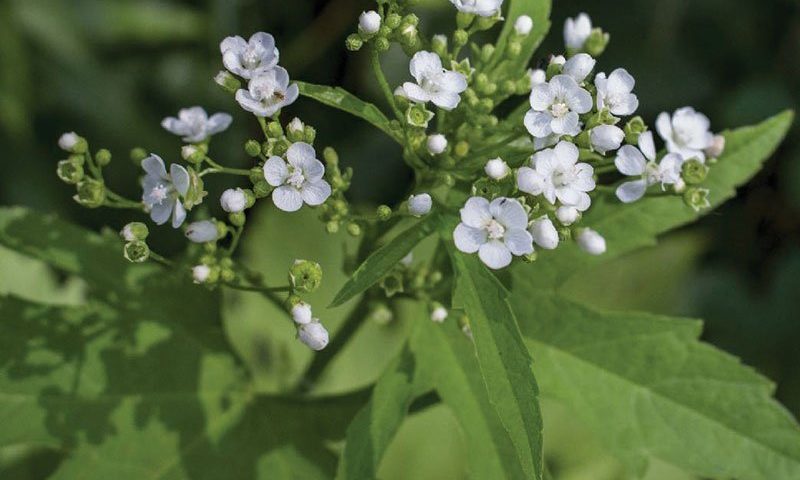 This unique, water-loving, native perennial is considered a Species of Concern in the state of Wisconsin. Coming across a stand of these plants is exciting, not just due to its rarity, though that is a part of it, but also because the foliage gives off some strong Jurassic Park vibes, especially for our temperate climate. Female plants sport fragrant white flowers arranged in loose panicles that open in the early morning and close at dusk.

Glade Mallow belongs in streambanks, swampy lowlands, moist woodlands, wetlands, rain gardens, floodplains, and marshes. The theme here is moisture! If you have full sun and reliably moist soil, then Glade Mallow would love to go home with you! Conversely, it will not do well if the soil is allowed to dry out, and although it will grow in part shade, this will reduce its vigor considerably.

Use this native species in restoration projects to stabilize waterways, as it thrives in moist, rich soil and spreads by rhizome. Glade Mallow is a valuable contributor to native biodiversity as it will displace invasive exotics such as Phragmites and Giant Hogweed. This is a rich, underplanted, addition to a restoration project and a boon to pollinators.

Glade Mallow is dioecious, meaning some individuals will have female flowers while others have only male flowers. The fragrant female flowers have five petals and are arranged in a showy, loose panicle. Please note that fruit set will only occur on female plants if there is a suitable male plant nearby. In other words, for fruit to set, plant several individuals reasonably close. The more you plant, the more likely you will end up with both sexes. Also, a stand of them is a fantastic site to see.

Glade Mallow is browsed by ungulates like deer and cattle.

Thanks to Jim McCormac’s discovery, there is reason to believe that Glade Mallow may be a host plant for a rare noctuid moth, Bagisara gulnare. Read more about this discovery from the horse’s mouth (respectfully) at Ohio Birds and Biodiversity: A rare plant and Google Earth. (jimmccormac.blogspot.com)

Glade Mallow is very low maintenance when planted in the right site. If planted in a site that has a tendency to dry out, then you will need to water it regularly (without fail) as it will simply not tolerate drying out. This time and effort can be saved by planting on a naturally moist/wet site.

Glade Mallow does not do well in shade. Do not allow overgrowth of surrounding vegetation that will eventually cast shade and cause it to fail.

Deer, cattle, and horses will browse on Glad Mallow. Protect it during the establishment period.

No common diseases are mentioned in literature nor are any present in our nursery.

Environmental: Glade Mallow is endemic to the north-central U.S. and is considered a threatened species in the state of Minnesota, and a species of concern in Wisconsin. This plant is sensitive and, because it is often found along waterways, can be an indicator of upstream disturbances. Pollutants in runoff from agricultural fields and construction zones as well as from herbicides applied on roadsides and railways, and even felled trees blocking waterways can have an effect on its ability to thrive.

Reproductive: Aside from its spread by rhizome… Occasionally, the hollow taproot will break from the mother plant, and be transported by waterways, causing it to establish itself elsewhere.

Historical Use: The Meskwaki people used the root of this plant as a hunting charm, a remedy for piles, to ease childbirth, a treatment for ‘women’s troubles’, and to reduce swellings of old sores.

Name: There are no close relatives to Glade Mallow that are alive today, making it a relic of the past. Though it is in the same family as Hibiscus (Malvaceae), the genus itself, Napaea, is monotypic, meaning there is only one surviving member of the genus in existence. It is indeed one-of-a-kind!