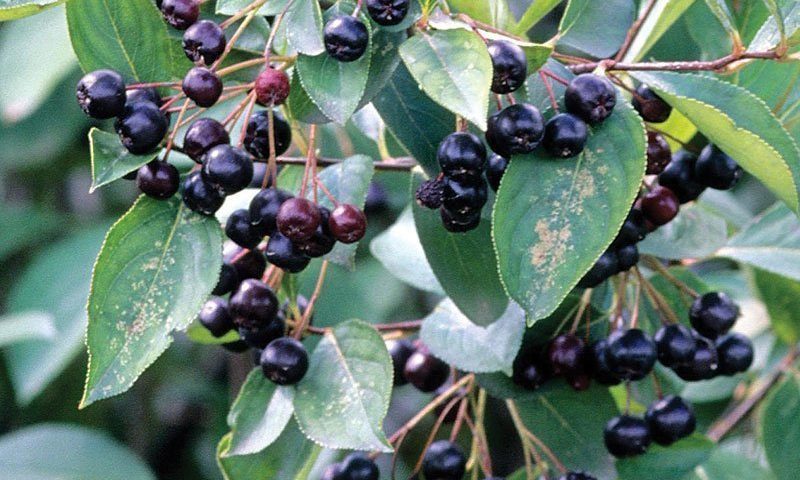 Glossy Black Chokeberry is a suckering shrub native to Wisconsin with four-season interest. It has fragrant white flower clusters in Spring, brilliant fall color, and large shiny dark berries that persist throughout winter. It provides habitat and food for wildlife and is a great plant for natural areas with wet soil. This interesting native shrub requires minimal maintenance and tolerates many soil conditions. May also be known as Black Chokeberry.

This medium-sized shrub has an upright, somewhat rounded form and spreads moderately by suckers to form colonies. It will become leggy towards the bottom half of the plant, so is good for the back border or in a mixed screen with other native shrubs. Does especially well in naturalized or woodland garden areas where it can spread. Can also be used in mass planting, wetland restoration, or erosion control, especially in wet areas. It could be a suitable substitute for Euonymous alatus (burning bush) which is becoming invasive in our area.

Glossy Black Chokeberry has larger leaves, flowers, and fruit than the straight species, grows more vigorously, and tends to sucker less, all of which contribute to its preference as a landscape plant.

With its fragrant white flowers in spring, glossy green foliage throughout summer, and brilliant fall color display of oranges, reds, purples combined with clusters of large purplish blackberries that ripen in late summer and persist into winter, this shrub exudes natural beauty and interest in every season.

It is adaptable to a wide range of soil conditions, evident by its wide geographic range. Glossy Black Chokeberry can be found throughout the eastern and midwestern United States and Canada, from southern Ontario to northern Georgia. It prefers wet to moist acidic soil and is most commonly found in wetland areas, but is also found in upland areas, forests, prairies, and sandy soils. It is tolerant of salt, occasional drought, and occasional flooding. An easy plant to grow, it will produce more fruit and foliage in full sun, but also grows well in partial shade.

Glossy Black Chokeberry attracts birds and provides shelter for many varieties of wildlife. Birds do not typically eat the berries until late winter. Speculation as to why birds do not eat chokeberries earlier in the season ranges from the high tannin content, firmness of the berries, or low protein content as compared to other food sources. In any case, the fruit display typically remains on the plant well into winter. After the berries become raisin-like and other food sources dwindle, wildlife will then eat them.

The leggy thickets formed by this shrub provide shelter and nesting areas for birds and other animals. It is browsed by deer and rabbits.

Suckers may be removed throughout the growing season to control spreading if desired.

Thinning cuts pruning can be used on a mature plant if needed to rejuvenate the appearance and encourage fruit production by allowing more light into the branches. Glossy Black Chokeberry is a slow grower so pruning may only be needed if planted in rich soils, and likely at intervals of 5 years or more. Remove 1/3 of canes in late spring or early fall. It is important to prune this shrub at the right time to allow the plant to produce new growth and seal pruning wounds before it goes dormant. If pruned at the wrong time (too late in fall or during winter) wounds will “bleed” throughout winter, leaving dark streaks on branches.

Glossy Black Chokeberry does not have any serious disease or insect pest problems in our area.

The root words in the specific epithet – ‘melano’ and ‘carpa’ – literally translate to ‘black fruit’.

The genus Aronia refers to a species of Sorbus with fruits similar to chokeberry – Sorbus aria, or Common Whitebeam.

The common name “chokeberry” comes from the high tannin levels in the fruit, which gives them their sharp astringent taste. Though tart, the fruits are edible and have a very high antioxidant content. They have many purported health benefits and may even be considered an up-and-coming ‘super fruit’. They are cultivated and used extensively in Russia and eastern Europe in juices, wines, baked goods, jams, and health tonics. The North American Potawatomi tribe historically used the berries when making pemmican, and the bark and berries were also used as an astringent.

Some plants in the Aronia genus have been found to have apomictic seed, a trait in which a plant is able to produce seed asexually, and all plants grown from those seeds are clones of the parent – that is, genetically identical. Check out the article (PDF) Aronia: Native Shrubs With Untapped Potential, by Dr. Mark Brand.

Chokeberry is quite commonly confused with chokecherry. While chokecherry is well known for having similarly astringent fruits, is in the same botanical family as chokeberry, and is also a Wisconsin native great for attracting birds, these are two separate and very distinctly different plants. Chokecherry (Prunus virginiana) is in a different botanical genus and, while shrubby, is considered a tree and can grow to be 30 feet. It is also susceptible to many diseases that commonly afflict the Rosaceae family, its fruit grows in drupes, and the seeds of the fruit are poisonous.

Consider combining Glossy Black Chokeberry with other native shrubs such as Grey Dogwood, American Filbert, or Common Witchhazel to create a mixed screen. Add smaller shrubs such as Common Snowberry, New Jersey Tea, or Meadowsweet along the front of the border for a layered effect and even more wildlife appeal. Add in some Red Milkweed to attract Monarch butterflies and other pollinators!