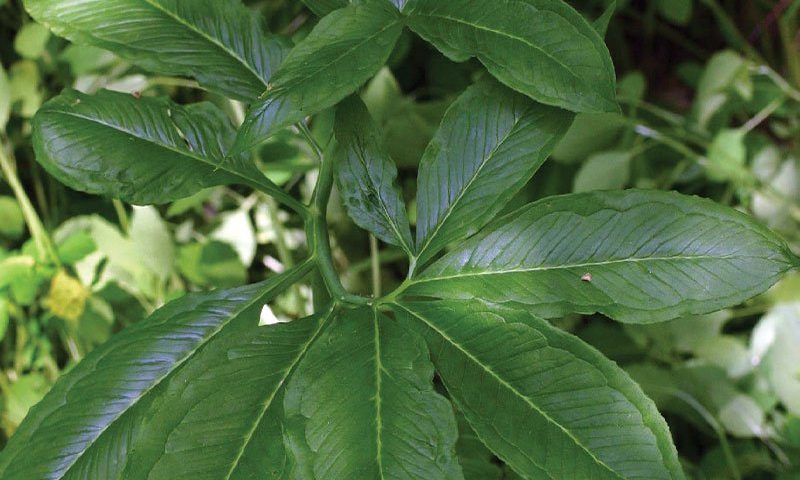 Did you know Wisconsin has a dragon that resides in our wet, shady forests? Arisaema dracontium, commonly known as Green Dragon, is a bizarre-looking herbaceous perennial. This spectacular wildflower is a rarer find than its cousin, Jack-In-The-Pulpit (Arisaema triphyllum). Its flowers first appear in tiny, yellowish clusters surrounded by a modified leaf that resembles a hood; this is known as a spathe. A long, tapering wand emerges from the top of the cluster, known as a spadix. The elongated spadix is often referred to as “the dragon’s tongue.”

Green Dragon is a unique perennial that would make an excellent choice for shaded woodland gardens. The foliage of this plant is rather exotic looking. A single leaf will be dissected into 7-15 deep lobes arranged in a semi-circle. The leaflets can get rather large, reaching more than a foot across mature plants. Although perhaps the most spectacular feature of this plant is not the leaf or blossoms, the crimson berries appear at the cusp of summer and fall.

This wildflower naturally occurs in Wisconsin’s rich, moist woodlands and along streams or riverbanks. Plant Green Dragon in a location like where you would find it growing in the wild.

The foliage and corms of Green Dragon contain calcium oxalate crystals which are highly toxic, so mammalian foragers like deer or rabbits do not usually feed upon them. The fruit, however, is enjoyed by many birds such as wild turkey, Eastern wood pewee, red-breasted nuthatch, Ruby-crowned kinglet, and wood thrush.

Green Dragon prefers to be grown in dappled sunlight or light shade, but they can tolerate heavy shade. Green Dragon naturally occurs where the soil is rich, moist to wet, and preferably loamy. It needs consistent moisture during the growing period. It should be noted that this plant does poorly in heavy clay soil. A site that is full of decaying organic material is desirable. The leaves of trees make the perfect mulch which will help protect the plant from drying out.

The root system is a corm with secondary roots. A corm or bulbotuber is a thick, rounded, modified, underground stem base that bears membranous roots and buds – this acts as a vegetative reproductive structure for the plant. Small offset corms are formed once the original corm gets large enough; these eventually detach and grow on their own. This plant spreads by these offsets or by reseeding itself.

A benefit to the toxins within the stems, roots, foliage, and flowers of Green Dragon is that there are no insects that cause significant damage to the plant.

Green Dragon is susceptible to the fungal pathogen rust, Uromyces ari-triphylli. The fungus attacks the plant and produces spore-bearing, yellowish-orange bumps on the leaves and around the spathe. These bumps are known as pustules and reduce the leaf’s surface area and longevity. Once infected, this plant stays infected for life and can be spread by root to its clones but not by the seeds.

Suppose you notice this rust on your Green Dragon; fear not! According to a 1987 study, all this disease essentially does to your plant is reduce leaf size, and you may experience foliage dying back earlier than usual.

This is a very specific disease of little concern.

Green Dragon’s botanical name, Arisaema dracontium, can be broken down relatively easily to understand its meaning better and why it was given to this plant.

Arisaema is a combination of two Greek words:

The specific epithet, dracontium, is Latin for “of the dragon.” It comes from the Greek word ‘drakontion’, which is “small dragon.” This is because the protruding spadix resembles a dragon’s tongue or tail. It also resembles the northern star constellation, Draco (the dragon). In other botanical literature, dracontium was also said to refer to its foliage as it resembles a dragon’s claw, or some say it represents dragon wings.

Green Dragon often changes its sex midway through its life – in plants, this is called gender diphasy. When small and young, Arisaema dracontium is typically male; when larger, it becomes female; it may change sex yearly depending on environmental factors such as weather.

Remember that this plant is highly toxic. Green Dragon has needle-like crystals of calcium oxalate, often called raphides. These crystals become embedded within the mucous membranes of the mouth, lips, throat, and tongue. Consumption of this plant causes a slew of lovely side effects such as nausea, stomach, and intestinal distress, intense burning, stinging, and swelling in and around the mouth. It doesn’t just stop at that; symptoms in severe cases include choking, irregular heartbeat, falling into a coma, and even death. Despite fatality being highly uncommon in Green Dragon consumption, we don’t recommend eating this plant.

However, if you haven’t yet been deterred and are driven to eat a dragon? These crystals in the corm can be removed through slicing and prolonged drying over several months. Boiling or heating is also said to work, but there are many reports of this alone not being enough.

What is most often found nearby Green Dragon is its cousin, Jack in the Pulpit.