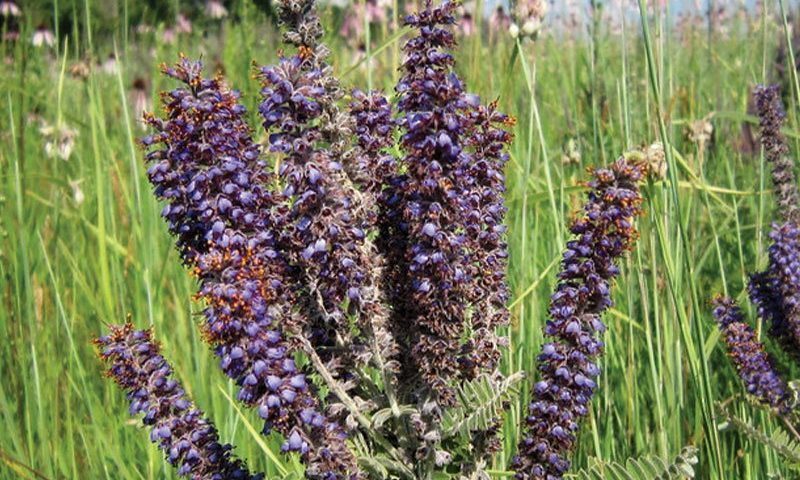 A Wisconsin native prairie plant, this wily perennial loves full sun. This is a resilient plant with a long taproot which makes it drought tolerant and great for an area with sandy, dry soil. The blue/purple flower racemes in later summer last up to three weeks. The compound leaves have one-inch-long leaflets and young stems that have small hairs, giving them a fuzzy appearance. As a bonus, this pea family perennial adds nitrogen to the soil. You may also know this plant as Devil’s Shoestring or Buffalo Bellows.

Leadplant is perfect for Wisconsin native wildflower gardens or for a space being naturalized into a prairie or meadow. It prefers moderate to moderately dry soil. Although tolerant of clay it does not like standing water. Leadplant also grows well in lean soils and so would be a great addition to rock gardens. Plant it on hillsides if erosion control is needed. If the soil is rich it will spread to create a ground cover.

Leadplant has a rather unkempt appearance, especially when not in bloom.

Leadplant attracts all manner of animals and pollinators with its flowers and foliage. The flowers attract many types of butterflies, bees, and wasps. A species of bee, Andrena quintiles, depends heavily on Leadplant. It’s the host plant to Dogface Sulphur caterpillars and several species of Underwing moths. Many grasshoppers, leaf beetles, plant bugs, moth larvae, and leafhoppers feed on Leadplant’s foliage. It’s also a preferred forage for deer and rabbits because it’s flavorful and protein-rich.

Leadplant takes some time to establish. Have patience! Initially, it may take 3-years to flower.

Water it once a week in the first year, being careful not to overwater as it doesn’t perform well in wet soil.

Leadplant is a great option for locations with lean soil. If being used as a ground cover then richer soil would better facilitate its growth and rate of spread.

Use a wire cage to protect it from deer and rodents in the early years until stems become woody.

Leadplant is easy to grow but the plant is tasty to rabbits, deer, and cows, as well as grasshoppers and leafhoppers. May need a wire cage to protect it in the early years until stems become woody.

It’s not affected by any major diseases. Occasionally affected by powdery mildew, rust, and leaf spots, but these are ornamental and should not seriously harm the plant.

There is conflicting information about the source of the common name “Leadplant.” Some say it’s named because people believed that the presence of Leadplant was an indication of lead in the ground. A belief that is, for the record, untrue. Others propose that its name is due to the silvery hue of the leaves.

Devil’s Shoestring is a reference to its tough roots, its ability to survive in harsher environments, and how it was difficult for settlers to plow land by hand.

The name Buffalo Bellows was used by Native Americans because Leadplant flowers at the same time that buffalos begin bellowing during the rut.

The presence of Leadplant in a prairie is indicative of a healthy, well-managed prairie. It would be absent in a prairie that was allowed to be over-grazed by livestock.

Prairie Dropseed Grass, Wild Quinine, and Switch Grass complement Leadplant in a landscape setting because they offset its unruly form. These options have a more definite, structured shape.