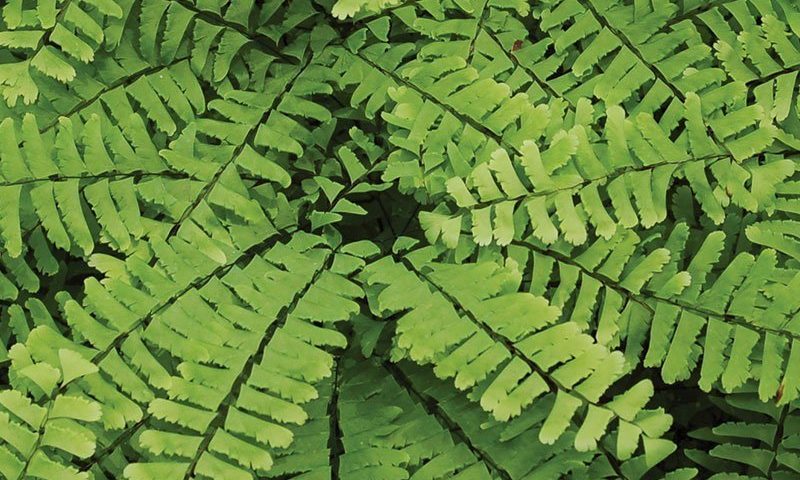 Maidenhair Fern is a maintenance-free, Wisconsin native perennial that can tolerate minimal sunlight and grow to cover a foot and a half of space. This delicate fern will give a woodsy yard a tranquil transition. The soft-green fronds land softly upon each other to create a carpet of ferns within the understory. Great for rocky sites or slopes that stay consistently moist throughout the year.

Maidenhair Fern is suitable for shady locations, easy to establish, and forms large colonies over time. The fern creeps slowly by rhizomes and can be contained by snipping unwanted growth or dividing the clump. The best use of Maidenhair Fern is in the shade of overhead trees or along the north side of a foundation. Adiantum pedatum can tolerate moist, under-lit conditions. This fern cannot tolerate dry conditions – it is better to err slightly too moist than too dry.

Maidenhair Fern is adaptable on slopes and areas in the woods that seem to be completely shaded. The brown-red stems of the fronds contrast nicely against the soft-green background it creates as the fern grows into its space in the Spring. Propagate Adiantum pedatum easily by dividing the rhizomes in spring.

Maidenhair Fern forms a dense clump of delicate fronds, producing the perfect shelter for toads and lizards, and other ground animals of the woods. It can also be a great hiding place for other mammals in the garden setting. This Wisconsin native will help our ecosystem stay in strong vigor with its partnership with wildlife providing shelter and serving as a food source. It may be used as protection or in nesting materials for a variety of songbirds.

After establishment, Maidenhair Fern doesn’t require much maintenance. Ensure the best success for this fern by keeping the soil moist. Brown spots on the leaves may indicate damage from the wind and/or sunlight. Providing a moist and shady location is best practice for preventing problems.

Maidenhair Fern doesn’t have many pest problems. Deer tend to avoid this plant as a food source and insects are generally not a problem. Any issues that arise are generally from the potential extensive growth from the shallow rhizomes. Alleviate this by clipping new growth as it appears, or completely fix the issue by dividing the rhizomes in the clump – spreading them out for less crowding.

The genus ‘Adiantum’ originates from the Greek word adiantos which translates to ‘unwetted’ in reference to the water-repellent foliage. The species ‘pedatum’ roughly translates to ‘cut like a bird’s foot portraying the orientation of the fronds.

Maidenhair Fern mixes well with other shade-loving plants such as Hosta, Helleborus, and Brunnera. These plants will also flower which will create a wonderful pop of color to the green carpet of ferns. Some taller accents that can be added to a moist, shade garden are options similar to Snakeroot (Actaea spp.), Goatsbeard (Aruncus spp.) or Spikenard (Aralia racemosa).