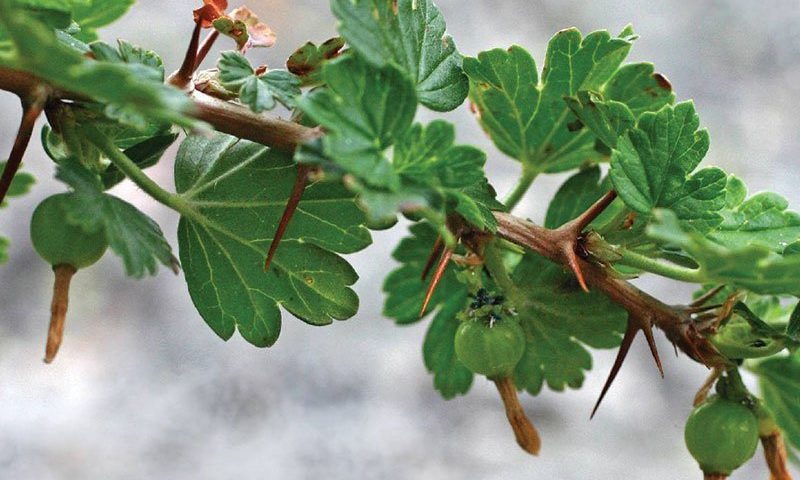 Missouri Gooseberry is an upright arching shrub with stout thorns that encompass the stems. This Wisconsin native can be found in our open woodlands, savannas, meadows, and woodland borders. Its white, hanging, trumpet-shaped flowers benefit pollinators, and the showy, agreeable fruit is enjoyed by humans and wildlife alike.

Missouri Gooseberry has stout thorns, edible fruit, and showy, hanging white flowers that appear solitary or in clusters. The fruit may be picked off the plant and eaten fresh or is often used in juices, syrups, jellies, preserves, and pies. Each flower, once fertilized, is replaced by a globoid berry approximately 1/3” across. The berry is initially green but ripens to a dull red or purple.

Because of the popularity of the fruit, gooseberry can be seen planted in vegetable gardens and bird gardens.

This shrub may also be used ornamentally as a specimen, groupings near a patio, a shrub border, or in native restoration projects.

The nectar and pollen of the flowers are a significant attraction to bees, including honeybees, bumblebees, cuckoo bees, and mason bees. Though less commonly seen around gooseberry, butterflies and clearwing moths are other floral visitors.

Caring for Missouri Gooseberry starts with planting in a proper location. This shrub can be grown in full sun, but its preference is partial sun. The plant may fail to produce flowers and fruit in the excess shade. However, it can grow well in different soil types and textures but prefers loamy or rocky soils high in organic material to retain moisture.

Gooseberry pruning is straightforward. The plant can become a tangled mess if allowed to grow unchecked. Cut back the shrub to allow additional airflow and sunlight to reach the center of the plant. This will help keep your gooseberry happy and healthy. In addition, prune out any dead or diseased branches. You might consider either the Thinning Cuts Method or “Haircut” Method of pruning.

Gooseberry tends to fruit heavier on branches between 2 and 3 years old. Therefore, it is recommended to prune out any shoots older than 3 to encourage the growth of younger branches and fruit production of branches in their prime.

White Pine Blister Rust is caused by an Asian fungus named Cronartium ribicola. This fungus was introduced into North America from Europe in the early 1900s. All North American white pines are susceptible. But don’t be fooled by the name; gooseberries aren’t off the hook. Alternate hosts of the disease include currants and gooseberries in the genus Ribes.

Contact an ISA-certified arborist for a disease identification and treatment plan if you believe your gooseberry, currant, or white pine has White Pine Blister Rust. We invite you to check out the Arborist For Hire lookup at the Wisconsin Arborist Association website to find an ISA Certified Arborist near you.

Gooseberry has a long and extensive history. For centuries, English horticulturists demonstrated impressive fervor over gooseberry growing and competing for their gooseberries against one another. Gooseberry clubs, or societies, were formed in England in the mid-eighteenth century but peaked during the mid-19th century.

When grown for their fruit, Gooseberries are often accompanied by beans, legumes, tomatoes, chives, or herbs such as mint and oregano.

If planted in a bird garden, it would thrive with other fruit-bearing natives, such as dogwood, serviceberry, Witherod Viburnum, Chokecherry, and Eastern Wahoo.