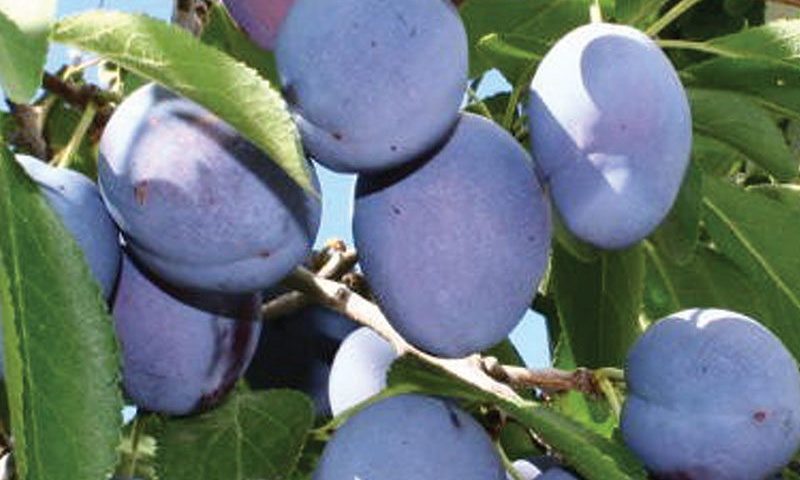 Mount Royal Plum is an heirloom plum variety that is extremely cold hardy. It is a European type prune plum that produces small to medium fruits that have blue skin, sweet yellow/green flesh and are round in shape. Unique as unlike most prune plums which are oval in shape. Known for producing very heavy yields.

Mount Royal Plum grows naturally into a nice open shape which makes it easy to prune by the home grower.

Plum curculio is a native snout weevil that attacks the fruit in late May-mid June in S.E. Wisconsin. Fruits damaged by curculio will normally ripen very early and drop off the tree well before the rest of the crop is ripe. Damage can be controlled by spraying an insecticide (if needed) in June to protect the fruit from curculio injury.

Black knot is a fungal disease that can infect plums and other members of the Prunus family. Fortunately, Mt. Royal appears to be far less prone to this disease than many other plum varieties. Eradication of the infected branches is the best way to control black knot should it occur.

Mount Royal Plum has a very interesting history. Mt. Royal plum originated in Montreal and was grown there by French settlers involved in the fur trade. The genetics of this Plum came from France either by plum pits or live trees brought to the new world which were used to develop this plum. Most likely by accident. While many of the original European plums and crosses made did not survive for long in this extreme cold climate, Mt. Royal was selected as it survived, thrived and produces very good fruit. In English the plum is called Mt. Royal. Montreal is French and means the same thing. I recently had an interesting chat about this with a former French Canadian who moved to Massachusetts. She had lived in Montreal and never realized Mt. Royal plum originated there. The city is named after a peak or hill. She tells me the area is now Mount Royal park and very beautiful to hike.

Mount Royal Plum is self-pollinating so only one tree is required for fruit. It is so prolific in fruiting that planting a 2nd tree would be absurd.