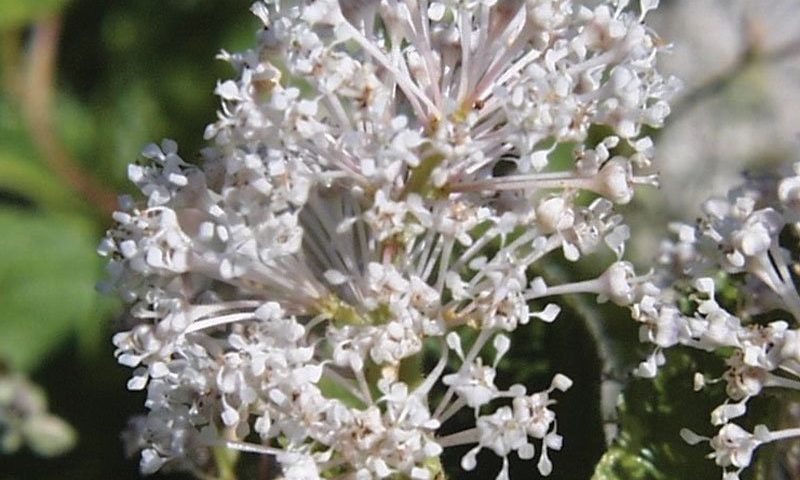 An attractive Wisconsin native sub-shrub for our prairies and open savannas. A blanket of white flowers in late June to July, and its attractive, deep green foliage makes this shrub sensational for mass plantings. A lover of full sun and well-drained soil, this shrub is a low maintenance and favored by wildlife in sunny, dry locations. The dried leaves make a rather tasty, caffeine-free tea. May also be known as Red-root or Mountain Snowbell.

Boasting woody and deep roots, New Jersey Tea is an excellent drought-resistant species useful for shrub borders, foundations, or mass plantings. Sites that are rocky, sandy, and sunny are going to allow this plant to thrive in locations where other plants wither away. It’s tolerant of juglone (Black Walnut Toxicity) and road salt – it can be planted adjacent to roadways and walkways that are salted in winter, making a quality choice for urban locations and smaller sites.

Ceanothus can be used as a sub-shrub in a restoration or prairie planting, as it tolerates both fire and being cut to the ground each year in spring. Its ability to fix nitrogen improves soil fertility over time.

With its dense form, fragrant flowers, and tasty leaves and twigs, New Jersey Tea benefits a wide range of wildlife. White-tailed deer and rabbits will nibble on the flowers, leaves, and twigs throughout the year. It is the larval host plant for Mottled Duskywing (Erynnis martialis), Spring Azure (Celastrina ladon), and Summer Azure (Celastrina neglecta) butterfliesand is a nectar source for monarchs. Learn more about how to attract monarch to your yard. It’s also a food source for native miner bees (Pseudopanurgus pauper and Pseudopanurgus virginicus). Goldfinches, house finches, and other birds are known to eat the seeds.

Dieback occurs naturally every year. Luckily, New Jersey Tea blooms on new wood and should be Rejuvenative Method of Pruning by cutting back to the ground in early spring. However, it can be left to grow naturally.

New Jersey Tea is extremely drought tolerant, but only when the roots are established. Ensuring the roots don’t dry out the first year is critical for the survivability of new plantings.

The most common issue that arises is root rot, occurring when the soils are not well-draining. Take care to not bury the crown or plant too deeply.

Deer are known to browse the plant (leaves, twigs, flowers) throughout the year. First-year plantings can be fenced off to reduce browsing potential and removed the following growing season.

Due to its extensive root system, successful transplantation can be difficult.

New Jersey Tea is found naturally throughout most of Wisconsin, but more common in the sandy, open soils in the southern and central parts of the state. When the seed clusters fully mature in fall, they split open to eject the seeds several feet.

The leaves can be used to make tea, which was used by the Colonists as a substitute for actual tea during the American Revolution, even though it contains no caffeine.

During buffalo hunts, when wood was scarce, Plains Indians would use the root as a fuel source.