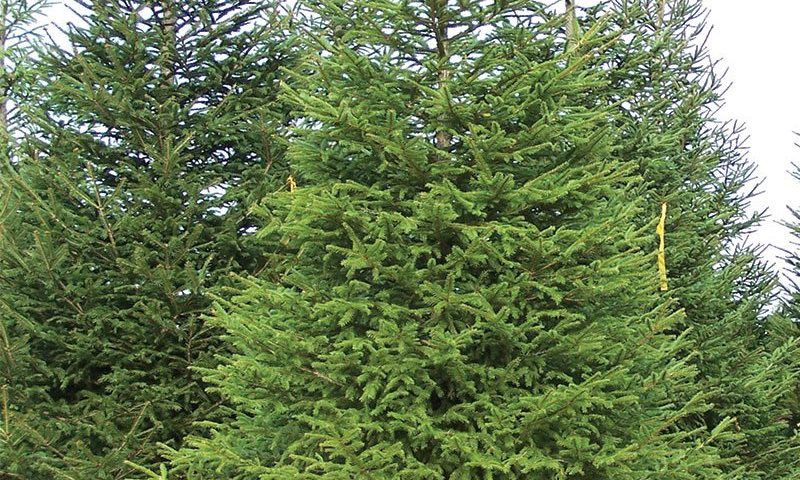 Norway Spruce grows rapidly when young, up to 3 feet per year! However, its large mature size must be considered when siting. This tree should be given plenty of room and is ideal for spaces needing a fast-growing screen. It is also somewhat resistant to glyphosate herbicide, making it suitable for use near agricultural land.

Norway Spruce are beautiful as a specimen tree and are also quite functional as a windbreak. When planted in multiples they can be a great way to define a property or create a screen.

This elegant spruce performs best in full sun and although it can survive in some shade, the form can become loose and gangly when in less than 6 hours of direct sun. For best results, be aware of available light when siting.

There are many cultivars (150+), from dwarf to weeping varieties, that can be used for different aesthetic and form needs. A few varieties that we offer include:

Although not native to North America, Norway Spruce provides cover to many avian species. Hawks, owls, and other birds of prey may be found roosting in the upper part of the tree. In a woodland setting, Norway spruce provides habitat to furbearing species like the threatened American Marten.

The rapid growth of Norway Spruce occurs in two stages: upwards then outwards. Because of this, a young tree may look awkward with a long central leader that has no lateral branching. While this may be unsightly in youth, do not shear the tree to improve its immediate aesthetics. This will damage the structure and form of the Norway Spruce. Their best performance is when left to grow naturally.

Established Norway Spruce trees are somewhat tolerant of drought but will benefit from deep watering when rainfall is less than 1 inch per week. Watering should be done at the base of the tree, directly into the soil. Avoid using an irrigation system that sprays the needles, as wet foliage is conducive to fungal and bacterial diseases.

Like all evergreens, Norway Spruce can suffer winter damage if fertilized incorrectly. Homeowners should avoid applying fertilizer in the fall as this may cause a new flush of growth that will not harden off for winter. A trained plant health care professional or arborist can advise how to best apply fall fertilization. Alternatively, a maintained mulch ring will slowly add nutrients to the soil, avoiding the need for fertilizer application.

Norway Spruce has no serious insect or disease issues. It is more resistant (but not immune) to Rhizosphaera needlecast than Colorado Blue Spruce and White Spruce. Occasionally, Norway Spruce can develop Cytospora Canker and Rust diseases. It can also be attacked by Spider Mites, Spruce Gall Aphids, and boring insects. These pests and pathogens typically present when the tree is already stressed. The best prescription for a healthy Norway Spruce is maintaining tree vigor with watering and mulch.

Norway Spruce performs best in full sun. Although it can survive in some shade, the form of Norway Spruce becomes loose and unsightly when it receives less than 6 hours of direct sun. Be aware of available light when siting this tree for best results.

Norway Spruce, like other spruces, is mostly deer resistant. Browsing may occur in periods of high pressure, but this is infrequent in Southeast Wisconsin.

Norway Spruce has long been prized for forest products for its strong wood and rapid growth rate. Its wood is used for structural lumber, paper production, and specialty products like tonewood for string instruments. Due to its high economic and cultural value, Norway Spruce was the first gymnosperm to have its genome sequenced. It is also a popular Christmas tree due to its heavy branching. Oslo, the capital of Norway, gifts a massive Norway Spruce to Edinburgh, London, and Washington, D.C. each year to be used as a Christmas tree. These 50-year-old trees are a symbol of thanks for Britain and the United States’ aid during World War II.

The value of Norway Spruce extends beyond wood products. The fresh shoots of the tree have long been used in traditional medicine to treat respiratory, skin, and gastrointestinal ailments. The resins are used for burgundy pitch, a component of many varnishes and medicinal compounds. Its needles were once used to brew spruce beer, both a treatment for scurvy and refreshing beverage. If you are interested in brewing your own, the following is an American recipe from 1796 (meant to use Red or Black Spruce):

Take four ounces of hops, let them boil half an hour in one gallon of water, strain the hop water then add sixteen gallons of warm water, two gallons of molasses, eight ounces of essence of spruce, dissolved in one quart of water, put it in a clean cask, then shake it well together, add half a pint of emptins (yeast), then let it stand and work one week, if very warm weather less time will do when it is drawn off to bottle, add one spoonful of molasses to every bottle.

Although not native to North America, Norway Spruce was brought to the continent by early settlers and has been naturalized in several Wisconsin counties. In the United States, the tree has been used to reclaim mine spoils and other disturbed sites due to its toughness.

One of the oldest trees in the world is a Norway Spruce. Named Old Tjikko, the surprisingly small 16 feet tall tree grows from a root system that is over 9,500 years old! The tree has persisted through resprouting and layering and is considered the oldest individual clonal tree. Old Tjikko was discovered on Fulufjallet Mountain, Sweden, by Professor Leif Kullman.

The seasonal needle drop of Norway Spruce will acidify the soil beneath. When selecting perennials for underplanting, use those that tolerate soil acidity and heavy shade. Some options include Solomon’s Seal, Delft Lace Astilbe, Wild Ginger, and Spikenard.