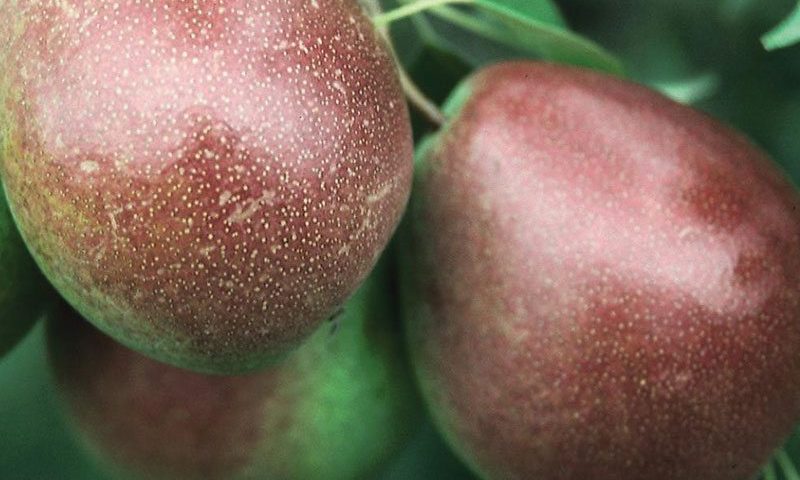 Parker pear was developed by the University of Minnesota and released in 1934. The fruits are medium-sized, green, and often develop a slight red blush on the sunny side of the fruit. While most pears need to be picked at the green/ripe stage and then slow ripened off the tree, Parker seems to be ok when picked fully tree-ripened as it does not have many issues with core rot like other pear varieties. Picking at the green/ripe stage is best as they will keep the longest when refrigerated.

We offer this variety on OH x Farmingdale 333 rootstock which is semi-dwarf. With proper pruning, the tree can be kept to a height of 15′. Like all pears, this variety tends to grow in a very upright form.

Due to the high susceptibility to fireblight, pears should only be pruned when dormant (winter-early spring) unless one is pruning out existing fireblight damage (spring) to prevent it from spreading further.

The major issues with pears in Wisconsin are fireblight and plum curculio. Fireblight is caused by bacteria. This disease primarily shows up in spring with cankers on the tree or rapidly wilting and dying branches (affected leaves wilt and turn black in 24 hours). Any forms of wilting and dying branches or cankers on older wood need to be pruned out as soon as they are found. Sterilize pruners or saw blades between cuts with a bleach solution (1 part bleach & 9 parts water) to prevent the spread of the bacteria.

Plum curculios are native snout weevil that attacks young pear fruits in June and attempt to lay eggs in the fruit. While usually unsuccessful, the affected fruit will develop with a dimple on the skin but the flesh underneath will stay hard and gritty even when the fruit ripens. Best controlled by spraying an insecticide from petal fall-mid June in S.E. WI.

Excellent hardy pear for Wisconsin and other northern growing regions.