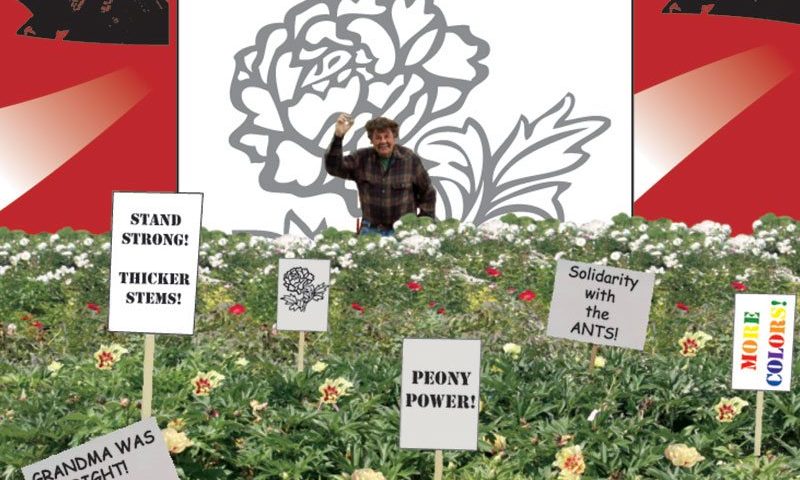 The founding of the United States of America, the crumbling of the Berlin wall, and last year’s Arab spring, were all revolutionary upheavals in the world that led to changes of monumental importance. A similar revolution has been occurring in the Peony world for the past 25 years. Yep, Peonies, those renegades that used to be associated with grandmas everywhere are now causing a wonderful ruckus that is changing how we see the world. You see, Peony beauty has gone from fabulous to stupendous in a relatively short period of time. It’s truly revolutionary!!!

The most common type of peony, the herbaceous peony, has a new look. They have stronger stems that don’t flop over as readily as they used to. Unusual flower forms and smaller plant sizes have all come about recently. The new coral pink flower colors are spectacular!

Tree peonies, which are woody shrubs produced by grafting onto herbaceous roots, have more flower colors than ever before. There are now even more amazing, true reds and peach colored cultivars, as well as, flowers with dramatic grape purple eyes. To top it off, many of the new tree peonies have improved hardiness.

Perhaps the most revolutionary of all peony developments has been the breeding of intersectional hybrids a.k.a. Itoh hybrids. These crosses between the tree peony and the herbaceous peony have brought us plants with a wide range of flower colors. They have peach, yellow, and orange colors in their flowers and are absolutely stunning! The plants are herbaceous in form and much easier to grow than the traditional tree peony.

Another major innovation in recent years is the availability of large blooming peony plants in containers. No longer are peonies only available as bareroot divisions or in #1 container sizes with a few struggling shoots popping out of the pots. Blooming plants are now available in large #5 containers that add instant impact to the landscape. This is a major improvement in peony growing and marketing.

The upper Midwest is a major area for the production and development of peonies. Two local people who are revolutionaries in this regard are Roy Klehm and Roger Anderson.

Roy, who is a fourth generation nurseryman from the famous Klehm family of Barrington, Illinois, has been responsible for introducing countless peony cultivars, some of which are amazing breakthroughs in the development of the genus. His ‘Coral Charm’ was the first true coral-peach colored herbaceous peony. Roy has helped numerous breeders get their plants into the market by supporting their work and introducing the plants through his nursery. The biggest part of our peony inventory is Roy’s introductions. I don’t know if he’s a George Washington of the peony world but certainly a Ben Franklin.

Roger Anderson of Fort Atkinson, Wisconsin is a world renowned Intersectional peony breeder. His fabulous yellow peony, Bartzella, developed in 1986, is just now becoming available in garden centers. You can see much of Roger’s work by visiting The Roger F. and Sandra L. Anderson Intersectional Peony Garden at the Hoard Historical Museum in Fort Atkinson.

Growing intersectional and herbaceous peonies is relatively easy if you just pay attention to a few things. They need full sun in order to bloom their best. Plant them in well drained soil, as they may be subject to rot diseases in poorly drained sites. Fertilizer should be used sparingly. If you fertilize too much they will bloom less. A light application of slow release fertilizer after the plants have bloomed is adequate. This only needs to be done about once every three years. Peonies are usually disease-free, although they can be subject to botrytis blight in cool, wet springs. Signs of this disease are: stems tipping over or the blackening of flower buds. The damaged areas should be cut out and thrown in the garbage to prevent re-infection in ensuing years. Never put the infected debris in your compost pile. You can help prevent disease in herbaceous and intersectional types with a good garden clean-up every fall. After frost, cut the stems to the ground and remove them from the garden.

Tree peonies require similar cultural parameters. They differ from herbaceous ones in that they should be mulched heavily going into winter. A 3” to 4” layer of material over the root zone will help delay them from pushing new growth too early in the spring. Tree peonies should not be cut down to ground annually but rather be grown like a shrub and be renewal pruned after blooming as needed. In addition, tree peonies may benefit from a slightly more acidic soil, as manganese tie-ups may cause nutrition problems in some varieties. When planting, make sure the graft union is 2-3 inches below the soil surface to allow the plants to develop their own roots rather than solely relying on the grafted herbaceous root for its sustenance.

And what’s with the ants all over peony buds? Myth says that the peony needs the ants to help open the buds to reveal the magnificent flowers. This is not their purpose though it is a good tale. The real story is ants go to the peony buds to eat a sweet exudate, glucose that develops on most varieties. If you don’t want the ants to come with when you cut flowers to bring into your house, you can dip the buds and flowers in a bucket of water to release the insects. Now if you have ants in your house already, like I do, you don’t bother!

Peonies are great! They really are. Let’s support our local revolutionaries and make our grandchildren proud that we are part of the great peony uprising of the early 21st century.