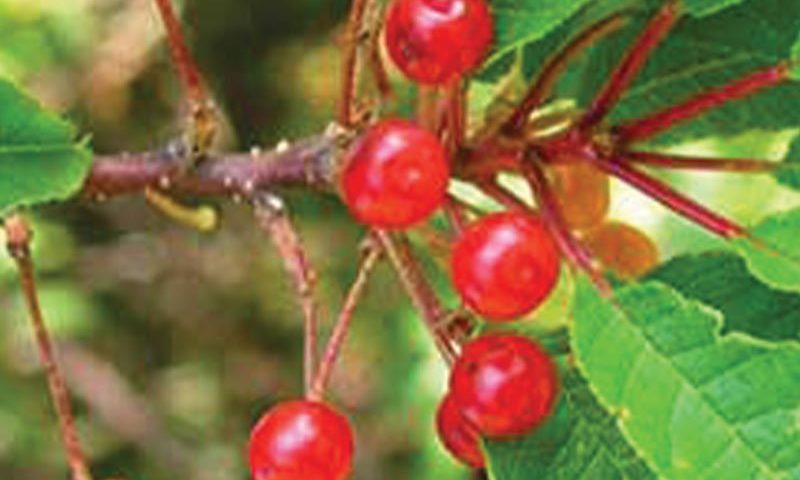 Pin Cherry is a Wisconsin native tree and a rare find in the nursery trade! Perfect for a bird garden, reforestation, or naturalization project, its bountiful shiny red drupes are a favorite of many varieties of wildlife, especially birds and pollinators. With graceful frond-like leaves, white flowers, fiery fall color, and attractive exfoliating bark, Pin Cherry checks all the boxes for four-season interest. This small but mighty tree is a reforestation workhorse in the wild and will add beauty, diversity, and balance to any native planting.

You may also know this plant as Bird Cherry, Fire Cherry, or Wild Red Cherry.

Pin Cherry is known by many names, including Bird Cherry, Fire Cherry, and Wild Red Cherry. It is a Wisconsin Native tree that suckers to form thickets. Pin Cherry can be found in disturbed areas, dry areas, along woodland edges, and in the forest understory – interestingly, however, it is intolerant of shade. The seeds can remain dormant for many years in the forest floor (according to some sources, up to 150 years!). Pin Cherry will be the first species to dominate when the forest canopy opens after a fire, clearing, or storm. This has given rise to the common name Fire Cherry.

Fire Cherry is integral in the reforestation process and is an important food source for a plethora of wildlife. Pin Cherry is critical for nutrient retention and erosion control during the reforestation period, due to its fast growth rate and early succession. It supports the ecosystem like a champ during its short lifespan, usually 20-40 years. During this time, it colonizes into thickets that provide shade for other species of trees to repopulate the forest. Once the slower-growing shade-tolerant species have gained their strength, the Pin Cherry will die off to allow these species (Birch, Aspen, Maple, Black Cherry, Beech) to dominate the forest once again.

A wildlife and bird-lover’s dream, Bird Cherry is right at home in a woodland garden, restoration planting or naturalized area. Pin Cherry attracts a host of birds, animals, butterflies, and other pollinators. It is fire-resistant. A sturdy upright tree with shallow roots, Wild Red Cherry does well in sandy or dry soil. Pin Cherry will colonize, both by suckering and through its extremely hardy fire-resistant seeds. It is best used in an area where this thicket-forming habit is desirable or acceptable, however, suckers can be controlled by removing them if a single stem tree form is desired. Due to its short lifespan, Fire Cherry is best used in combination with young slower growing trees that will eventually shade out and outlive the hard-working, fast-growing Pin Cherry that will prepare the site for the larger trees to thrive throughout the years.

Pin Cherry is truly a plant with four-season interest. In spring, dainty white buds begin to pop as tender young leaves emerge in shades of pink to green. Soon after, fragrant white flower clusters take the stage, giving way in summer to bright green lanceolate foliage with rounded teeth, creating a frond-like effect as the leaves cascade from the slender branches. Later in summer the bright red drupes (cherries) hang in clusters, enticing birds and humans with their juicy shine. The bark is beautiful – young twigs pop with an orange sheen and prominent lenticels. As the tree ages, the bark turns a shiny reddish-brown with horizontal lenticels and exfoliates in strips.

Many mammals also eat the fruits, and grouse will eat tender young buds. Deer will browse twigs and foliage. However, it does not have a high nutritional value for them, so they tend to leave it alone.

Pin Cherry is host to a myriad of larvae and caterpillar species – see the Pests section for details. The majority of these “pests”, however, do not seriously affect the health of the plant and are highly beneficial to wildlife! Between the creepy crawlies and the bright red cherries, birds can’t stay away from this all-you-can-eat buffet.

Wild Red Cherry tolerates occasional drought, dry sites, alkaline soil, and will form thickets and become shrub-like if suckering is not controlled. It must have full sun and well-drained soil.

Thickets can be pruned using thinning cuts method and dead wood removed to improve airflow. Prune Pin Cherry in late winter or early spring (prior to bud break) to avoid ‘bleeding’ which is common to the Rosaceae family. The sap will run and leave black streaks on the bark if pruned in fall or too early in spring.

Like most members of the Rosaceae family, Pin Cherry is susceptible to the fungus black knot, as well as a host of other diseases and pests. These include cherry leaf spot, powdery mildew, and rusts. Most of these are cosmetic – with a short life span and a tough disposition, Pin Cherry can handle what nature throws at it.

Leaf feeders, tent caterpillars, cherry leaf beetle, sawflies, fall canker worm, Bruce spanworm are some of the pests that may inhabit and feast upon the Pin Cherry. Birds, in turn, feast upon many of these delectable larvae!

Fruits are edible and can be used in jams, jellies, and syrups. However, all other parts of the plant including bark, flowers, stems, and leaves are highly poisonous to humans and animals if ingested. These parts of the Fire Cherry plant contain amygdalin, a cyanogenic glycoside. Amygdalin occurs in many plants, notably in the seeds of many plants in the Prunus genus. Ingesting large amounts of these seeds, or any of the above-listed plant parts of Pin Cherry, can cause cyanide poisoning and could possibly be fatal.

The inner bark of the Wild Red Cherry served multiple medicinal purposes for Native American tribes. It was made into an infusion to treat pain, cough, bronchitis, blood disorders, and infections. The roots have astringent properties and were used as a compound to treat burns, sores, ulcers, and as a decoction for indigestion. Fruits were gathered and eaten fresh, or dried – some tribes prepared them mashed, formed into cakes, and the cakes dried for future use – to be reconstituted for cooking, or taken as a source of nourishment during hunting expeditions. (BRIT – Native American Ethnobotany Database)

There are many options for companion plants, depending on the site conditions and desired effect.