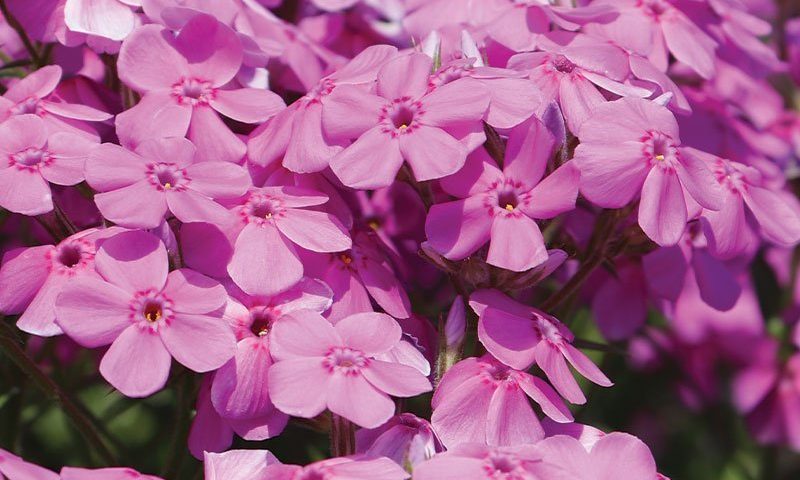 The German horticulturist Karl Foerster once wrote: ‘Life without phlox is a mistake.’ With their adaptability to many habits, fragrances, and color varieties, Phlox can find a home almost anywhere. More specifically, Prairie Phlox (Phlox pilosa) are easy-to-grow, low-maintenance perennials that flourish in full sun. Native to Wisconsin, Prairie Phlox is reminiscent of an intimate cottage garden with its sweet fragrance and delicate blossoms that seem to vibrate with pollinator activity. You may also know this plant as Downy Phlox or Hairy Phlox.

Growing relatively quickly and reaching 18” in height, Prairie Phlox can range in color from pink to pale purple, blooming for three to four weeks in summer. Prairie Phlox love sunny locations and are exceptional when used in rock, cottage, cut flower, and pollinator gardens, or in meadow and prairie restoration projects.

Prairie Phlox bloom profusely in full sun in dry to moist, well-drained soils. A mid-height plant, Prairie Phlox looks wonderful nestled amongst ground-hugging perennials or set against a backdrop of taller plants and ornamental grasses. Their bright color contrasts nicely against shrubs such as Spirea, Cotoneaster, and Bush Honeysuckle, or when strategically planted amongst evergreens in a mixed-bed approach. Even after the end of their flowering period, the leaves of Prairie Phlox serve as a backdrop for other flowering plants, including lower-growing annuals.

Prairie Phlox makes a nice cut flower; however, it’s best to cut them just as they reach peak bloom to prevent floret drop as much as possible.

Prairie Phlox flowers are shaped as a result of a symbiotic relationship with butterflies. Flat and wide petals act as a landing pad while the narrow corolla tube in the center of the flower is ideal for long tongues withdrawing nectar. Butterflies and skippers, drawn by the intoxicating scent of Prairie Phlox, include Monarchs (Danaus plexippus), American Painted Lady (Vanessa virginiensis), Sulfur butterflies (Coliadinae spp.), Swallowtail butterflies (Papilio glaucus), Cloudywing skippers (Hesperiidae spp.), and Clearwing moths (Hemaris thysbe). Learn more about how to attract monarch to your yard.

Prairie Phlox is a larval host plant for Phlox moths (Schinia indiana), who feed on the flowers and developing seeds.

Rabbits, deer, and groundhogs have been known to eat the foliage.

Prairie Phlox are unfussy and relatively low maintenance. They do prefer moist soil and should be watered regularly – more in drought periods to prevent leaf drop. To maintain an even moisture level, Prairie Phlox can benefit from a light mulch in spring.

Spreading easily via rhizomes, some removal may be required to prevent dispersion into unwanted areas. Spent flowers can be cut back to maintain a neater appearance.

Prairie Phlox can often be confused with other species in the genus or with the invasive look-alike, four-petaled Dame’s Rocket (Hesperis matronalis) of the Brassicaceae family. Five flower petals, hairy stems and leaf margins, and narrow lower leaves are markers of Prairie Phlox. Dame’s Rocket should be pulled and disposed of following County guidelines.

No serious insect or disease problems. While Prairie Phlox has good resistance to powdery mildew, proper spacing increases air circulation and helps prevent issues. Spider mites can sometimes be a problem in hot, dry conditions, but you can prevent this by ensuring a consistent moisture level throughout the growing season.

The genus name phlox is derived from the Greek word for “flame.” Also known as a “flame flower” the shape of the phlox flower is compared to that of a torch. Mythology says that phlox flowers were created from the flaming torches used by Odysseus and his men, to light their way into Hades. Once they emerged, torches were thrown to the ground and became phlox flowers, in honor of Odysseus’ bravery. The specific epithet pilosa means “hairy” and refers to the soft white hairs on the stems, leaves, and corolla tubes.

In many flower language references, Phlox in general symbolize the union of souls, love, companionship, or sweet dreams. In Victorian times, a bouquet of Phlox often indicated a public declaration of love or a marriage proposal.

Meskwaki Indians used an infusion of leaves to cure and purify the blood, and as a wash for eczema. They also used a compound containing the root used as a “love medicine” although it seems that over time, its specific use in this regard has been lost.

Combine with other sun-loving native perennials such as:

Prairie Phlox makes a great filler plant when tucked between low growing perennials such as:

And taller plants such as:

When their blooms fade, the remaining foliage will act as a groundcover keeping weeds at bay while also filling out between other plants.