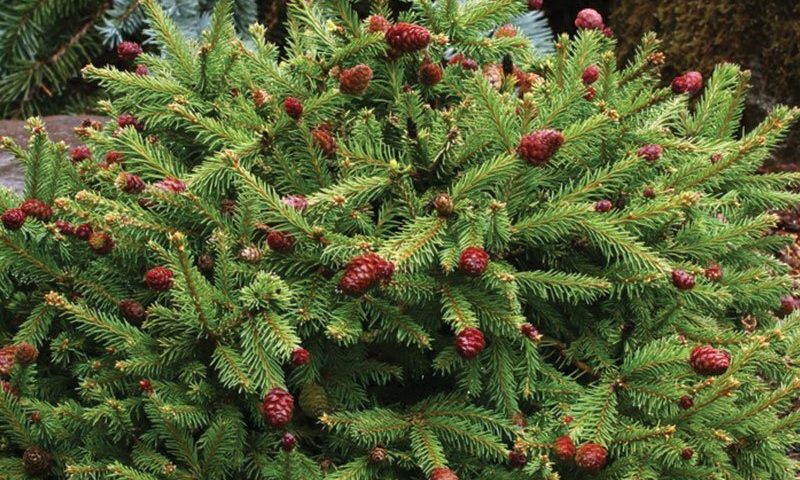 Pusch Dwarf Norway Spruce is a small, unique, slow-growing conifer that works well as a creative accent addition to rock, Zen, and contemporary gardens. It introduces year-round interest to the landscape or garden with its dense needles and precious purple cones.

Pusch Norway Spruce is a very low-maintenance conifer for dry to moist sites with at least four or more hours of direct sunlight. A small statement plant within conifer gardens or nestled amongst perennials in a flower bed, interesting purple cones create appeal for visitors to look at while walking the garden.

This spruce serves mainly as a nesting area for birds. While the overall benefits to wildlife are slim, the shelter and shade provided by the dense plant will be home to many species over the course of the season.

The care of Pusch Dwarf Norway Spruce is simple. Consistent moisture, good drainage, and direct sunlight are essential for the success of this interesting conifer.

Pusch Dwarf Norway Spruce has few pest problems. Fungus may arise from moisture between the dense needles, which may attract other pests or diseases. Avoid potential problems by watering at the base of the plant instead of through the foliage.

There are many options that could be used as companion plants with the Pusch Dwarf Norway Spruce. For instance, pairing with lower evergreens such as an Everlow Yew creates a nice foreground while larger evergreens like Arborvitae and Junipers create an attractive background.