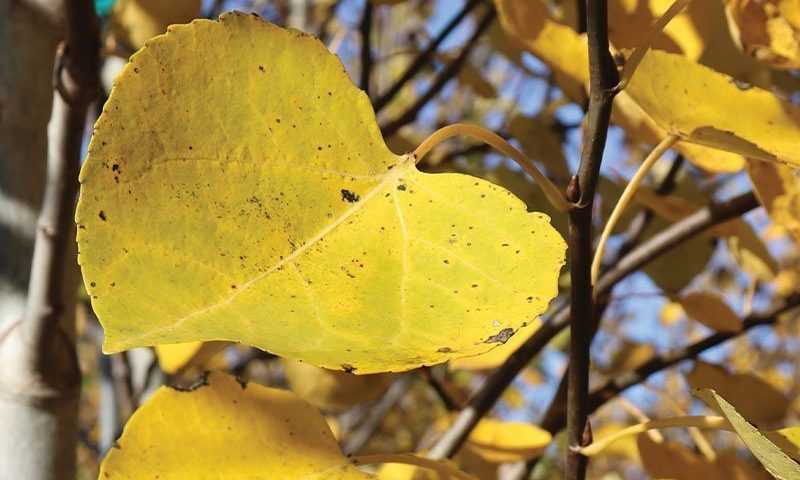 Quaking Aspen is a fast-growing, narrow-oval to pyramidal, Wisconsin native tree with lustrous dark green foliage that shimmers in the slightest breeze. This pioneer species is quick to colonize open spaces, especially where there is bare soil. Its creamy white bark and rapid growth make a striking contrast to evergreens where Paper Birch will not grow. In fall, the foliage turns a beautiful golden yellow. An excellent adaptable species where it has room to grow.

As Quaking Aspen will spread through root sprouts (suckers) over time, it should be planted where there is room to grow or in masses. While suckering can be moderated through some cultural tricks (more on that in the Maintenance section), it should not be planted in narrow street terraces or within 10 feet of above-ground and below-ground structures. It is also shade intolerant, so don’t plant it where there is heavy light competition from other trees or where structures will keep the plant in shade most of the day.

Best performance is found in sites with organically rich, well-drained, loamy soils that are high in calcium, nitrogen, potassium, and magnesium. However, Quaking Aspen is quite adaptable so long as the soils aren’t droughty and the plant is not shaded by other trees.

Quaking Aspen can be planted singly or in groups, and we carry both multi-stem and single-stem plants. Individual trees make a bold, upright statement, while grouped plantings lend a more natural look to a planting. The choice is yours!

Quaking Aspen is tremendously valuable to birds, insects, mammals, and more. It supports the larvae of the Great Ash Sphinx, Eastern Tiger Swallowtail, and Viceroy butterflies as well as a whole host of other insects. Aspen is also high value for our native Ruffed Grouse, which requires aspen of all age classes for habitat. In western states, the young sprouts are a food source for elk and moose. In fact, prior to the reintroduction of wolves to Yellowstone, there was a severe decline in Aspen regeneration as all the young seedlings were being eaten by elk. Once wolves were brought back to the park, however, there was a resurgence of Quaking Aspen as they were allowed to grow beyond small sprouts.

Like all trees, keeping the area around the stem mulched will help retain moisture, provide nutrients, and keep the tree happy for years to come. Weekly or bi-monthly watering when temperatures are hot will aid in plant establishment and prevent drought stress. However, overwatering should be avoided.

As deer are especially fond of scraping their antlers on Quaking Aspen trunks, you should always plan on using trunk protectors from Halloween through Memorial Day. I’ve seen trees up to 8 inches in diameter damaged by bucks, so don’t think you’re safe just because your tree is larger!

There is no way to guarantee your Quaking Aspen will not produce suckers. And if anyone tells you they’ve got one that won’t, then I’ve got a bridge in New York I’d like to sell you. However, if we understand how suckers are produced, we can reduce the frequency of them occurring. We can also use this information if we want to increase sucker production- maybe we’re managing a wetland or transitional area where we want Aspen to colonize, or maybe we want to mimic the vast stands of Colorado. Either way, it’s about managing hormones in the plant.

Suckers are produced when there are more Cytokinins (hormones produced at root tips) than Auxins (hormones produced at shoot tips). These hormones flow throughout the plant normally, and when there are enough Auxins sent to the roots from the growing shoots, the formation of suckers is suppressed. However, when that flow is interrupted by mechanical damage to the trunk, then Cytokinins begin to accumulate in the roots, forming suckers. So that leads us to rule #1: don’t cut the tree down or damage its bark!

Hormones are also affected by environmental factors, which leads us to rule #2: Keep the soil cool! High temperatures degrade Auxin hormones and promote the production of Cytokinins. If soils around the root system are kept cool, this helps the Auxin neutralize the Cytokinins. But if the soil around the tree is hot, then congratulations! You’re going to have more suckers.

To summarize, if the buds aren’t connected to the roots and soil temperatures are high, then you have more suckers. If the tree’s stem tissue is healthy and the soils are cool, you’ll have significantly reduced sucker production.

Quaking Aspen is a high-value tree to wildlife, so it is impossible to avoid some damage from insects or animal browsing. There are very few diseases that are fatal for Quaking Aspen, and the diseases that are fatal are not able to be treated. Canker, rot, and insect damage are all facts of life that will be seen on the tree at one point or another. And if you have an Aspen die from, say, Hypoxylon Canker, it’s time to plant something different.

Quaking Aspen is the most widely distributed tree species in North America, ranging from Alaska to Colorado, and east across Canada to New England. The range of Quaking Aspen is restricted to areas where annual precipitation exceeds evapotranspiration. In layman’s terms, this means they grow best where there is a surplus of soil moisture. Its wide distribution also lends Quaking Aspen many names: Trembling Aspen, Trembling Poplar, Mountain Aspen, and Golden Aspen. You’ve likely heard it referred to as Poplar or Popple, but these names are also used as general terms for any Aspen species or member of the Populus genus.

So why do we call it Quaking Aspen? It’s because of how the foliage shimmers in the slightest breeze. This is due to two attributes of Aspen’s leaf- its shape and color. The underside of the foliage is a lighter, pale green, while the upper side is dark, lustrous green. When the foliage moves from side to side, the two-tone effect is amplified, and the motion can be seen from a great distance. But how does the foliage flip back and forth? The secret is in the petiole shape. On the leaves of most plants, the petiole (or leafstalk) is usually rounded and attaches to the base of the leaf. On Aspen, however, the petiole is more of a flattened oval shape and is arranged perpendicular to the leaf. This makes it sturdy and resistant to movement up and down, but weak when it comes to rotational movement.

A better question is why do the leaves quake? This has yet to be answered, but some hypothesize that the leaf movement prevents solar damage at higher elevations- think of it like how you get sunburnt out in the open but not under a tree, even though sunlight pokes through the canopy. Another hypothesis is that the movement deters insect predation of the foliage, or at least makes it more difficult for bugs to munch on them. More research is needed to determine if these benefits are what caused the foliage to evolve in this way, or if there are additional reasons yet unknown.

Quaking Aspen has numerous cultural uses. In Wisconsin, it is commonly used as pulpwood for paper production, but the wood can also be used to make plywood and OSB, lumber, and even veneer wood. It is especially useful for outdoor furniture (play structures, benches, etc.) as the wood surface does not splinter. It can also be used to make Excelsior-no, not Stan Lee’s catchphrase- a type of wood shaving used in packaging. In western states, it is used as forage for sheep and cattle. Due to its fast growth rate, the species is also being evaluated for use as a biofuel or to make into processed animal feedstock.

Did you know that the oldest, largest, and heaviest organism on the planet is a stand of Quaking Aspen? It’s called Pando and it lives in Fishlake National Forest in Utah, occupying 106 acres. That’s about 1/8th the size of Central Park or a little over 80 football fields. It is estimated to weigh over 6,600 tons- or 55 blue whales (at 115 tons each, they’re the heaviest mammal), if that’s your preferred measurement. While the individual trees are of varying ages, the root system is conservatively estimated to be over 80,000 years old. Some estimates believe the colony could even be millions of years old! So the next time someone tells you that Aspens are a short-lived tree, you’re only hearing half the story.

Native companions to Quaking Aspen are numerous due to its wide range. In our region, it is commonly found growing with White Spruce or in pure stands (no other tree species present). Understory tree and shrub companions are many, so I’ll only name groups for the sake of brevity: Willows, Dwarf Bush Honeysuckle, Dogwoods, Serviceberries, Cherries, Elderberries, and Snowberries. Redosier Dogwood is an especially beautiful companion as its red stems contrast with the white bark of Quaking Aspen in the winter months. Perennials include Largeleaf Aster, Spikenard, False Solomon’s Seal, Yellow Beadlily, Goldenrods, Sedges, and several native ferns including Sweet Fern, Lady Fern, Bracken Fern, and rarely Maidenhair Fern.