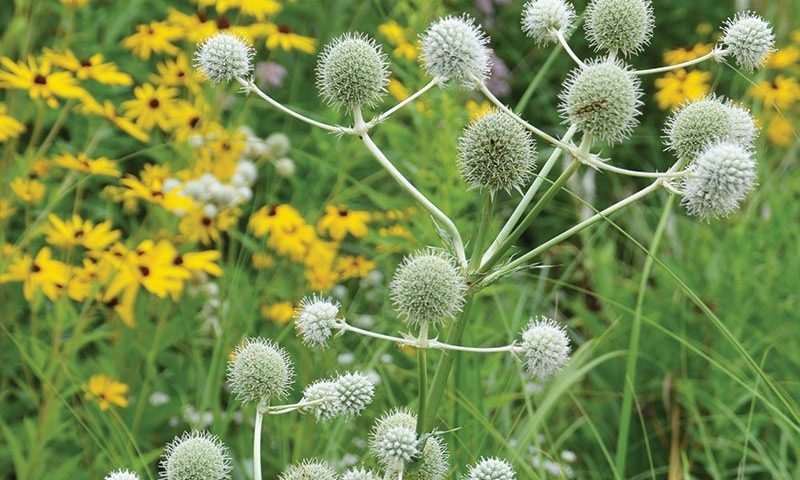 If you have ever been walking through a Wisconsin prairie and seen a patch of Rattlesnake Master then you know what I mean when I say this plant is a bit of an oddball. It looks like nothing else in our landscape and more like something you would find in the desert Southwest. The foliage is reminiscent of the Yucca plant with fibrous, toothed leaves sometimes up to 30 inches long. The flowers grow multiple round, compact inflorescences on a long stalk. Frankly, they look a bit like golf balls or funny-lookin’ thistles. This unique, native perennial is sure to add excitement and interest to any landscape bed or garden. But be ready for people not to believe you when you say it’s native!

Rattlesnake Master is drought resistant due to a long taproot but can also thrive in moist soil. Be sure the planting location is well-drained as it does hit its limit when planted in an area with standing water. Plant this puppy in full sun as it tends to get lanky in part shade, leading to drooping flower stalks.

Rattlesnake Master attracts many pollinators. Monarchs, Skippers, bees, wasps, and flies are attracted to the nectar. Soldier beetles eat the pollen. The caterpillars of yet another moth, (Coleotechnites eryngiella) feed on the seeds.

Rattlesnake Master Stem Borer (Papaipema eryngii) is an endangered specialist moth that uses Rattlesnake Master as its only host. Eggs are laid near the roots and hatch in May, the larvae wriggling underground toward the roots. There they live and feed on the roots until late August when they finally pupate. They emerge in the fall as moths, laying eggs (sometimes up to 200 in one go!) that will overwinter, and the cycle begins again. It’s restricted to the central United States and is only found in areas with Rattlesnake Master populations large enough to support the larvae. An estimated 100-1,000 individual plants are required for them to thrive. Rattlesnake Master is commonly found in mature, undisturbed prairies. While there are likely other factors contributing to the borer’s decline, the loss of these prairies to development is likely the main cause.

Mammals (including deer!) tend to avoid the foliage.

Avoid transplanting as this will damage the taproot and it will likely not survive.

Do not fertilize. This may result in too-fast growth, creating a floppy flower stalk.

In some cases, Rattlesnake Master can grow large enough that the flower stalks flop over. To help prevent this, plant it in full sun and surround it with native grasses as the competition may keep it from growing too tall.

No foliar diseases or pests.

Rattlesnake Master is a part of the carrot family (Apiaceae), another aspect of this plant that makes it stand out, as it is difficult to find the visual similarity between this, and, say, parsley, although, when the leaves are crushed, they do emit an Apiaceae-like scent. The Black Swallowtail, which uses plants from the family Apiaceae as a host, has been observed to feed on Rattlesnake Master leaves, though it must be stated that it seems to prioritize other species from the carrot family.

Historical Uses: The roots and shoots can be cooked and eaten. The dried seed heads were used as rattles by Native Americans. The fibrous leaves are still used by Native Americans and modern survivalists to make cordage with endless uses, including a few sandals, baskets, and rope.