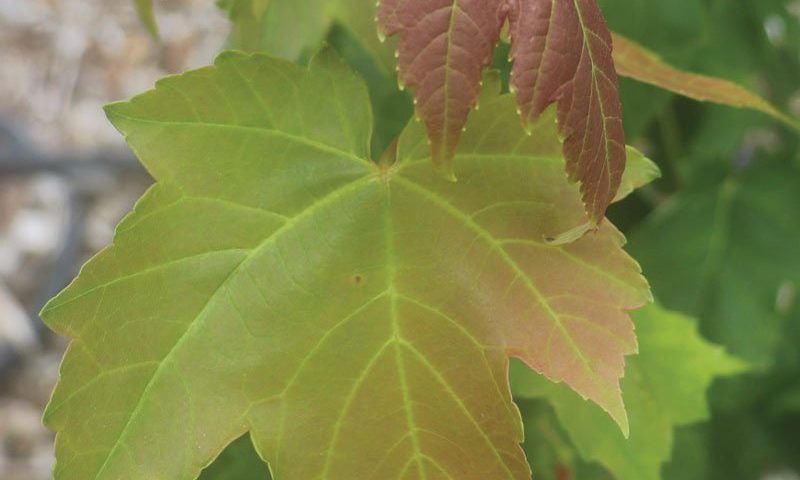 Red Maple is a Wisconsin native tree with red fragrant flowers that are among the very first to bloom in the spring. Decorative red samaras appear on female trees shortly after. Emergent leaves, petioles, and twigs are all red or reddish. The fall color is also often a bold red. This tree has been planted in many a front yard and along many a street, and for good reason.

You may also know this tree as Scarlet Maple, Soft Maple, or Swamp Maple.

This is a common street tree as it adds color, grows quickly (only surpassed by silver maple), and adapts to many soils.

This tree has multiple seasons-interest which lends to its use as an ornamental tree or a specimen tree. Dense foliage and good clearance make it a good shade tree. As a plus, it can also be used to naturalize an area as it is native and does benefit wildlife.

Plenty of animals make use of this Wisconsin native tree. White-tailed Deer browse the stump sprouts through the winter. Moose and elk also browse though not as heavily. Squirrels will chew on bark, twigs, buds, and leaves and use these parts as nesting material. Juncos, nuthatches, turkeys, and other birds will eat the seeds.

As one of the first plants to bloom in the spring Red Maple kick-starts the year for many native bees and honeybees. Rosy maple moth, Cecropia Moth, Retarded Dagger Moth, Polyphemus Moth, the Imperial Moth, and more use it as one of their host plants. Inchworms, Orange-humped Maple Worm, Maple Looper larvae, and more feed on the foliage.

Many cavity nesters such as Pileated Woodpecker, Screech Owl, and Wood Duck will use cavities.

Toxic to cattle and horses.

Red Maple has a shallow root system. Give plenty of clearance to prevent it from uprooting sidewalks, walkways, and foundations. There are also several pathogens that can infect a Red Maple if the trunk or shallow/exposed root is damaged by lawnmowers, etc. The roots are not only shallow but dense and often crowd out vegetation near the trunk. For these reasons, it would be best to simply make a large mulch ring around the base as it would protect the trunk and cover the bare ground beneath.

Canker and root rot can occur on damaged trunks. Fungal leaf spots can occur. It can get chlorotic if planted in alkaline soils due to a lack of manganese.

Aphids, leafhoppers, borers, scale, and caterpillars can all affect foliage.

Red Maple is a soft wood. Wind and ice can break branches.

Due to their dense, shallow roots, the best thing would be to have a sufficient mulch ring around the base and leave it at that.

If this is not an option, shade-loving plants with a shallow root system such as Cutleaf Stephanandra, Coralbells, Trevi Fountain Lungwort may work. You may have to experiment and see what might work for you.