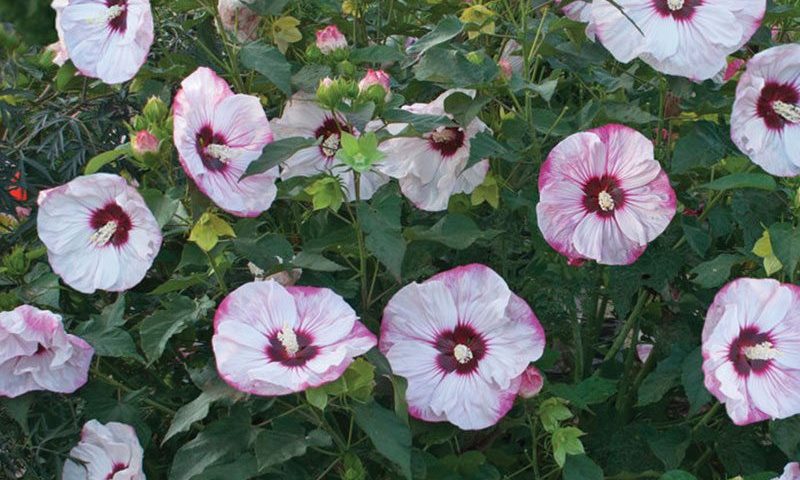 Featured Image: Hibiscus 'Cherry Cheesecake' PPAF
**If you are unsure if this method is best for your plant, search for your plant here in our knowledgebase and scroll down to the maintenance section within the plant's profile.**

When should you prune?
- Annually or as needed
- Pruning occurs just prior to bud break (March or early April)
- Warning: If you prune in summer, especially on a badly stressed shrub of an inappropriate species, this method may kill
- Case specific: See ‘yearly’, ‘every few years’, and ‘never’ sections below

Why use rejuvenative pruning?
- Promotes new growth
- Helps prevent “floppiness” in some plants
- Removal of ALL canes at ground line

While thinning cuts is a gradual process of removing older wood from shrubs over a period of time, rejuvenative pruning is a one-shot approach. You remove every stem and branch just above the ground. Rejuvenative pruning should be done just prior to bud break in March or early April, when the plant has the most stored energy. Pruning in spring rather than winter also allows the old stems to help insulate the plant and reduce snow and ice damage. Rejuvenative pruning should not be done every year on most plants (and never on some) because a massive amount of energy is needed to regrow branches and produce woody material. However, this method works extremely well on honeysuckle, lilacs and a few others.

Yearly
Warning: Not all hydrangeas are pruned this way and can be damaged if done so. Annabelle hydrangea are unique among shrubs in that they benefit from annual rejuvenative pruning. Annabelle's bloom only on new wood and, unless annually pruned back, they become floppy from the large flowers. New Jersey Tea and the large Dinner Plate Hibiscus can also be rejuvenative pruned yearly. These shrubs act more like perennials in that most of the top dies back each winter, and so all above ground stems can be cut back.

Every Couple Years
Dogwoods, Lilacs, Potentilla, and Spirea are examples of shrubs that should only be rejuvenative pruned every few years. They will respond with a large flush of growth, but like stated above, this requires large amount of energy and can shorten a plant’s life if done too often. Shrubs that have been left to grow wild for extended periods of time may also benefit from rejuvenative pruning. If the shrub has become very woody and is producing very few (if any) new shoots, rejuvenative pruning may provide a fresh start and encourage new, vigorous growth. A good example of this are old Lilac shrubs that have become leggy and sparse without any young branches.

Never
While some plants benefit from rejuvenative pruning, other plants resent this type of pruning. If done at the wrong time, or on the wrong type of plant, this approach can kill a shrub. To stress again, rejuvenative pruning should NOT be used on all shrubs, done yearly, and never used on evergreens. And if you prune in summer, especially on a badly stressed shrub of an inappropriate species, this one-shot approach can kill.