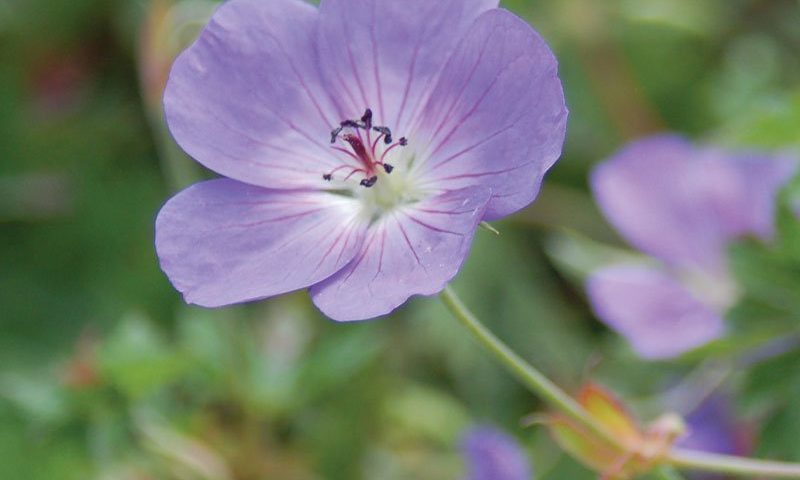 Large, single, violet-blue flowers with white centers bloom relentlessly from June until frost above compact mounds of dark green, lightly marbled foliage. An excellent easy-care choice for the border or in masses where consistent, reliable flowering is needed.

Rozanne Geranium is versatile; plant it in masses for borders, around trees for a living mulch, or as a high groundcover with prolific flowering. It’s more drought tolerant than Astilbe selections and is a worthwhile option when planting in tough, partially shaded areas. These tougher site conditions can even restrain the plant’s vigorous growth and lead to a tidier, more compact appearance.

The prolific blooming period (early summer through fall) is great if you want a consistent mass of violet-blue flowers to build your color palette around. The fragrant, soft medium-textured foliage is versatile and pairs well with a variety of plants, hardscaping components, and building materials. Whether your home is white stucco or deep red brick, Rozanne Geranium won’t offend the eyes.

The only reason we don’t give Rozanne Geranium the Urban Approved qualification is that although it’s adaptable to many average sites, it lacks performance in the extremes found in parking lots.

While Rozanne Geranium has an exceptionally long bloom period and doesn’t require much for maintenance, it is not of special importance to any native insects or wildlife. The aromatic foliage resists deer and rabbit browsing, and you will probably see bees visit the flowers in bloom. However, if you’re looking to attract a bevy of pollinators consider other options.

Rozanne Geranium may stop blooming in late summer (August) when temperatures are high and moisture availability is low. Don’t worry! This is the plant conserving energy when the environment is more stressful. It will resume blooming once climate conditions improve.

If you seem to have bad luck with Rozannes, try planting them deeper. While we recommend planting most perennials evenly with the surrounding soil, we’ve found that Rozanne Geranium benefits from having its crown planted one inch below grade. Plants that are buried in this manner seem to have much greater success over wintering compared to Rozanne Geraniums that are planted at level with the landscape.

Rozanne Geranium doesn’t exhibit any noticeable resistance to leaf spots and rusts, the two main diseases that affect Geraniums. These are rarely (if ever) fatal to the plant, so rest easy if your Rozannes look a little sad after a particularly hot and wet spell.

First year plantings can look sprawling and unsightly but don’t be fooled! Give it a year and they will mass nicely. Excessively sprawling plants can be cut back 2/3 once established to keep their habits more contained.

Rozanne Geranium is a cross between Geranium wallichianum ‘Buxtons Variety’ and an unnamed cultivar of Geranium himalayense. It was discovered by (and named after) Rozanne and Donald Waterer. With the help of Paul Gooderham at Blooms of Bressingham, the new cultivar was launched at the 2000 Chelsea Flower Show. Since then, it has received numerous awards both in the U.S. and in the U.K.

The new selection was characterized by its compact habit, profuse and continuous flowering, and large single violet-blue flowers with white centers. It is adaptable to a variety of sites and is a prolific, reliable bloomer in our region.

The genus Geranium contains around 300 species and countless cultivars. It is also known as Cranesbill due to the resemblance of its fruit to a Crane’s head. However, you won’t see this on Rozanne as it is sterile and the flowers never form the characteristic ‘Cranesbill’ shape found on other Geranium cultivars (see Karmina Geranium or Bevan’s Variety Geranium)

Great as a border but of average height, Rozanne Geranium should be paired with taller plants in the mid-border and background. Pair with Zagreb Coreopsis for contrasting flowers and foliage texture, or Palace Purple Coralbells in sun or shade. Use it around Panicle Hydrangea cultivars like Bobo and Little Quick Fire to soften their transition into the landscape. Or do what you want! This is a versatile plant that can be used in any number of ways in the landscape.

I would recommend not planting Rozanne Geranium with aggressive spreaders like Lady’s Mantle or Vinca as they may compete too much. The same goes for low-vigor plants that may not compete well with Rozanne Geranium.