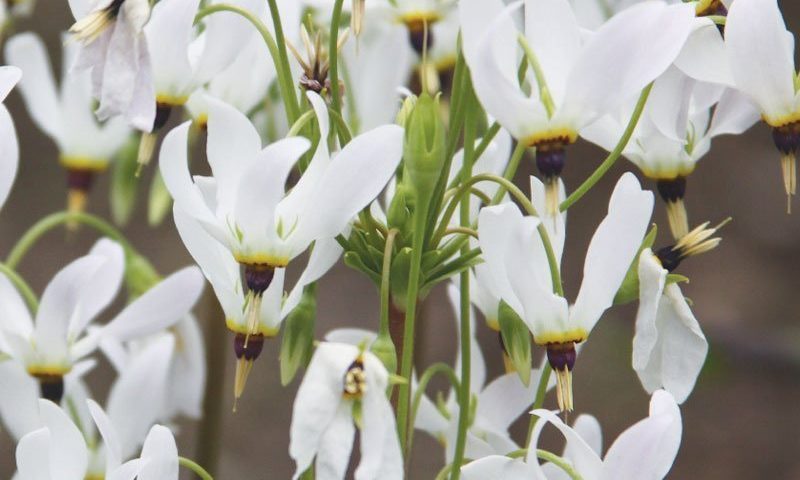 Shooting Star is a beautiful spring ephemeral native to Wisconsin. Their appearance marks the beginning of the growing season. First, a rosette of broad, long, green basal leaves appears. Flower stalks emerge in mid-spring, birthing umbels of unique white to pink flowers that hang upside down. Reflexed petals that reach straight back up toward the sky add to its charm, and give the flower the appearance of its namesake, a shooting star.

May also be known as American Cowslip and Prairie Pointers.

At home in moist, sandy, or rocky soils, Shooting Star can be found in prairies, meadows, and open woods. In fact, early settlers called this plant “Prairie Pointers,” as they were markers of a prairie landscape. They are also often found on slopes, likely because there is less competition from other plants.

Due to their small size, by the time the flowers have matured into rather attractive mahogany-colored seed pods, they are often obscured by other later-season perennials. By mid-summer Shooting Stars have already gone dormant due to their ephemeral nature.

Although this perennial has a very short growing season, it is still a show-stopper. At a time when winter has finally come to a close and the snow has melted down to expose brown bare earth, when we humans are taking our first walks searching diligently for the first signs of life in spring, this little gem is a welcome, uplifting sight. Medicine for the soul.

Plant this in a meadow garden or a wildflower garden. It would be best to plant Shooting Star toward the front of the bed and surround it with a shorter groundcover so that they do not become obscured by taller garden perennials.

It is interesting to note that Shooting Star does not produce nectar. As a result, honeybees are not frequent visitors to these flowers. However, Bumblebees, Long-horned Bees, and other native bees do visit the flower for its pollen. According to the Lady Bird Johnson Wildflower Center, the pollen is trapped inside a structure formed by the fusion of its pistil and surrounding 5 stamens. As a result, the bees collect the pollen by vibrating their bodies against the fused reproductive parts to free the pollen. In layman’s terms, you may catch a Bumblebee buzzing loudly with its head in the tube. The buzz is the sound of the bee causing enough vibration to shake the pollen out of the tube. This is the only way to get it out and Bumblebee queens have got this technique down to a science.

Reduce competition by weeding around the basal leaves, especially after it has gone dormant.

To ensure the flowers and resulting seed pods are showcased in the best way, be sure that weeds are cleared and taller perennials are planted behind Shooting Star.

No serious pests or diseases.

An ephemeral perennial is with us for only a few months each year. It makes an early appearance in spring, and if you aren’t looking for it, you’ll miss it! And that is part of its charm, no?

Practically speaking, do not be alarmed when the plant goes dormant in the summer!

The genus, Dodecatheon, is in reference to the 12 Greek gods. The word can be broken down into two Greek words, ‘dodeka,’ meaning “12” and ‘theos,’ meaning “gods.”

It is said that Linnaeus (the Swedish botanist who formalized binomial nomenclature) thought the flowers in this genus were so beautiful that he named them after the gods. On the other hand, it is also said that the original 12 Greek gods favored primroses and took special care of them.

The structure of the flower gives it a unique beauty, but Darwin theorized how its structure would yield biological benefits. The pistil and stamen hang upside down, with the pistil being slightly longer. As the pollen is released from the anthers, gravity brings the pollen dust to the stigma, causing fertilization. The petals are thought to be reflexed as this prevents rain and dew from washing the pollen dust off the anther before the flower can be fertilized.

Prairie Dropseed, Wild Geranium, Prairie Phlox, and Nodding Pink Onion would be right at home in a bed with Shooting Star. If the bed is large enough and has some shade that keeps the soil cool and moist enough, then try Lady Fern, Jack in the Pulpit, and Canada Wild Ginger.