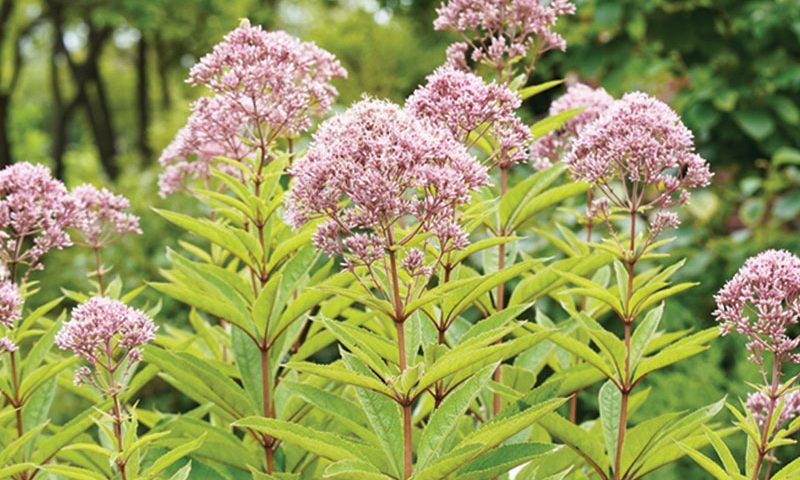 Spotted Joe-Pye Weed is a Wisconsin native perennial with umbels of light pink flowers that sit atop spotted stems that can reach up to seven feet tall! You may have seen it in wet prairies, meadows, wetlands, swamps, riparian areas, and even in the occasional ditch. If you see it in your ditch don’t count it out, consider yourself lucky, it’s a diamond in the rough!

You may also know this plant as Queen of the Meadow.

Overall, Spotted Joe-Pye Weed has a rather understated look. Above and below sets of whorled leaves is a clean, unbranched stem. On top of this simple structure are sets of flowers that are a very soothing, humble-yet-eye-catching shade of pink.

Spotted Joe-Pye Weed prefers fertile, damp, sandy soil; however, it can tolerate clay and occasional flooding. It feels at home near a pond or stream. Take advantage of this perennial’s love of moist soil by planting it in a low spot or ditch, near downspouts, or in a rain garden.

The small, fragrant flowers attract many pollinators in the late summer months, making this an excellent addition to pollinator/butterfly gardens. Due to its height, plant Spotted Joe-Pye Weed in the middle section or background to add height without blocking smaller species. Use its size to your advantage to block the view of unsightly yard objects such as AC units, septic systems, and well caps.

Spotted Joe-Pye Weed requires full sun. Keep in mind that areas with partial shade in the afternoon are also appropriate. The occasional shade is good protection from the highest heat of the day and helps to prevent the soil from drying out.

This is a legit pollinator plant. All types of bees; Rusty Patched Bumble Bees, Leafcutter Bees, Long–horned Bees, Cuckoo Bees, and bee flies visit the flowers for their nectar.

Many butterflies and skippers, like the Monarch Butterfly, Eastern Tiger Swallowtail, Azures, and Byssus Skipper, drink the flowers’ nectar. Moths such as the Ruby Tiger Moth and Eupatorium Borer Moth also feed on the nectar. The Eupatorium Borer Moth larvae feed on Spotted Joe-Pye Weed roots while the larvae of the Ruby Tiger Moth feed on the foliage.

Some birds have been observed feeding on the seeds, namely turkeys, waterfowl, grouse, mallards, and even some sparrows.

Mammals tend to avoid Spotted Joe-Pye Weed. Although, they may nip the occasional leaf.

Prune to the ground in winter. If planted for the purpose of restoration, leaving them up over winter provides shelter for insects. They can then be cut down in spring.

Spotted Joe-Pye Weed spreads by rhizomes to form small colonies. Numbers are easily controlled by division in spring or fall.

No serious diseases are known to affect Spotted Joe-Pye Weed.

Powdery Mildew can affect the foliage. Be sure to plant in a well-ventilated area and remove affected leaves or stems.

If sited in a location that does not have reliably and consistently moist soil, then it must receive supplemental water. Otherwise, the leaves may scorch in the heat of summer. This is compounded by exposure to late afternoon sun.

Spotted Joe-Pye Weed may flop when it reaches its full height, especially when full of seeds. To avoid this, plant beside other tall plants sturdy enough to provide support. Staking stems can also help. Stems can be cut down to half in mid-June to slow their growth and force a shorter plant less likely to droop.

Name:
The Genus name, Eutrochium, is derived in part from the Greek root word, ‘troche’, meaning “little wheel.” This likely refers to the leaves growing from the stem in a whorled pattern.

The species name, maculatum, means “spotted” in reference to the purple spots on the stem.

Joe-Pye is a reference to a Mohican healer named Joseph Shauquethqueat who is said by some to have used the herb to treat several illnesses in the 1700’s. Some sources say that his nickname was “Joe Pye.”

Medicinal Uses: Leaves were harvested and dried before flowering and used as a diuretic to treat issues involving the kidney, as well at rheumatism. The roots were dried in the fall and later used to make a tea that treated not only kidneys and rheumatism but was also used to break fevers by inducing sweating. For this reason, it was very useful against Typhoid in the 1700’s.